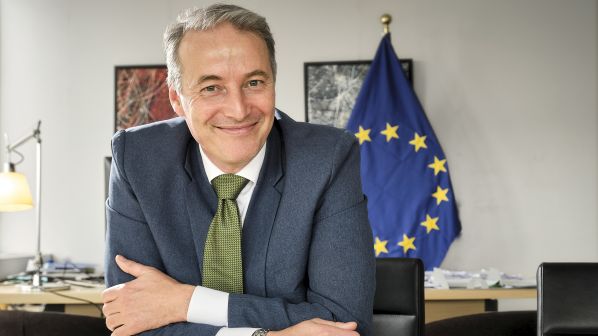 SIX months into his new role as director, land transport at DG Move within the European Commission (EC), Mr Kristian Schmidt has a lot of work ahead of him to implement the major initiatives required to meet the rail sector’s goals.

Rail is at a critical point. On the one hand, it is beginning to plot its recovery from the Covid-19 pandemic, which decimated passenger ridership and heavily affected finances. But on the other hand, the sector is riding a wave of momentum brought about by the European Year of Rail and the inclusion of rail as a major tool in the European Union’s (EU) Fit for 55 policy, which outlines how the EU will become climate neutral by 2050. The name comes from the EU’s goal to reduce CO₂ emissions by 55% by 2030.

In order to capitalise on the momentum, Schmidt says there are a number of challenges that the rail sector must address and where the EC has a clear role to play, including facilitating the balance between competition and integration.

“There needs to be centralised, top-down steering on some issues [such as] interoperability and standardised approval of rolling stock,” Schmidt told IRJ while sitting on the Connecting Europe Express (CEE) as it travelled through Germany on its way to Denmark on September 30. “It’s a network industry so standardisation of timetables is going to be something that requires central steering. And some of it has to be moved from a national level to a European level.”

Earlier in the day, track access charges were a topic of strong debate at the Building up a Network of Long-Distance Rail Services conference in Berlin, hosted as part of the CEE. Schmidt said he had tried to point out to the panellists and delegates that lowering track access charges did not have to equate to lower revenue for the infrastructure manager.

“We have three sources of revenue for the infrastructure manager,” he says. “There’s the subsidy from the taxpayer and there’s the track access charges generated from the operators, but there is also what people see as an invisible thing, the potential of growing the market.”

He points to Spain and Italy, where the liberalisation of the high-speed rail markets has increased passenger numbers and resulted in the introduction of new services, thereby generating additional track access revenue.

“Competition doesn’t necessarily mean undermining stability of the publicly funded infrastructure,” Schmidt says.
Schmidt appears to be applying this measured approach to a range of issues facing the rail sector. Asked how the EC should decide whether to let the market take its course or introduce a regularity steer on many of the issues, Schmidt said a good method was to “wait and see.”

“Can it deliver, for instance, flexible capacity allocation for freight?” he asks rhetorically. “I think right now you can conclude the certain preferred model doesn’t work. Can the market deliver a fully multi-modal integrated booking system, where with one click you as a customer can go from A to B or A to D while passing by B and C without losing your rights? The answer to that is we are still waiting. That kind of system has been technologically possible since the 19th century. The UK had a clearing house for its various railway companies so it’s not a question of technology.

“It is better to wait and see whether others do it before you invest in ERTMS or in automatic couplings, it’s risky to be the first and that’s inherent to the system.”

Therefore, you must ask yourself, if it hasn’t happened yet, is it perhaps because there are certain commercial vested interests going against it?”

Such a system is being discussed by European operators that have promised to deliver, but the question is whether they are delivering as fast as they could.

“I think it’s becoming sufficiently urgent to say we’ll give you the benefit of the doubt for a little longer but this is too important to be left unattended,” Schmidt says. “And therefore, you could say [there is a need for] regulation. And it doesn’t have to be black and white, because the regulator can also step in to give legal force to what the private sector is working on. So you can say you’ve found the solution, but you can’t make it stick, you can’t enforce it. The regulator will come in and give it legal force.”

This legal force may be used when combating the first mover disadvantage that Schmidt says is built into the sector, including for pertinent current topics such as the implementation of Digital Automatic Couplers (DAC).

“It is better to wait and see whether others do it before you invest in ERTMS or in automatic couplings, it’s risky to be the first and that’s inherent to the system,” he explains. “So sometimes the only way you can overcome that is to say ‘I don’t care how much it costs, but by this deadline, you have to run on this system.’ Because otherwise, nobody’s going to do it, nobody’s going to be the first one.”

Under the EU DAC rollout strategy, 500,000 freight wagons and around 17,000 locomotives across Europe may need to be retrofitted by 2030. Enacting a quicker change from traditional couplers could save money in the long term and avoid the sustained period of inefficiency that will result from operating two parallel systems.

“Europe has steered the process to select the technology and resourced the research,” Schmidt says. “But what more can we do? We can probably give it regulatory force by saying it must be implemented by this deadline. But I can already foresee that there will be member states asking ‘why should we,’ and who would oppose such a council decision, to say we don’t really need this and if you force us you’re going to have to pay for it.

“We have 27 member states who are not all at the same starting point. Some are struggling to simply survive after Covid and others are trying to rebuild infrastructure after decades of neglect, so they will say ‘we know we should invest in rail, but we’ve got other things to do first before we do digital automatic couplings.’”

Prior to his appointment at DG Move, Schmidt, a native of Denmark, was the EU ambassador to Myanmar from 2017 to 2020, to Uganda from 2013 to 2017, and director at the Directorate-General for International Development Cooperation (DG Devco) from 2010 to 2013.

Schmidt’s remit as director of land transport also includes road, and as such he has a broader view of how rail compares with other modes. He warns that the sector cannot become complacent as the most environmentally-
friendly mode of transport, with sales of electric cars already accelerating in places such as Germany and Denmark.

The EU has identified the need to ensure there is a level playing field for decarbonised transport modes. “I do hope that this doesn’t lead to complacency in thinking that means more public money and we can just continue with the current business model with more money,” he says. “Because rail is greener, but road will decarbonise as well.

“And with the current resilience facility, our pandemic crisis package, we are going to see charging stations being rolled out across the EU very fast. And so it’s perfectly realistic to expect that by 2030, we’re starting to see the end of the combustion engine in the private car, and you’ll no longer have a need to take the train just because it’s green.
Rail freight also needs to adapt and change to meet the demands of a new market if it is to grow as the market moves away from bulk cargo such as coal towards multi-modal freight.

“If I’m with DHL, I don’t know a year in advance that I will require this amount of capacity on that route,” Schmidt says. “I want flexibility, and I want to know that next week when I have this thing, it will arrive at the production site in Stockholm or wherever. I’m afraid the sector is not geared up for that.”