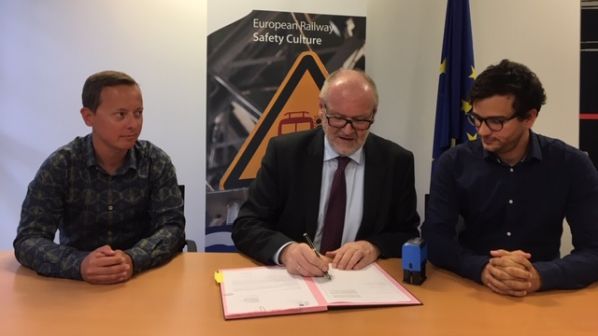 UNDER the European Union’s (EU) Fourth Railway Package, the EU Agency for Railways (ERA) is mandated to issue single safety certificates and vehicle (type) authorisations which will be valid in multiple EU member states. To achieve this, ERA has set up a one-stop shop to deal with all applications for single safety certificates, vehicle authorisations and ERTMS trackside approvals. ERA is also responsible for ensuring the interoperability of ERTMS as part of the development and implementation of the Single European Railway Area.

EU member states were supposed to transpose the Fourth Railway Package into national law by June 16 2019, but only eight countries met the deadline with the rest following one year later.

“Initially, I was very disappointed when only eight countries were ready,” Mr Josef Doppelbauer, executive director of the EU Agency for Railways, told IRJ during ERA’s ERTMS conference staged in its home town of Valenciennes, France, in October. “But there was also an advantage as it was easier to start with only eight member states which meant less workload initially and enabled us to have a ramp up. It has been a huge learning curve for both us and the applicants.”

Doppelbauer says that applicants fall into three categories: early movers, laggards, and those that don’t even know the one-stop shop exists.

“We have already learned a couple of lessons,” Doppelbauer says. “First, with this system of European authorisation we have created an environment which makes the railway system much more European. At the same time, the regulatory framework is more useful and of higher quality. For example, the register of vehicle types was not completed consistently by the National Safety Authorities (NSAs), because there was no real need to do so, whereras it is a pre-condition for us. Now, prior to issuing an authorisation, we must ensure the register is updated. Likewise, notified bodies (NoBos) are filling in the database of certificates more consistently.

“We now have practical daily working arrangements between our staff and the NSAs in France, Italy and the Netherlands which are the most significant countries in the first wave. The other five countries are Bulgaria, Finland, Greece, Romania and Slovenia.

“We can see that real teamwork and a common view is developing because we have to solve issues jointly. It remains to be seen whether we can maintain this dynamic when the remaining member states join in June 2020, but so far the initial experience has been quite good.”

Doppelbauer says he is very positive regarding the launch of the one-stop shop. “We have reached our target of 99% availability,” he says. “We had seven hours downtime in August not for the one-stop shop itself but of the stakeholder management system which manages user accounts. Apart from this, the one-stop shop has worked reliably, and applicants have found it very useful and straightforward.”

One challenge facing ERA is that it is obliged to accept and respond to applications in the EU’s 24 official languages. ERA tried an automated system within the one-stop shop, but this did not work, so it reverted to a manual system, whereby the documents are formatted in Microsoft Word, signed, scanned, and uploaded. “It is a bit more cumbersome, but it is a pragmatic solution,” Doppelbauer says. “By the end of 2019 we want to bring back automatic generation for conformity to type authorisations and then gradually for the other types of vehicle authorisation. So, when the next bunch of member states arrives in June, we will be better prepared.”

“I have set a deadline, so that by mid-2021 we must be at cruising speed, we want to maintain our reputation in two areas: the correctness of our decisions and the reaction time to requests from our clients.”

Josef Doppelbauer, executive director of the EU Agency for Railways.

ERA issued its first single safety certificate on September 16. And by the time ERA celebrated the first 100 days of the one-stop shop, it had received 172 valid applications for vehicle authorisation, eight single safety certificate requests, and an initial engagement for three ERTMS trackside approvals. “The majority of the applications were for freight wagons, but a lot are for batches of wagons representing more than 2000 vehicles,” Doppelbauer says. The second most common application is for locomotives for operation on the freight corridors.

Doppelbauer says the main challenge now is to manage the full transposition of the remaining member states and complete the conversion of ERA into a Europe-wide safety authority. “I have set a deadline, so that by mid-2021 we must be at cruising speed,” Doppelbauer told IRJ. “We want to maintain our reputation in two areas: the correctness of our decisions and the reaction time to requests from our clients.”

Typically, there is a learning curve for applications for safety certificates and vehicle authorisations. When ERA receives an application from a new client, it contacts the client to see what is missing and what needs to be improved. New applicants often find the process difficult because they do not always understand the correct regulation or submit the right document. But, Doppelbauer says that by their third application the process goes very smoothly.

ERA is also having to adapt to its new role. “In the past, we were mainly making recommendations for new Technical Specifications for Interoperability (TSIs), but now we have to apply them,” Doppelbauer explains. “It is now a two-way approach because the authorisation team get understanding from the originators regarding a rule, but the TSI team also learn the practical implications of their decisions. This enables us to have better quality regulations because we have a closer feed-back loop within ERA.”

As far as ERTMS is concerned, ERA’s biggest challenge is to come up with a new TSI in 2022. As ERA must submit its recommendation to the European Commission (EC) by mid-2021, it started work straight after the ERTMS conference in October. “We must maintain the progress achieved in particular regarding the stability and compatibility of ERTMS and allow for the integration of the new Future Rail Mobile Communication System (FRMCS), ATO and ETCS Level 3,” Doppelbauer says. “One of the key enablers for these game changers will be modularity: we need a more modular structure for ETCS.

“Regarding ERTMS trackside approval, ERA is a kind of cross-project information sharing platform which will result in better harmonisation of the implementation of ERTMS at the European level.”

As part of ERA’s digital agenda, the agency is preparing a digital road map for data interoperability. “Having removed the physical barriers to interoperability, we should avoid the pitfall of building new digital silos as more digital technologies are introduced,” Doppelbauer explains.

“Safety culture, which I should have mentioned first, along with human and organisational factors, completes our list of priorities for 2020.” ERA now has about 150 signatories to its European Safety Culture declaration, but to accelerate the process it has adopted a new approach to get people to sign up. In October, the Dutch NSA invited all railway operators in the Netherlands to a meeting. “We got 24 signatures in one go to sign the declaration through peer pressure,” Doppelbauer says.

“It is really important to create a European safety culture. Human factors have played a role in virtually every significant railway accident. ATO will help to limit the impact of human factors, as will a better man-machine interface to avoid misinterpretation of safety rules.

“Our overarching goal is to create better conditions for rail transport in Europe so that we can link all major European cities with efficient railway connection. We want to create the conditions to make short-haul flights largely superfluous and drastically increase rail freight to reach the 30% market share target.”

While Doppelbauer recognises that effectively doubling rail freight’s market share in Europe is a huge challenge, he points to North America where rail already has a market share double that of the EU target. Doppelbauer says this is partly due to North American railways being completely interoperable. If Europe can sweep away the barriers to interoperability, then rail freight will have a much better chance to flourish.