Evolution not revolution for heavy haul

Gary Fry and Austin Allard* argue that while heavy-haul freight development has reached the point where there is no longer a need for further intensive research, there are still opportunities for improvement. 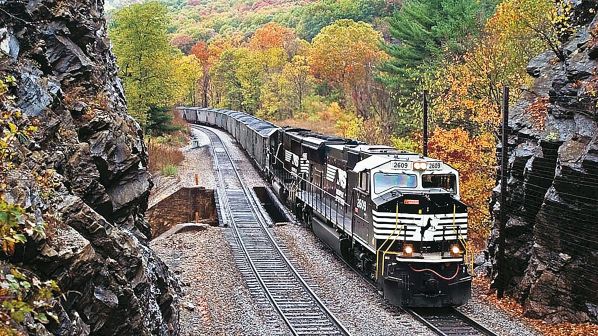 THE photograph shows a modern heavy-axleload (HAL) coal train crossing a bridge. Each fully loaded wagon weighs 130 tonnes and each axle supports more than 32 tonnes. This axleload is effectively the maximum permitted currently for service under the rules of “free/unrestricted interchange” in North America. In captive service on a single railway, however, some trains in North America operate with axleloads of up to 36 tonnes, while in Australia the axleload is 42 tonnes, currently the heaviest in the world.

Although considered routine today, freight wagon axleloads that exceed 30 tonnes have not always been considered the norm for HAL operation. Prior to around 1970, a normal heavy axleload was 23 tonnes. By 2010, 32-tonne axleloads were widespread in North America representing a 40% increase.

Over the same 40-year period in the United States, the train derailment rate per million train-km decreased by more than 80% according to the Federal Railroad Administration (FRA). Those four decades of research, development and implementation (RD&I) represent a notable period in rail freight history and globally as well.

In terms of safety and efficiency enhancements, the outcomes of HAL RD&I efforts completed between 1970 and 2010 are remarkable, but there are opportunities to do more. There are still many RD&I target areas that offer potential to further enhance heavy-haul rail freight.

To help narrow things down a bit and guide our thoughts toward desirable RD&I objectives, we should consider two trends. First, widespread interest in increased axleloads beyond current levels all but ended 20 years ago. This is a practical conclusion from credible economic analyses that projected resulting cost increases that outweigh projected increases to revenue. Second, in terms of recent safety performance, the derailment rate per million train-km in the United States has stabilised over the past 10 years; vacillating between 1.1 and 1.3, it averages 1.2 according to the FRA.

With that as a background, we can infer that most future efficiency gains will probably involve changes to train operation other than axleload increases. We can also infer that the current paradigms for railway inspection, maintenance and operation seem to have reached a limit in their ability to drive further safety gains.

With an aim towards improving both safety and efficiency, five recommendations for RD&I target areas come to mind directly:

The first target is to strategically increase train length, especially for long-haul trains, and the longer the better. In fact, there are no theoretical limits as to the maximum weight or maximum length of a freight train. But there are certainly practical limits that arise from economic, social, political, technological, geographic, geologic, and topographic constraints, all of which must be managed effectively to be successful. There are many solutions yet to be discovered in this space that will ensure enhancements to both safety and efficiency.

The second target is to develop robust and secure technology to support more automation of train operation, and there are a number of potential safety and efficiency gains to be derived here.

The third target is the production of much longer rolled lengths of rail at rail mills, again the longer the better. This will reduce the number of welds in track, simultaneously reducing both the maintenance effort and future risk of rail breaks in service.

The fourth target is continued support for the development of robust automated defect detection technology for railway infrastructure and rolling stock, preferably using train-in-motion (TIM) technology. In general, it is very beneficial to inspect engineered systems when the systems are in use and performing under load.
The fifth target is machine learning, possibly in combination with predictive analytics and Big Data approaches. Especially when combined with TIM automated inspections, machine learning algorithms offer powerful potential to support strategic resource allocation decision-making.

Several essential features of infrastructure data streams and methods for processing them are introduced here in the context of assessing a timber railway bridge: in other words, a combination of areas four and five. In this example, a TIM system was developed to assess a “soft-span” that had built-in structural impairments. As a result of the asymmetrical impairments, one side of the span deflected twice as much as the other: 20mm versus 10mm. Figure 1 is a schematic drawing of the bridge.

All TIM detection systems must be designed, if not optimised, to generate data streams that are rich in diagnostic content so that defects can be flagged reliably. The underlying design logic of the TIM system in this example is as follows. First, serious structural impairments in railway bridges cause increased bridge motions under live train loading. Secondly, bridge motions contribute to the overall dynamic responses of rail vehicles that cross bridges. And thirdly, the dynamic responses of a rail vehicle can be measured by sensors attached to the vehicle.

Here is the penultimate goal: using appropriate signal processing algorithms, bridge motions can be estimated by operating on the measured dynamic responses of rail vehicles crossing the bridge. In this way, a bridge can be “dynamically assessed” to some degree every time an appropriately instrumented rail vehicle crosses it. Ultimately, as the final assessment procedure, measured motions of a bridge can be compared against threshold values of motions that are considered safe. This type of assessment would not replace all periodic visual inspections of bridges but would work in tandem with them to identify and prioritise bridges that are most in need of maintenance.

Figure 2 is a schematic drawing of the two bogies that were instrumented in this study. An accelerometer was installed on the bearing adaptor over each wheel: eight in total. The testing comprised several passes of the short train at speeds ranging between 15km/h and 80km/h.

During testing, actual bridge deflections were measured using 48 displacement transducers installed between the bottom of the spans and the ground surface. Measurements on the moving train and on the ground were synchronised though a digital optical technique using photo resistors. A machine learning technique utilising competitive arrays of neural networks described by Fry and Hyland (1999) and further refined by Fry and Story (2013A, 2013B, 2013C, 2014) was used to process the time histories of data collected from the bogies. At train speeds exceeding 50km/h, the span deflections estimated from the onboard TIM system were within 10% or roughly 1.5mm of the maximum span deflections measured by the displacement transducers on the ground, which is considered excellent agreement.

With this article, we are acknowledging the end of the need for further intensive research focused on heavy axleloads. Just a maintenance level of effort is appropriate from now on to ensure we maintain an ability to chase targets of opportunity as they arise and in support of reliability growth testing of new heavy-haul railway technology.
We must keep in front of us the substantial progress gained over the past five decades and not lose any ground. But the bulk of our creative attention, time, and, most importantly, funding should be directed elsewhere as we look to further enhance the efficiency and safety of heavy-haul rail freight.

In the near-term, a comprehensive and global focus on enabling technology for very long train implementation, automated train operation, and automated inspections under dynamic loading are likely to prove essential in attaining future gains in both safety and efficiency.

Funding for the Vehicle-Borne Autonomous Railroad Bridge Impairment Detection Systems was provided by the United States Department of Transportation through the University Transportation Centre for Railway Safety.