South Africa is opening its network to private freight operators in an effort to encourage investment and improve the economy following the Covid-19 pandemic. Mesela Nhlapo, chief executive of the African Rail Industry Association (Aria), explains to David Burroughs how the system will work. 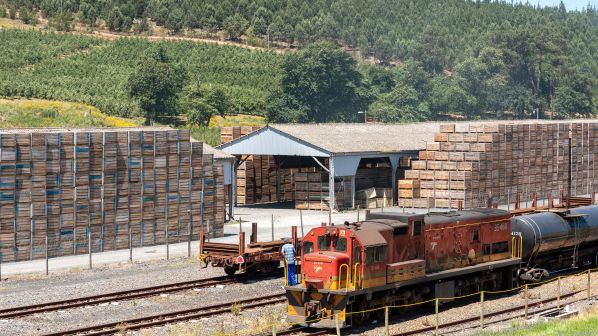 AFTER more than a century of rail freight services provided by government-owned operators, South Africa is undergoing a process to open the network to private third-party operators in a move that is hoped will increase freight volumes and generate more revenue and investment.

The plans were first introduced in November 2020 by South African president, Mr Cyril Ramaphosa, during the announcement of the Economic Reconstruction and Recovery Plan, which featured a number of key structural reforms to revitalise the South African economy. The plans also included the establishment of a Rail Economic Regulator.

Rail freight services across the country are currently provided by Transnet, which also manages part of the network, while 1067mm-gauge suburban passenger services are provided by Prasa and long-distance trains by Shosholoza Meyl. Under the new proposal, private freight operators would be able to apply to operate in the market, with the finance minister, Mr Enoch Godongwana, announcing in November 2021 that this is expected to be implemented by the end of 2022.

“Covid pushed us as a country to look at alternative ways of growing the economy, by having greater private sector participation in the rail space,” explains Ms Mesela Nhlapo, chief executive of the African Rail Industry Association (Aria).

Studies undertaken by legal council hired by the private sector and others conducted by a unit set up by the deputy minister of finance’s office both concluded that no new legislation is required to allow the introduction of third-party operators. A bill to establish the economic regulator is still currently pending.

“We don’t think we need the economic regulator immediately, if there’s a dispute between the state and private sector, we have good competition laws in South Africa so that could be an avenue,” Nhlapo says. “So practically there is nothing that is stopping the private sector, it’s just a matter of covering grey areas from the government perspective.”

While the legal basis for third-party access is in place, work remains to draw up the track access agreements and determine how paths are allocated by Transnet. Nhlapo says this is the period where it is important to have input from all potential stakeholders, so that the private sector can come to a consensus of how it expects this to work before approaching the government with its proposals.

“We don’t expect them to be rail experts overnight, particularly on the third-party access,” Nhlapo says. “We have to work together with government to deliver this third-party access as soon as possible because we need to grow our economy. Covid has caused so much damage, so we need to create jobs, we need to attract foreign investors, we need to have an economy that works.”

“The Africa that was colonised is no more, and if you want to do business successfully on the continent you need to work with the locals.”

“[The question is] how do we work that out, because Transnet has said they don’t want to find themselves favouring one over the other,” Nhlapo says.

The additional revenue created by the third-party operators could be a boon for Transnet, which posted a Rand 4.8bn ($US 300m) loss for the 2021 financial year and was recently downgraded by ratings agency Moody’s from Ba2 to Ba3.

Nhlapo says that as well as increasing revenue, growing volumes on the line has the secondary benefit of reducing the costs required to maintain roads in the area, as the number of lorries decreases.

While boosting internal freight volumes, the policy could also improve cross-border rail traffic, especially following the ratification of the Luxembourg Rail Protocol, which is currently underway in South Africa.

While capacity on many of the iron-ore and coal lines in South Africa is at between 80-100%, other general freight lines are at only 70% capacity. According to one estimate, up to 58 million tonnes of freight could be moved from road to rail per annum across the network, creating a large opportunity for new entrants.

“That can only be done through proper partnerships with international investors and manufacturers, in collaboration with the African people, and I do not support any form of partnership that is not a true partnership,” she says. “The Africa that was colonised is no more, and if you want to do business successfully on the continent you need to work with the locals, not because government says so but because it’s in the best interest of your business to do so.”