The Scottish government wants to shift freight traffic from road to rail to support economic development and help meet climate change targets. Kevin Smith looks at the plans and the obstacles to fundamental change. 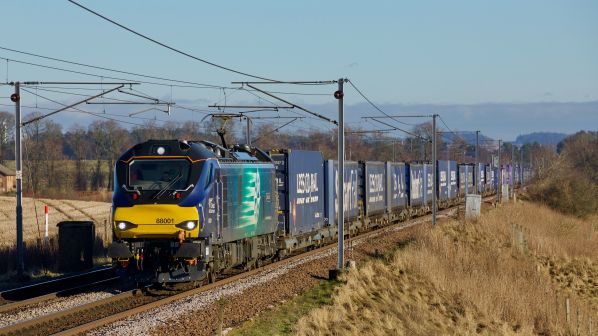 THE decline of the Scottish coal and steel industries in recent years, once the mainstays of the rail freight sector in the country, has led to a major rethink of how rail freight can continue to serve and help to strengthen the Scottish economy.

The Scottish government, like others around Europe, hopes to boost rail freight flows to support economic development and minimise the environmental impact of freight transport. Indeed, in the introduction to Transport Scotland’s latest Rail Freight Strategy, published in March 2016, transport and islands minister, Mr Derek Mackay MSP, says that the Scottish government and industry must work together to identify new markets and areas for growth.

Mackay says he supports a can-do approach, and confirmed that the government will invest alongside industry in “whole systems” solutions and innovations which can meet the needs of the modern market. “By delivering this rail freight strategy in partnership, I am confident that we can create the conditions for a sustainable, high quality, highly efficient rail freight industry that Scotland needs, wants and deserves,” he wrote.

Specifically, the strategy outlines the means to bring “rail freight to life.” This includes embracing innovation to break down barriers to freight transport; improved cooperation between all active players in the sector by building suitable strategic partnerships; promoting the benefits of rail; and investing in the infrastructure required to deliver success.

Consistent with Mackay’s emphasis on the importance of working together, the “facilitation” section sets out the importance of Network Rail’s (NR) role to support the business development of rail freight in Scotland by providing the level of rail infrastructure required.

For Mr Bill Reeve, director of rail at Transport Scotland, this is critical to create a situation where the unit cost per tonne-km and the customer service cost is tipped in rail freight’s favour. In practice, this means providing infrastructure with a suitable axleload to carry a particular commodity, including sidings designed to optimise train length, and effective management of line closures for overnight maintenance to minimise disruption to freight services.

“I don’t want to hold NR to account for the decline of the coal industry, but I do hold them to account for making it economically possible to optimally move a new commodity by rail by taking care of the bits under their control,” Reeve says.

In the past, Reeve says there were few incentives for NR staff to support rail freight growth. While they were obliged in terms of licensing, money generated from heavy freight trains operating on a particular line section was unlikely to come back directly to the team managing and maintaining that asset. This often left route directors in the position where supporting freight could potentially create a performance risk for a passenger train.

However, following the publication of the strategy, Reeve reports that this attitude has changed. NR is now actively engaging with the sector, and Reeve says he is far more impressed by the infrastructure manager’s response than he ever thought he would be. “Good people suddenly feel the burden has been lifted from their shoulders,” Reed says.

It is still early days, but recent success stories include assisting Tarmac’s cement plant at Oxwellmains near Dunbar on the East Coast Main Line to access new paths, enabling the company to target new markets which would not have been possible without rail freight. Stobart Rail is also operating a daily container train from the Mossend rail freight terminal near Glasgow to Inverness for supermarket Tesco.

“The customers who were frustrated about engagement are singing the rail industry’s praises,” Reeve says. “That is unlocking potential and we are now having problems with capacity, which is the obstacle on the network.”

Work is also well underway on plans for the future. Transport Scotland’s High Level Output Specification (HLOS) for Control Period 6, NR’s latest five-year funding period which began on April 1, set out targets for rail freight growth, proposals to improve average speeds, and to deliver gauge clearance works throughout the network in Scotland. The Office of Rail and Road’s (ORR) Final Determination endorsed HLOS and set a target of 7.5% overall rail freight growth in Scotland in CP6 of which 7.5% must be generated from new business by the end of the five-year period. If this growth target was purely measured on the number of trains, it would equate to adding three services to the 45 daily freight trains which currently operate in Scotland.

In addition, the cross-industry Rail Freight Growth strategy attempts to understand what changes are necessary to unlock and deliver this growth. The strategy is signed by the major freight carriers and customers as well as the Rail Freight Group and is approved by NR, Transport Scotland and ORR. It touches on three themes from HLOS relating to rail freight - growth, average speed improvement and performance - and identifies four key factors to deliver this: encouraging customer confidence; developing growth; offering simpler solutions; and doing things differently.

Overall, the strategy’s sponsors commit to work in partnership to transfer at least 1700 lorry movements a year to rail from Scotland’s road network. Specifically, they are targeting growth in the food and drink, forest products and construction materials sector with NR supporting this objective. “I am utterly certain that the growth targets we have put in will be bust by NR in the early stages of CP6 just by the stuff they have underway at the minute,” Reeve says.

Yet there are still obstacles to achieve this target and achieve further growth.

In particular, the complexity of working with the rail industry for businesses is often a major drawback of using freight over road. In 2020, Highland Spring is set to open a rail freight terminal serving its bottled water plant at Blackford, between Stirling and Perth. While Highland Spring has been praising the response of NR, Mr David Spaven, Scottish representative for RFG, points out that it is actually 15 years since that idea was first mooted.

“At the recent Scotland Freight Joint board meeting there was acknowledgement that we need to look at schemes that were delivered in the past and those that failed, to learn the lessons of what we did right and what we did wrong,” Spaven says. “There is no question that over the past 15-20 years there have been some missed opportunities through lack of appropriate championing by key parts of industry towards potential rail customers who have eventually lost interest because it is a difficult industry to work with. In contrast they get a fairly good service from road hauliers.”

Of course, many of these questions come down to investment. There is a limited pot of money available and rail is in a fight with road and its powerful lobby to secure the investment it needs.

Spaven says rail investment has been modest compared with road building in Scotland in recent years, which could further harm the case for rail freight in the future. In particular the planned dualing of the A9 highway from Perth to Inverness and the A96 between Inverness and Aberdeen could present a situation where freight shifts from rail to road.

Spaven says the Stobart Tesco train is limited to 20 containers because of the length of passing loops on the single-track Highland Main Line even though the locomotive can haul a 28-container train. “The railway could be 40% more productive and unless we see that infrastructure improvement, we will continue to have one hand tied behind our back,” he says.
Investment

Spaven says investments should focus both on improving routes and terminals and highlights several possible projects.

For example, longer or dynamic passing loops on the East Coast and West Coast main lines would serve to boost Anglo-Scottish rail freight flows, which are fundamental to the Scottish economy. Similarly, gauge and capacity improvements on the Glasgow and Southwestern route through Kilmarnock and Dumfries would also enable this line to act as a diversionary route for East and West Coast Main Line traffic, providing extra capacity. Electrifying the South Suburban Line through Edinburgh, bypassing Waverley station, would facilitate electric operation from the Central Belt to eastern England while structural gauge emhancements on the Highland Main Line would enable supermarket hauliers to break into the refrigerated and frozen food market. In addition, capacity and capability upgrades to the West Highland Line could enable Britain’s last aluminium smelter at Fort William to ship out product using rail rather than only receiving bulk alumina by rail.

For terminals, while rail currently supports the movement of whiskey from central Scotland to deep sea ports and the Channel Tunnel, Spaven says new terminals in Moray at Elgin and Keith could support the 1.5 million tonnes of bulk whiskey that road carries every year from northern Scotland to maturation plants in the Central Belt. Providing a rail connection to the largest bonded warehouse site in Europe, which is located on the Stirling - Alloa line is another logical project. Dundee is also one of the largest cities in Britain without a rail freight terminal and a logical expansion target.

The timber industry may show the way to go. No timber is currently carried by rail in Scotland. However, a Scottish government working group led by Mr Fergus Ewing MSP, cabinet secretary for rural economy, is looking at the wider implications of investment in this area and plans to suggest suitable investments. This could potentially benefit proposals to start operation from Rannoch on the West Highland Line, while Norbrod is reportedly exploring loadings from its factory close to the Inverness - Aberdeen line.

Rail freight terminal projects in Scotland can also access Freight Facilities grants, which could support up to 75% of the capital cost of a new terminal - and is a programme which benefitted Highland Spring. Spaven says RFG is also encouraging the government to provide start-up support for new services. He says the 2015 Lifting the Spirit, an experimental train to transport food and drink products from Elgin to Grangemouth, which was supported by European funding, shows how this might work.

“There is a lot of risk associated with setting up a train and running it on a regular basis because in the early days not every potential customer is going to commit,” Spaven says. “We are suggesting to the Scottish government that they should pump-prime for nine months or a year so the service can establish itself and bring others that might be sceptical to begin with onboard. After that period of time it has to wash its face commercially. I think that could help on particular corridors.”

Reeve is open to using grant funding to support start-up schemes or those which overcome a capital obstacle. However, he is not interested in subsidising rail freight, preferring to create the conditions for competitive services. “I would rather invest in the capability and the attitude of the rail industry to make rail freight the natural choice rather than subsidise something,” he says.

With all parties seemingly onside and sharing collective goals for the future, there is a spring in the Scottish rail freight sector’s step. The challenge now is to turn the talking and goodwill into action that will finally unlock the potential of the rail industry to support Scottish industry, commerce and logistics.

“As always with these things, the proof is in the pudding,” Spaven says.