Fleet maintenance at the heart of Stadler’s strategy for Britain

Stadler is at an advanced stage of preparation for the introduction of three new fleets in Britain. 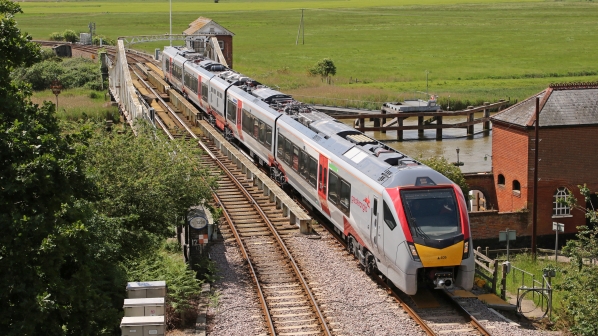 Stadler is supplying 58 Flirt UK trains to Greater Anglia. The first sets are due to enter service in the next few months. Photo: Keith Fender
Photo Credit: Keith Fender

JUNE marked a milestone for Stadler Rail UK with the authorisation of the supplier’s first main line passenger train for the British market. Stadler was awarded a contract in 2016 to supply 58 Flirt UK trains to Abellio Greater Anglia as part of the renewal of its fleet.

Until 2016, Stadler’s presence in Britain had been limited to 12 Variobahn LRVs for the Croydon Tramlink network in London. However, everything changed that year, with an order for 17 four-car trains for the unique Glasgow Subway network, the Greater Anglia order, and the acquisition of Vossloh Rail Vehicles, which added the UKLight diesel locomotive and Euro Light electro diesel to the Swiss firm’s portfolio.

In February 2017 Stadler secured a contract to maintain 52 suburban EMUs for Liverpool’s Merseyrail network. This was followed in June 2018 by an order from Transport for Wales for 36 CityLink tram-trains and 35 Flirts, including 24 tri-mode (diesel/electric/battery) and 11 electro-diesel trains, for use on the South Wales Metro network around Cardiff.

Stadler is at an advanced stage of preparation for the introduction of three new fleets in Britain. The first Glasgow Subway train was delivered in May and testing will take place on a new 760m test track at the line’s Broomloan depot.

Driver training is underway on the Greater Anglia Flirt fleet and the first trains will enter service in the next few months. Abellio maintenance staff have transferred to Stadler and systems technicians have been undergoing training at Stadler facilities across Europe. Stadler will employ 71 maintenance staff at Crown Point depot in Norwich.

In Liverpool, construction of the new depot at Kirkdale is nearing completion and staff have begun to move into the office building.

The 35-year maintenance contract for Merseyrail’s new class 777 trains is the longest ever awarded to Stadler, which will take over 150 Merseyrail staff to maintain the new fleet. Stadler is also supporting Merseyrail with maintenance of 59 class 507/508 EMUs, which date from 1978-1980.

“This is the first time for Stadler that the maintenance contract was worth more than the trains,” explains Mr Ralf Warwel, marketing and sales director for Stadler Rail UK. “The combination of new rolling stock and the responsibility for servicing pushes you towards an optimised train concept that allows easy maintenance. This is really about maintenance-centred engineering and the depot is one of the tools in this sense. Everything has been designed to optimise throughput time. This is one of the benefits of being allowed to maintain the trains.”

The first new train for Merseyrail will arrive in Britain at the end of the summer. “These are unique trains tailor-made for Merseyrail,” Warwel says. “Platforms will be adapted to trains for stepless boarding and there will be a retractable step on the train so it’s going to be a completely different experience for the passenger.”

“A pillar of our strategy is growth of the service business, where the experience you gain can be fed back to optimising rolling stock design for maintenance,” Warwel says. “In the franchise system the operator tends to pass on responsibility for servicing to the manufacturer because that’s the natural home for the maintenance - we know our train best so we can maintain the quality and the residual value of the train for the long-term. Also, the owners of trains nowadays are not just the rolling stock leasing companies we knew from the past but also new players. They don’t have big technical teams to support maintenance, so they are very happy to have the manufacturer take on this responsibility. They are interested in a lower total cost of ownership and that’s a big benefit of providing the total package.”

Warwel believes Britain could be a prime market for alternative traction technologies. Much of the network is still diesel-operated and while the government has set a target of phasing out diesel-only trains by 2040, the political appetite for electrification has diminished in the wake of delays and cost overruns on recent projects.

“Diesel is not the flavour of the month anymore,” he says. “Battery and hydrogen and other technologies could feasibly replace diesel. We have EU Stage V and Stage VI emissions regulations coming up and exhaust aftertreatments, but it’s high time for the industry to look at how it can change in terms of traction.”

Warwel also sees the potential for tram-trains in Britain. Stadler supplied CityLink vehicles for a pilot in Sheffield, which suffered a difficult and protracted birth due to infrastructure issues. “All eyes are on Sheffield to see how effective tram-trains could be for various areas of the country and I believe that if you have a city service and sparsely-used main line tracks then it’s an obvious goal to run tram trains,” he says. “Whether these are dual-voltage electric or diesel-electric, it’s a good option to enlarge the network and improve access to public transport.”