Yuri Saakyan, director general of Russia’s Institute for Natural Monopolies Research (IPEM), explains the impact of the coronavirus pandemic on the performance of Russian Railways in 2020 and the outlook for 2021. 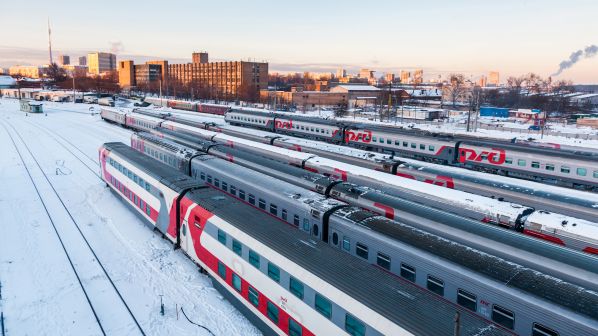 THE 2020 results for rail transport in Russia, as well as the entire economy, were largely dictated by the impact of the Covid-19 pandemic and the counter measures by both the Russian government and international partners. If the force majeure did not directly cause an economic recession, at the very least it aggravated existing negative trends. However, in some exceptional cases, the pandemic contributed to short-term increases in freight traffic, for example in the transport of ore.

RZD’s long-distance passenger subsidiary, Federal Passenger Company (FPK), saw a 6.2% reduction in revenue from core activities and a net loss of Roubles 34.8bn compared with a net profit of Roubles 8.5bn in 2019.

After several years of steady growth in rail freight, traffic began to decline at the end of 2019 and RZD ended the year with 1.278 billion tonnes, a 0.9% reduction on 2018. The decline continued in 2020 and was accelerated by Covid-19 resulting in a 7% drop in tonnage to 1243.6 billion. This negative trend was seen in every month apart from October when traffic symbolically increased by 0.3% compared with 2019. Nevertheless, the gap with last year is narrowing, with falls of less than 0.7% between August and December 2020.

Not all industries in Russia have been impacted by the pandemic. Grain traffic increased by 28.7%, construction aggregates rose by 6.1%, and the transport of chemicals and mineral fertilizers grew by 3.7%.

Ore saw a significant increase in export traffic, facilitated by a fall in supply due to the closure of mines as part of quarantine measures. China is the main driver of the growth, because the authorities have introduced several measures to restore metallurgical production after the first wave of coronavirus.

A significant increase in traffic was recorded in grain traffic. In October 2020 another record was set for grain production which reached 3.2 million tonnes, 37% higher than in October 2019. A steady increase in the price of grain is stimulating exports. In the port of Novorossiysk, the price of wheat increased by 25.6% in September 2020 compared with the same month in 2019.

Container traffic, which has seen remarkable growth over the past few years, increased by 15.9% to 5.8 million TEUs by the end of 2020.
Coal used to be the main driver of rail freight growth in Russia and accounts for about 28% of total rail freight. In the domestic market, a decline in business activity due to Covid-19 and a reduction in electricity consumption led to a drop in demand. In export markets, coal is affected by low world prices, which have been declining since the second half of 2019, exacerbated by lockdowns resulting in a 5% reduction in traffic in 2020.

Oil, which accounts for nearly 17% of rail freight, has also been in decline in the last few years due to competition from other modes. However, in 2020, oil traffic fell by 10% due to a reduction in the production of the main hydrocarbon products.

RZD has adjusted its rail freight growth forecasts for 2021 several times. According to the latest forecast, freight growth may reach 2.8% this year, which will generally match the level of 2019. However, taking the second wave of Covid-19 into account, the forecast may have to be adjusted again.

Passenger traffic has been steadily increasing in the past few years. In 2019, it rose by 3.4% to 1.2 billion passengers. Growth was achieved in both long-distance (5.6%) and commuter (3.2%) services.

The growth in passenger traffic can be attributed to the active development of the network and the introduction of new trains, which helped RZD to compete successfully with other transport modes. Regarding commuter traffic, the development of the Moscow hub has played a significant role: first, with the launch of the Moscow Central Circle, followed by the Moscow Central Diameters under a service development plan up to 2025. According to this, FPK will expand its route network and purchase new coaches that are superior to previous vehicles.

On March 28 2020, the Russian government approved a set of measures to combat the spread of coronavirus, including non-working weeks, which implied shutting down of a number of businesses and the introduction of restrictions to free movement. In March-April 2020, 13% of routes or 500 trains in 48 regions were cut.

Since June 2020, the quarantine measures have gradually wound down, which has had a positive impact on passenger traffic - although it has not recovered to 2019 levels, the rate of decline is steadily decreasing.

The recovery of passenger traffic will depend on the ability of governments and health care systems to overcome the pandemic in a short period of time.

Currently it is difficult to predict a recovery in passenger traffic due to the uncertainty regarding the spread of the infection both in Russia and worldwide. If no new restrictions are introduced, a recovery can be expected in 2021. However, the 2019 indicators are unlikely to be achieved.

It should be noted that people’s travel patterns have changed: daily trips to the office have been replaced by remote working, and for people travelling short distances preference in the near future will most likely be given to road transport.

In 2020, the production of freight wagons in Russia decreased by 27.8% to 57,500 units, which is less than in 2019. The fall in production is largely unrelated to the pandemic. Overproduction in previous years led to an oversupply and a drop in operator revenues, exacerbated by declining traffic in 2020. The cost of providing a gondola wagon averaged Roubles 2275 per day in 2019, dropping to Roubles 1100 per day in 2020, which is why wagon owners do not have the resources to renew their fleets.

According to IPEM estimates, the demand for freight wagons will not recover until 2023. Until then, production will be 45,000-55,000 wagons per year.

In contrast, the purchase of mainline locomotives is almost entirely dependent on RZD which ensures greater uniformity of demand. However, RZD has scaled back purchases due to the impact of Covid-19. In spring 2020, RZD was planning to purchase 640 locomotives, but only acquired 566 units worth Roubles 95bn.

One of the key railway events of 2020 was the commissioning of the 9.3MW three-section 3TE25K2M diesel locomotive in eastern Russia. The new diesel locomotive made it possible to increase the weight of freight trains from 5600 to 7100 tonnes, which will have a positive impact on overall railway capacity when dispatching goods for export to Far East ports.

FPK concluded a long-term contract with Transmashholding’s Tver Carriage Works in 2019 for the development, design, manufacture, testing and certification of up to 3736 passenger coaches up to 2025.

By the end of 2020, FPK had acquired about 600 long-distance passenger coaches, similar to the number ordered in 2019. The suburban passenger fleet is also being updated. In 2020, RZD invested Roubles 28bn to purchase 346 coaches, while 956 EMUs cars were repaired at a cost of Roubles 5bn.

The demand for rolling stock in 2021 will largely depend on the financial condition of the main industrial consumers as well as the development of the pandemic.

In September 2020, RZD presented a concept to finance sustainable projects. The concept is designed to demonstrate compliance with the 2018 Green Bond Principles and Climate Bonds standards. Table 1 shows the placement of Green Bonds by RZD.

According to the long-term development plan up to 2025, RZD has the following environmental goals:

One of RZD’s ecological goals is to increase use of alternative fuels, in particular the development of battery, hydrogen and gas-powered locomotives. RZD plans to replace up to 25% of the diesel fuel consumed with natural gas by 2030.

Hydrogen traction is another promising area, in particular for multiple units, and the first train is planned to be launched on Sakhalin Island. RZD, Transmashholding, Rusnano and the Sakhalin regional government are working on the project and plan to introduce seven trains by 2023 rising to 13 by 2030. It is expected that the new trains will be more expensive to purchase, but cheaper to maintain than diesel units. Technical developments are also expected to reduce the cost of batteries and increase their efficiency in the future, improving the viability of this technology for rolling stock. RZD, Transmashholding and Rusnano are currently designing a battery locomotive.

According to IPEM, rail freight transport lost at least Roubles 166bn in revenue in 2020 due to a drop in traffic and the delivery rates of freight wagons. IPEM estimates the prospects for traffic recovery in 2021 will range from 1.5% to 2.5%, which will not enable freight traffic to return to 2019 volumes. Rental rates for freight wagons will continue to decline, for example, the rate for a gondola wagon will drop by 18-22%. Against this background, the production of freight wagons will decline by 20-22%.

The most unpredictable area in 2021 is passenger transport and production of rolling stock. The recovery of passenger traffic will depend on the ability of governments and health care systems to overcome the pandemic in a short period of time, and investment opportunities will depend primarily on support measures.

From this perspective, in defiance of all expectations, the end of the coronavirus crisis will not bring down the curtain on the economic difficulties of rail transport. Next year, the industry will have to correct past mistakes since the challenges of the crisis have not yet been overcome. The importance of doing so is paramount to the health of the entire Russian economy, which depends largely on the transport sector for its success.