Fuelling the impetus for efficient diesel 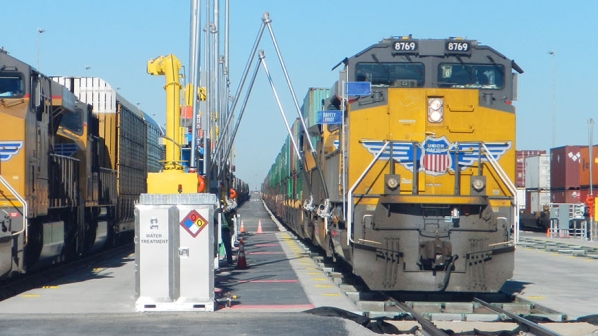 AROUND the world, strides are being made to phase out the use of diesel traction to reduce emissions and improve rail’s environmental effects. But while this continues, work is also continuing to reduce the emissions of the current fleet of diesel trains and locomotives which will still be in operation for decades.

Ecomanda, based in Hünenberg, Switzerland, has developed a fuel additive it says can reduce fuel consumption while maintaining the engine’s power output.

The X-Fuel Energizer additive was developed by Ecomanda founder and CEO, Mr Wolfgang Foerg, who also launched Water Vision, a company created to develop solutions to provide drinking water in places hit by drought. Foerg is no stranger to taking a different approach in finding a solution to large problems, and in April 2018 was involved in investigating the viability of towing an iceberg from Antarctica to combat South Africa’s water shortage.

The X-Fuel Energizer’s chemical solution, which was patented on January 13 2016, is a mixture of gasoline, propane-2-ol, alcohol and lineseed oil, which is then charged with a terahertz frequency.

“(The chemical solution) doesn’t change the calorific value of the fuel, it doesn’t directly change the particles,” Ecomanda business director, Mr Henrique Braun, explains. “It is basically just a carrier of this frequency, which we call hypersonic technology.”

Following the addition of the additive, fuels also continue to comply with EU standard regulations for diesel (EN 590), gasoline (EN 228), heavy fuel oil (RMG 380) and marine diesel (DMA), with an SGS report confirming the additive does not change the fuel’s properties.

Instead, the additive is activated during combustion, at the moment of ignition inside the cylinder. When diluted into fuel at a ratio of 1:10,000, the ultrasonically charged molecules aggregate to, and partition, agglomerated fuel molecules into smaller particles.

“Once you add the additive with the hypersonic technology, there is an aggregation of the physical part of the fuel molecule,” Braun says. This physical effect is what breaks down the fuel particles into smaller parts that during combustion results in less unburnt particles.”

The effects vary depending on a range of conditions including fuel grade, type of engine, and engine load, Braun says, which explains the range of differences in the test results. However, the effect is strongest when used with lower fuel grades.

The X-Fuel Energizer can be applied manually straight into the fuel tank before refuelling, while Ecomanda also supplies a dosing system designed to add the correct quantity to light and heavy fuels. This system allows continuous additive dosing into the fuel flow line, controlling the ratio and providing a reading of fuel flow, additive flow, density and temperature as well as graphs for flows, pressure, density, temperature and more.

Braun acknowledges that “hypersonic” is not the best way to describe the fuel, but as there is nothing similar on the market there is currently no other name for it. The additive has a shelf life of three years, after which it loses the hypersonic effect.

Ecomanda says the additive could benefit a wide range of industries, including shipping, transport and mining, and the company has been conducting a range of tests to assess what the effects are for the various industry-specific uses.

For example, tests on a towage vessel from Tschudi Ship Management and on a Caterpillar engine using PonPower’s test bench in association with SGS and the Maritime Research Institute Netherlands, both conducted in 2017, reported a 13.49% decrease in marine diesel consumption, a 31.6% reduction in hydrocarbon emissions and a 17.8% fall in CO2 emissions.

Ecomanda has put in place a number of measures to assure users of its safety and benefits, including SGS certification, a safety data sheet, field and lab tests, and an insurance policy covering up to SFr 10m ($US 10.1m) per engine for up to two incidents per year.

Ecomanda is also an alliance member of the EU-backed initiative Solar Impulse, launched by Mr Bertrand Piccard and Mr André Borschberg who together completed the first solar-powered flight around the world in 2016.

The alliance is assessing the solutions submitted by its members, and with the help of independent technical and financial experts is hoping to identify 1000 solutions to receive the Solar Impulse Efficient Solution label.

Ecomanda has already received one of these labels, reaffirming its status as a strong contender on the additive market. IRJ