The government of Argentina has secured funding from the World Bank and other institutions for a comprehensive upgrade of the Belgrano South commuter route in Buenos Aires. Robert Preston reports. 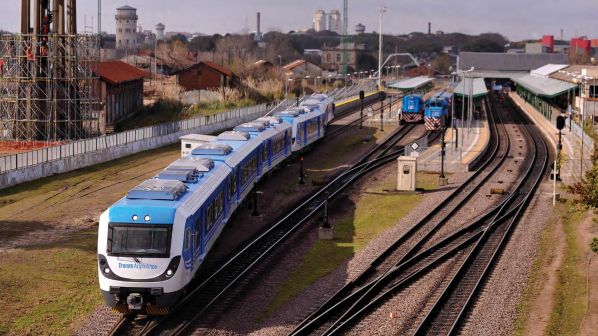 The Belgrano South route is used by 65,000 passengers a day. Photo: Casa Rosada

ON November 4 Argentina’s transport minister, Mr Alexis Guerrera, and minister of the economy, Mr Sergio Massa, signed an agreement with the French Development Agency (AFD) that is lending $US 75m towards a comprehensive upgrade of the Belgrano South commuter route in Buenos Aires that will include electrification and track-doubling. Guerrera said that the agreement marked “financial close on a project that is very important for us and for the modernisation of the Belgrano South route, which is perhaps the most neglected railway and serves an area of the Buenos Aires conurbation in need of better rail transport.”

France’s ambassador to Argentina, Ms Claudia Scherer-Effosse, said that the support for the Belgrano South upgrade was being provided in line with her country’s foreign policy objective of “supporting our partners in ecological transition and sustainable mobility.”

The Belgrano South route is used by 65,000 passengers a day and has the potential to serve 2 million residents living along the line in the southwestern suburbs of Buenos Aires. However, according to Guerrera, the suburban operation is currently in such poor condition that many potential users prefer to use the nearby Sarmiento route instead, pushing it to the limit of its capacity.

Working with AFD, the World Bank and other international financial institutions, the government is looking to turn the Belgrano South route into a modern, efficient, safe and accessible commuter service through a comprehensive upgrade programme. The programme is being undertaken by government agency Argentinian Trains Infrastructure and includes the construction of a new viaduct to connect the route with Plaza Constitución, the main railway terminus for the Roca commuter network of 1676mm-gauge lines running into Buenos Aires from the south.

The 1000mm-gauge Belgrano South line currently terminates at Dr Antonio Sáenz on the edge of the city centre and runs to Tapiales where it divides into two branches, one running to González Catán and the other to Marineros del Crucero General Belgrano. The new 4.2km viaduct between Sáenz and Constitución is 40% complete and is costing a total of $US 122m. Funding is being provided by the Ministry of Transport as well as a loan of up to $US 55m from the Development Bank of Latin America (CAF), and $US 35m from the Plata Basin Financial Development Fund (Fonplata), a development bank formed by Argentina, Bolivia, Brazil, Paraguay and Uruguay.

The Belgrano South network is currently equipped with GRS electromechanical signalling between Sáenz and Tapiales, while modified mechanical signalling is in use between Tapiales and González Catán. These legacy systems will be completely replaced by signalling compatible with electrification, featuring electronic interlockings, LED signals and electric point machines, with centralised traffic control from Tapiales. This will be supported by a fibre optic communications network based on 48-strand cabling that will be available for other uses.

The Argentinian government is also meeting the cost of a station refurbishment programme throughout the Belgrano South network, covering a total of 14 stations. As well as station security and accessibility improvements, this programme includes work to lengthen platforms, install ticket gates and provide bicycle parking facilities. New public spaces are to be created around stations, as well as park and ride sites.

Combining the $US 75m from AFD with the $US 600m provided by the World Bank, the new funding for the Belgrano South upgrade will be allocated to track renewals on the second branch of the route, with the 16km of double track running from Tapiales to González Catán to be re-laid with long welded rail attached with elastic fastenings to concrete sleepers.

The loan agreement with the World Bank was signed on October 28 and, as Massa points out, has been made possible by Argentina reaching agreement with the Paris Club group of lenders to restructure the $US 1.97bn it owes, extending repayment until 2028 and normalising relations with European funding providers.

The Belgrano South agreement follows a $US 347m loan approved by the World Bank in 2021 to fund upgrades and electrification on the 1676mm-gauge Mitre commuter network, running from Retiro station to suburbs in northwest greater Buenos Aires. The Mitre network comprises three routes electrified at 830V dc third rail, from Retiro to Tigre, José León Suárez and Bartolomé Mitre. There are also diesel services from Villa Ballester on the José León Suárez line to Zárate, and from Victoria on the Tigre line to Capilla del Señor. In 2019 the Mitre route carried 160,000 passengers a day.

On the Mitre network, the World Bank is funding extension of third rail electrification by 16.5km from José León Suárez to Benavídez, and by 12.4km from Victoria to El Talar, following track and signalling upgrades. Electrification is expected to take 720 days to complete.

The two lines that are diesel operated cross at Bancalari, where a new, elevated interchange station will be built with a park and ride facility. Another new station will be built just outside Retiro at Facultad de Derecho, served by the Mitre and Belgrano North commuter lines. This will also provide interchange with Line H of the Buenos Aires metro network and will serve the law faculty of the University of Buenos Aires. Argentinian Trains Infrastructure expects the construction of the new stations to take 450 days to complete.

A total of 16 existing stations will be refurbished, including the Retiro terminus, and will receive the same improved facilities and accessibility and security enhancements as the Belgrano South network, including brighter and more energy-efficient LED lighting. Selected stations will also provide internet access to those without a computer. The expected timescale for completing this work ranges from 180 to 480 days, depending on the size of the station project.

To improve service reliability on the Tigre route, the traction power supply system will be upgraded over a period of 720 days. New substations are to be built at Belgrano and Vicente López. The substation at Martínez will be upgraded, and the cabling of the 2.2kV interconnector network will be renewed. The rectifier substations at San Isidro, Núñez, Palermo, San Fernando, Olivos and Victoria will receive new 20kV interrupters, rectifier groups and traction banks.

Renewals of 38km of track including turnouts will take place on the Tigre line. Pedestrian and vehicle level crossings will also be upgraded and drainage improved under this programme, which is expected to take 870 days to complete. The track layout at Retiro will also be remodelled with the aim of improving operational flexibility and reducing delays on leaving and entering the station. The work will include the provision for a future connection with the adjacent San Martín commuter line. Served by the Belgrano North, Mitre and San Martín lines, Retiro is the second-busiest station in Argentina after Constitución, and is used by 44 million passengers a year, according to Argentinian Trains Infrastructure.

Electrifying the two networks and reducing the use of diesel traction will help Argentina reach its carbon reduction targets under the Paris Climate Agreement, while improving rail infrastructure “will make it more resilient to natural hazards like increased rainfall, flooding and heatwaves,” says Ms Liljana Sekerinska a senior transport specialist at the World Bank who is co-leading both the Mitre and Belgrano South projects.

“Climate action is at the heart of our railway programmes,” Sekerinska says. “Frequent and reliable rail services will give mass transit a competitive edge over private cars.”

As well as improved and greener public transport, the upgrades funded by the World Bank are primarily designed to meet the needs of passengers. In what the World Bank says is “a fresh way to approach transport,” planning for the improvements to the Buenos Aires commuter network began with close analysis of how people move within cities. “This focus on passengers and their needs is a key priority for designing transport systems that promote greater and greener mobility,” the World Bank says.

“Frequent and reliable rail services will give mass transit a competitive edge over private cars.”

In Buenos Aires, 50% of women rely on informal and public transport compared with 37% of men. The World Bank reports that 72% of women said they did not feel safe on public transport, with 58% of men having the same opinion, and says that many of the improvements coming to the Belgrano South and Mitre networks will specifically respond to these concerns, including better lighting, the installation of CCTV and the provision of help points. Following an extensive consultation programme, new ramps and signage at stations will make it possible for passengers with reduced mobility to commute by rail.

The rail upgrades will also improve road safety by replacing level crossings with road underpasses and elevated alignments. On the Belgrano South line new underpasses are to be built at 10 locations between Sáenz and Tapiales, for as the World Bank notes, between 2010 and 2019 there were 40 fatalities on level crossings on the route within the Buenos Aires metropolitan area.

According to the World Bank, the funding it is providing comes at a critical time for the public transport network in Buenos Aires, and that innovative and ambitious projects can help turn the tide. Although Buenos Aires has 800km of suburban railways, insufficient public transport funding and growing urban sprawl have been pushing more and more people away from public transport towards the private car. This trend has been aggravated by Covid-19, as “public transport hasn’t yet recovered from a steep drop in riders during the pandemic,” the World Bank says, while car traffic is back at pre-pandemic levels.

“Since they are more dependent on public transport, this shift hits the poor hardest,” the World Bank says. Fewer passengers means that there is less of an incentive to develop services, impacting on reliability and even making passengers feel less secure. The Belgrano South line serves the three most densely populated municipalities within the Buenos Aires metropolitan area, La Matanza, Morón and Merlo, and some of the Argentinian capital’s most vulnerable low-income districts, according to the World Bank.

“In a major metropolis like Buenos Aires, public transport is an essential part of everyday life,” says World senior infrastructure specialist, Ms Veronica Raffo, co-leader for the two projects. “The railway modernisation programmes that are currently underway will not only improve the experience of commuters but will also contribute to the creation of a safer, greener, and more resilient urban transport system.”