The German state of Lower Saxony is set to pioneer mainline ATO operation in Germany under a project announced in May. Kevin Smith spoke with Jean-Marc Nizet, vice-president for mainline signalling at Alstom, about how the project will play out. 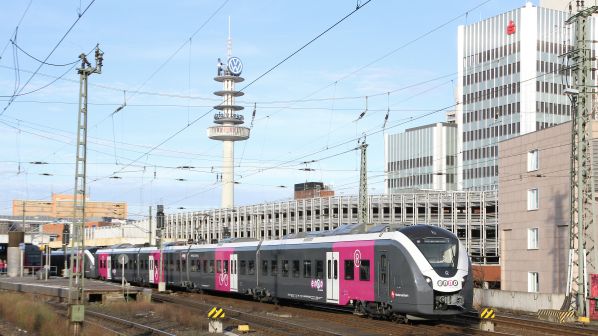 The ATO trials will use two Alstom Coradia Continental EMUs operated by Enno. The aim is to roll out the technology across the fleet of 24 trains. Photo: Keith Fender

AUTOMATING mainline operation promises to unlock additional network capacity and efficiencies and is the next evolution in the deployment of ETCS. Several Automatic Train Operation (ATO) projects are underway in Europe, notably in France and the Netherlands. German Rail (DB) is also actively developing the technology and Germany is on course to be the first country to trial Grade of Automation (GoA) 3 and 4 over ETCS on mainline passenger services.

Alstom announced details of a planned GoA 3 and 4 test project on May 28. Line trials without passengers will commence in 2022 using two Coradia Continental regional trains operated by Metronom’s Enno service on the Braunschweig - Wolfsburg line in Lower Saxony. Alstom is partnering with the operator as well as the Regional Association of Greater Braunschweig, the German Aerospace Centre (DLR), and Technical University of Berlin (TU Berlin) to deliver the project in close consultation with DB Networks.

Alstom’s vice-president for mainline signalling, Mr Jean-Marc Nizet, told IRJ that work is currently proceeding with the partners to define the exact scope, modality and financing of the project, which is expected to be completed by the end of the year. Nizet says the research project will commence in early 2021, and following the evaluation of selected track and equipment required for automatic operation, line testing will start in autumn 2022 and take place for nine months.

The first live trials with passengers will take place in 2023 following an agreement with the operator. The project is set to conclude that year at which point, if successful and the relevant certification is secured from the National Safety Authority, Nizet says the operator has committed to implementing the developed ATO solution on Enno’s fleet of 24 Coradia Continental trains, which are owned by Regionalbahnfahrzeuge Grossraum Braunschweig (RFGB).

“Everything will be settled legally by the end of the year so that afterwards we have two or three years to run the whole project and reach the end point, the end being real-life operation,” Nizet says.

“We will install the technology and our partners will work on the regulatory framework to apply and operate this technology.”

Alstom will lead the technical element of the project with DLR developing the regulatory framework and operational rules study, and TU Berlin supporting the process with further development studies, including on the integration of humans with the system. Nizet says the partnership with DLR is particularly interesting because of the institute’s strong track record of delivering ground-breaking innovation.

“The idea is not just to operate the technology, but to develop a framework to operate ATO in Germany,” Nizet continues. “We will install the technology and our partners will work on the regulatory framework to apply and operate this technology. They will work on the operational rules. They will also work on the human factor, for the driver, the operator and the people who work onboard the train because this has an operational impact and we need to manage this. Change management is paramount.”

The project envisages the use of GoA 3 for mainline operation, with the driver remaining in the cab purely in a supervisory capacity and ready to intervene in an emergency. GoA 4, which is full automation without a driver present, will be used for shunting, manoeuvres in sidings and when trains return to the depot with a capability to drive the trains remotely if required.

In terms of the technology required, Nizet says the emphasis is on updating the platform used for GoA 2, which he says is already deployed and available.

Under GoA 2, the system drives the train but the driver remains in place to conduct supervisory tasks such as operating doors. Alstom installed its GoA 2 solution on trains using the Betuweroute freight line in the Netherlands in partnership with Dutch infrastructure manager ProRail and Rotterdam Rail Feeding during a trial in 2018. It also worked with Paris Transport Authority (RATP) and Ile-de-France Transport Authority (Stif) to install ATO on M109 EMUs using a core section of Paris RER Line A in 2016-2018. In addition, Alstom is supporting efforts to update the Control Command Signalling (CCS) TSI to include ATO in 2022.

GoA 3 or 4 requires the use of additional detectors to complete tasks previously carried out by the driver to an equal or enhanced level of safety. Nizet says this requires the development of an interoperable machine-to-machine interface between the onboard ETCS system and other onboard systems such as GSM-R antennae and specific sensors including for train speed, as well as new optical or video analysis technology which can respond to potential conflicts at level crossings or obstacles on the track.

“Our real added value is at the system level, so that all the building blocks that I am referring to produce a very efficient and safe system.”

“For this technology we will use what is already available on the market,” Nizet says. “Our real added value is at the system level, so that all the building blocks that I am referring to produce a very efficient and safe system - we are talking of Sil 4 technology and in terms of cyber security. We need to be as consistent as we can in terms of technology and adjust it depending on the specific requirements, whether it is for the operation of freight or passenger trains.”

In addition to its experience with GoA 2 projects and the results of work in Shift2Rail, Alstom will draw on experience from the French National Railways’ (SNCF) Autonomous Train project, where it is partnering on the freight train element, and work with ProRail and Belgian private rail freight operator Lineas. This project commenced in April and is trialling automatic shunting of freight trains using an HLR77 diesel-hydraulic shunting locomotive. Alstom is also leading the European ATO project in Shift2Rail Innovation Programme 2, which seeks to develop and validate a standard ATO system up to GoA 3/4 over ETCS.

Nizet says it is his task to coordinate these efforts to reach an optimised but interoperable solution. Indeed, together each of the projects is likely to have significant ramifications for the future of European mainline ATO. With DB pushing ahead with the deployment of ETCS and wider digitalisation of its network, the Lower Saxony project is considered a major step forward.

“The goal is to align with the overall DB Networks strategy,” Nizet says. “For us it will be the first real life project. We will have 24 trains running every day on regional lines with passengers and the objective for Alstom is to have something fit for purpose for the entire German network.”