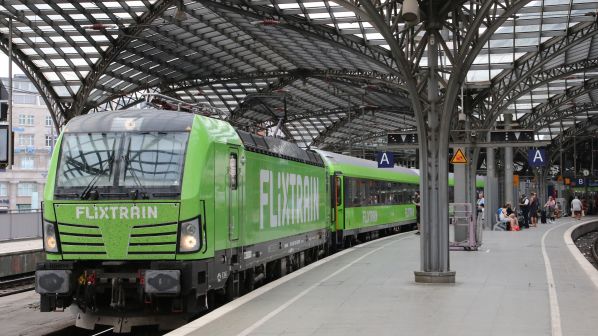 FLIXTRAIN, in common with Europe’s other open-access long-distance train operators, was forced to suspend operations when the coronavirus pandemic struck earlier this year. The company shut down its three-line network in Germany on March 19, but it was not until July that it felt confident enough to start running trains again.

Two routes, Cologne - Berlin and Cologne - Hamburg, restarted on July 23, but at a lower frequency than before. “We were cautious in the beginning, but after a couple of weeks we decided to increase capacity and almost doubled the number of journeys,” Mr Fabian Stenger, FlixTrain’s managing director told IRJ. Stenger says he is “happy with the restart” and that FlixTrain is currently performing above the market average in terms of load factor.

Stenger says adapting to the new normal during Covid-19 has been a tough challenge for all modes of transport in Germany. “There is close contact with the government on how to operate safely and the same measures have been agreed for all carriers in Germany,” Stenger says.

For FlixTrain, these measures include:

Passengers are given the current safety instructions together with their booking confirmation. Train crew also inform passengers of all hygiene measures when boarding.

Stenger says these measures have enabled FlixTrain to maintain capacity on its trains. “Compared with German Rail (DB), we can’t overbook a train because every passenger is assigned a seat so we can carry the same number of passengers as before,” Stenger told IRJ. “It is hard to say what the additional cost is, but it is an investment from our side, and we are happy to start up again.”

German operators have benefited from a positive attitude to the use of public transport, partly due to a much lower incidence of Covid-19 in Germany than in other European countries. Indeed, while most of Europe’s incumbent national rail operators cut back services drastically during national lockdowns, DB continued virtually as normal.

However, FlixMobility, FlixTrain’s parent company, is unhappy with the German government’s planned state-aid package to DB to offset the effects of the coronavirus pandemic which it believes will give DB, which has a 99% share of the long-distance rail market in Germany, an even greater advantage over private operators.

FlixBus founder and CEO, Mr André Schwämmlein, wrote to the European commissioner for competition, Ms Margrethe Vestager, on July 7 calling for measures to balance competition in the German rail market. Schwämmlein is particularly concerned about the €11bn in state aid which DB was promised last autumn as part of Germany’s climate package and an increase in its debt ceiling from €25bn to €30bn.

German operators have benefited from a positive attitude to the use of public transport, partly due to a much lower incidence of Covid-19 in Germany.

“DB seems to be incessantly using crisis situations to strengthen its competitive advantage,” Schwämmlein says. “Such a pattern could set a dangerous precedent in the EU, turning back the clock on decades-long efforts and preventing other private rail services to launch competitive offers across Europe in the foreseeable future.”

In order to maintain fair competition in the German rail market, FlixMobility would like to see non-discriminatory access to DB’s distribution channels such as the DB Navigator app and website.

“Consumers are still being misled, thinking this is a comprehensive overview of journeys, but there is not always full transparency and consumers are not able to buy FlixTrain tickets directly via bahn.de,” Stenger says. FlixMobility also wants a reduction in train access charges for commercial operators, fair access to train paths, maintenance and train stabling facilities, and a ban on aggressive price dumping by DB.

“It is a tough time for everyone, and we are not against some kind of state aid for the incumbent,” Stenger told IRJ. “DB received huge financial support last year, and with Covid-19 another package is coming to the table. We are talking about billions of euros, but there is no transparency on how DB will use the money.

“State aid should not endanger fair competition. There is far more competition in air transport than rail, but the German government placed a lot more conditions on Lufthansa than it has on DB. We are a private company and we had to cease our operation whereas DB continued with virtually the same capacity, so it is somewhat unfair when the incumbent gets government support and we do not.

“There are anti-trust authorities we can appeal to in Germany, but in the end it is a political decision. We want to maintain fair competition in the German train market. We are talking to a lot of German politicians, but DB is a state-owned company.”

While FlixTrain ramped up services on its two reopened routes in Germany in August, Stenger says the company is planning to reopen the third route linking Berlin with Stuttgart, but it does not have a set timing on when to do so. “It’s a tricky question - I don’t have a crystal ball,” he says. “We are more on the conservative side at the moment and looking at how to proceed for 2021.” Nevertheless, Stenger says FlixTrain is “looking for expansion in 2021.”

FlixTrain’s growth has been rapid since it entered the German long-distance rail market in March 2018 when it took over the operation of the former Hamburg-Cologne Express (HKX) service linking the two cities. The following month, the company launched its second route linking Berlin to Stuttgart with Leo Express, Czech Republic, as the operator. This revived the short-lived crowd-funded Locomore service between the two cities.

FlixTrain added a second round trip on the Berlin - Stuttgart route and stepped up the frequency from five times per week to daily in June 2018. The following month, the Cologne - Hamburg service was expanded to two round trips a day.

“We were very happy with the numbers which were exceeding our expectations.”

A third route, linking Berlin with Cologne and running six days per week, was launched in May 2019. FlixTrain added seven new destinations to its nationwide long-distance rail network with the start of the new timetable on December 15 2019, and the journey time for Hamburg - Cologne services was cut from a minimum of 4h 8min to just over 3h 30min.

FlixTrain planned to launch a new Hamburg - Stuttgart service this spring with up to three departures per day by the summer. However, expansion plans came to an abrupt halt with the spread of coronavirus forcing the company to suspend all services on March 19.

Up to that point, Stenger says traffic was building up well. “We carried more than 1 million passengers during our first year of operation,” he says. “We were very happy with the numbers which were exceeding our expectations. We are the first private long-distance passenger rail network in Germany competing with DB. We are aware that it is an up-hill task and a long-term investment.”

Last year, the company decided to upgrade its rolling stock. FlixTrain’s financial partner, Railpool, acquired used compartment coaches which are being converted to high-capacity vehicles by Talbot Services in Aachen. Talbot will also maintain the vehicles under Railpool’s 15-year lease agreement with FlixTrain.

The work involves more than 100 coaches and includes removing the traditional compartments and converting the coaches to open-plan saloons, fitting new seats and modernising the toilets. Power sockets and Wi-Fi have been installed as well as an onboard entertainment system. The refurbishment should extend the life of the coaches by 15-20 years.

Train services are only being resumed using the refurbished coaches. “We have refurbished more coaches than we currently have in service,” Stenger says. “We are always looking at options to add more coaches to the fleet, but the number of second-hand vehicles is limited, so we have also been looking at new vehicles.” The company had initial talks with a number of train manufacturers last year.

The restoration of services also coincided with a switch in train operators following the ending of agreements with FlixTrain’s two launch operators, BahnTouristikExpress, in partnership with Railroad Development Corporation (RDC), and Leo Express.

“The current situation is a great challenge for the entire mobility industry, which includes our partner companies,” Stenger explains. “Both FlixTrain and RDC decided to terminate their cooperation. Leo Express has recently made entrepreneurial decisions that have affected their cooperation with FlixTrain and the re-start of operations. Economically, we did not come to an agreement and therefore we had to decide to terminate our cooperation. We regret that Leo Express will not continue to be our partner.”

The two routes are now operated by SVG and IGE. FlixMobility, which also owns FlixBus, has similar partnership agreements with both train and bus operators. “We may need additional partners for specific routes, and we will discuss this over the next couple of months about how we grow and expand next year,” Stenger says.

“Rail is a long-term investment for us, We have slowed down a little, but we still want to expand.”

FlixTrain was planning to become the first open-access long-distance train operator in France with services radiating from Paris to Bordeaux, Toulouse, Lyon, Nice (an overnight train) and across the border to Brussels. However, FlixTrain decided in April not to proceed with plans to enter the French market.

Stenger says one of the obstacles is the “enormous” cost of track access charges in France which reach €30/km for high-speed services. This compares with “the still very high” €10/km in Germany and just €1.50/km in Sweden. “With fees at the current levels, it is very challenging to offer customers an affordable product similar to that which FlixTrain successfully provides in Germany,” the company told IRJ at the time. “If French decision makers can demonstrate a willingness to align with other European markets and conditions improve, FlixTrain is open to reconsidering a French expansion.”

FlixTrain announced plans last September to launch services in Sweden from Stockholm to Gothenburg and Malmö this year. Despite the pandemic, FlixTrain still plans to enter the Swedish rail market due to the “excellent situation for private operators.”

“Rail is a long-term investment for us,” Stenger says. “We have slowed down a little, but we still want to expand. The question is what impact Covid-19 will have on demand in the future. We still expect to open new routes in Germany and to start business in Sweden next year.”