Getting Oaris up to speed 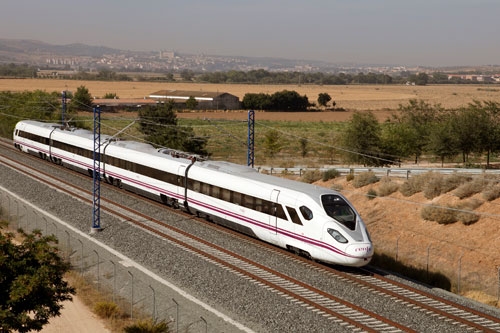 CETEST's test and analysis centre is an independent laboratory which utilises test benches to verify rail vehicles as well as components. Cetest also studies and evaluates the behaviour of rail vehicles on track.

CAF's new high-speed platform, Oaris, is the Spanish manufacturer's flagship project for the next generation of high-speed trains. The first four-car prototype is currently undergoing testing and once verified Oaris will be available in four, six and eight-car configurations.

Cetest has been heavily involved in the verification and testing of Oaris' main components since work began on developing the prototype in 2010. Early tests included a structural examination of the train's bodyshell where two aluminium car bodies (front car and middle car) were tested on a large structure test bench according to the EN 12663 standard for structural integrity.

The tests encompassed not only the carbody frame but also the crash energy management module on the front car. The frames were fitted with over 200 strain gauge channels and a number of displacement sensors in order to validate the Finite Element Analysis (FEA) computer simulations and verify the overall structural integrity in a quasi static manner.

Modal testing was also performed on the front carbody. This test consisted of a multipoint excitation via impact and the measurement of several dozen high-accuracy accelerometers to record the structure's natural frequencies and modes of vibration. CAF subsequently used the information from this test to validate the numerical models which characterise the carbody.

Both motor and non-motor bogie frames were tested according to EN 17349 on one of Cetest's three test benches. These tests comprised initially the quasi static evaluation of resistance to maximum loads and conditions and later the measurement of stresses using strain gauges. Once these were completed, a fatigue (full life time) test of each frame was performed in which each frame was subjected to 10 million combined vertical, longitudinal and lateral loading cycles. Magnetic (MT) as well as visual (VT) non-destructive inspections of the frames were performed during the tests. The speed of the test benches and hydraulic actuation processes meant that these tests were completed promptly enabling CAF to continue the design verification process in a timely manner.

Once the prototype vehicles were assembled and finished they were sent to Cetest at the beginning of 2011 for important key testing. This includes suspension flexibility testing (EN 14363) of Oaris' advanced suspension system. An experimental evaluation and comparison of the behaviour of different suspension solutions designed for maximising comfort levels at very high speeds was carried out before an optimal solution was selected.

We also conducted tests intended to prevent derailments (EN 14363) which are essential before full operational tests and experimental laboratory studies begin that will evaluate the train's safety in case of derailment.

These two tests were undertaken using a proprietary test bench designed by Cetest engineers. This test bench comprises several independent but jointly-controlled actuated platforms designed for mobility and flexibility. It also benefits from being portable which means the bench can be transported to the customer's facilities providing an easy and cost-effective solution.

In autumn 2011 the Oaris prototype was granted access to run on the tracks of Spanish infrastructure manager, Adif. During track testing some key safety and performance parameters were monitored including running behaviour at very high speeds. Most of these high-speed trials take place on Saturday and Sunday nights when tracks are available for testing activities.

Oaris has run at speeds over 350km/h in its normal configuration during these tests. In order to monitor and control ride quality at every instant, accelerometers, gyroscopes, displacement and temperature sensors, and strain gauges were installed in the cars. An online safety assessment was also carried out on the vehicles.

The Oaris prototype is equipped with four instrumented wheelsets. These utilise the latest measurement technologies, wireless communication protocols and advanced analysis algorithms to accurately measure the constant longitudinal, lateral and vertical forces exerted at the wheel-rail interface. All the data retrieved can later be used for post-processing to complete a full homologation according to the EN 14363 standard.

Oaris' pantograph is also being tested to guarantee its capability to operate at speeds of 350km/h and above. This requires precise measurement of forces between the catenary and the pantograph, with test conducted according to EN 50317 and EN 50367.

Upcoming tests on the train include electro magnetic compatibility (EMC) testing according to EN 50121 and all tests relating to aerodynamics of very high speed trains reflected in EN 14067. These include an effective measurement of slipstream, underfloor air flow characterisation, head pressure wave studies and tunnel entry and passage behaviour.

In the next few months operating speeds will be increased further to test Oaris' performance at its maximum design speed. This will be enhanced by the addition of four more cars to the current four-car train.

Cetest will continue to play a key role during these tests as they continue throughout 2012 through the measurement and control of all safety and performance parameters.