Gotthard base tunnel: on track

Laying of the first rails at the northern end of the Gotthard base tunnel started in February this year, while installation of equipment on the southern 15.5km is already complete, paving the way for test running to start this month. Anitra Green reports from Erstfeld, Switzerland. 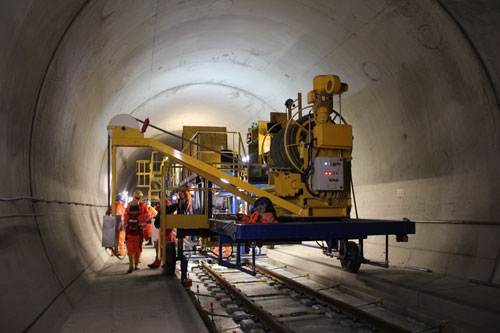 THE breakthrough of both the western and eastern bores of the Gotthard base tunnel was achieved late last year, and now the installation of the railway infrastructure is in full swing. The first 15.5km section between Bodio and Faido (west) is complete, and test running is expected to start this month. Full trials with trains running at speeds up to 230km/h are scheduled to begin next year.

The Transtec Gotthard consortium is installing the railway infrastructure under a contract worth SFr 1.7bn

($US 1.9bn), which covers not only the 57km twin tunnels but also around 11km of connecting ballasted track beyond the north and south portals. Transtec Gotthard has now started work on the northern end on the section as far as Sedrun, beginning with the construction of temporary depots outside the tunnels. This will allow the installation of power supply and telecommunications cables to start.

At the same time, work on the concrete shell of the tunnel at the multi-function stations at Sedrun and Faido is underway and is due to be finished this summer, or at the latest in the autumn. Above ground at Erstfeld, the northern portal of the tunnel, gradual dismantling has started of the huge storage depots and installations for processing the spoil extracted from the tunnel.

"The logistical challenge is enormous, for the only viable access points to the tunnel are the two portals," explains

Mr Renzo Simoni, CEO of AlpTransit Gotthard (ATG), which is in charge of the entire project. ATG is a 100% subsidiary of Swiss Federal Railways (SBB), the future owner and operator of the tunnel. Installation and commissioning is scheduled to take seven years, and Simoni is confident the deadline will be beaten: "The Gotthard base tunnel will be ready for commercial operations at the end of 2016," he says, which is a year earlier than originally scheduled. It will then be the world's longest railway tunnel.

With such a tight schedule, close cooperation is required between the leading partners in Transtec Gotthard. This requires a complex project management structure says Mr Rolf Brunner, chairman of Transtec Gotthard's construction committee: "More than 1000 technical interfaces must be coordinated with each other to make trouble-free operation in the tunnel possible."

Once the temporary communication and power lines are in place, work can begin in earnest on installing cooling systems, conduits, safety systems, and so on. The track is laid in a 20-day cycle covering 2160m, and Transtec Gotthard has developed specialised machinery for this project. First the 60kg/m, 120m-long UIC standard rails are brought in and flash-butt welded. The rails are laid on LVT sleeper blocks with rubber boots and specially-developed elastic pads inside. When the rails are in position, they are calibrated by a laser surveying tool to an accuracy of 0.5mm.

Once this is complete, the concrete can be poured for the slab track. A special 24-wagon concrete train mixes the concrete in the tunnel, feeding it in batches to the 2160m-long sections. Although the process is highly automated up to this point, the final stage needs a human touch: pouring is closely monitored and final smoothing is done by hand.

This is followed by the installation of pre-assembled overhead catenary. Telecommunications equipment (including fixed and mobile systems for data and voice transmission), signalling installations, boosters, transformers and so on are installed in the cross-tunnels which are located at intervals of 325m and connect the main tunnels, which are about 40m apart. Cooling systems are also installed at this stage.

The basic idea is for installation work in the tunnel to be almost entirely automated, so that human intervention can be kept to an absolute minimum. Once the tunnel is in full operation with frequent trains running at high speed, maintenance time will be at a premium, and can only be done at night or weekends.

Any equipment that does not need to be located inside the tunnel is installed outside. This includes the tunnel control centre which is being set up in the regional control centre at Pollegio, near the southern portal. This will monitor all technical, scheduling and operational aspects, covering train control - the tunnel will only have ETCS Level 2 signalling - interlockings, contact lines and traction power supply, ventilation and lighting, repair and construction services, logistics, and police and rescue services.

At the moment everything is running to schedule, but as Brunner points out: "The race is on." Everyone knows there is no time to lose in this enormously complex project. A test laboratory has been set up to simulate every possible aspect of train operation, with virtual trains already racing through the new tunnel. Once the tunnel is in operation, between 220 and 260 trains a day are expected to pass through the Gotthard, with passenger trains travelling at up to 250km/h and freight trains reaching 160km/h. When the 15.4km Ceneri tunnel to the south, also part of the Gotthard base line project, is finished in 2019 journey times between Zürich and Milan will be cut to under 3 hours from the current fastest time of 3h 41min.

Other contractors: EquiTec Gotthard joint venture of Alpiq Infra and Implenia has a SFr 45m contract to fit out Lot E.