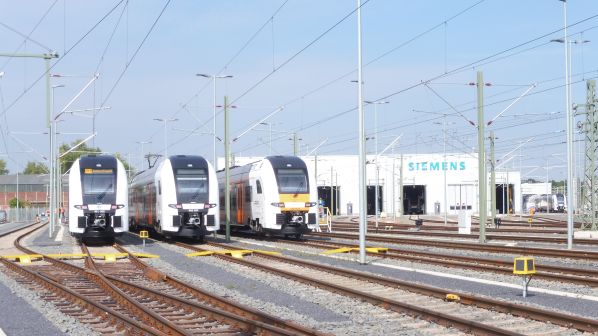 JANUARY 2013 saw the launch of a Europe-wide competitive tender for Rhine-Ruhr-Express (RRX), a new concept in mass transit and the first of its kind in Germany.

Under this concept, particular emphasis was placed on lifecycle costs with clear responsibility for the long-term cost structure. The supplier had to guarantee availability of almost 100% for up to 32 years. Train operators that won operating contracts for specific lines under a separate competitive tendering procedure would assume responsibility for 15 years of operation at fixed costs and remuneration rates. With the entire fleet now in service, this approach is beginning to yield positive results.

The RRX project first came into being in 2006 as an infrastructure and transport initiative of the Federal Ministry of Transport and North Rhine-Westphalia, Germany’s most populous state with 18 million inhabitants. The polycentric conurbation served by the RRX network is home to 7.7 million people living in cities including the regional capital Düsseldorf as well as Duisburg, Essen, Oberhausen, Bochum, Dortmund and Wuppertal. Before the pandemic, 33 municipal transit authorities and seven train operators carried more than 1.1 billion passengers a year and generated annual fare revenue in excess of €1.1bn. The network encompasses Cologne as the region’s largest city with a population of 1.09 million to the south and extends west to Aachen on the border with the Netherlands and Belgium.

The operating concept of six RRX lines was decided in a study of the project in 2006. RRX was designed to relieve the extreme congestion on mainline passenger rail services as well as on the conurbation’s roads. The concept provided for four lines on which trains would run non-stop at 15-minute intervals between Cologne and Dortmund. The two other lines would supplement existing regional and suburban train services on certain sections of the network. In July 2013, North Rhine-Westphalia and five special-purpose associations agreed on the implementation of the transitional operation phase.

Bidders were invited to tender for the manufacture and supply of at least 77 EMUs (plus a maintenance reserve), each with at least 400 seats, including maintenance and assurance of long-term availability over 32 years while minimising life cycle costs (see panel below).

Trains that meet these requirements and with such high passenger capacities had been hitherto unknown in the railway industry. To meet this demand, Siemens developed its Desiro HC (High Capacity) on the basis of its internationally deployed Desiro regional multiple unit. The class 462 EMU is 105.3m-long and consists of two powered, single-deck end cars and two unpowered, double-deck centre cars with a total of 400 seats.

Key factors for consideration, aside from a favourable purchase price, were efficient energy consumption that could be costed over the entire lifecycle as well as optimised servicing and maintenance. To achieve almost 100% availability for up to 32 years, the bidders were able to make their own calculations regarding the number of substitute vehicles required. In making this decision, Siemens was able to draw on its experience with similar concepts in Britain, Spain and Russia, where long-term train maintenance contracts had already been in place for some time. Unlike RRX, however, these contracts were financed by leasing companies and national transit authorities.

Siemens Mobility operates its own depots in these countries, in some cases in cooperation with train operators, meaning it has been able to accumulate experience in the maintenance and repair of both its own and third-party rolling stock. These contracts also feature agreed availabilities of up to 100% and for this reason, the bid submitted by Siemens Mobility included a workshop to be set up exclusively for the maintenance and servicing of the RRX fleet.

In March 2015, Siemens was awarded a contract to supply 82 four-car Desiro HC trains, and opted to construct a depot in Dortmund. Two further trains were added to the order over the course of the project. The depot works on a paperless basis with tried-and-tested software, cutting-edge systems and qualified employees. Smart monitoring, measurement and data analysis facilitate an accurate condition assessment of the trains and components, enabling action recommendations to be made and predictive maintenance to be carried out on the trains. This has helped to streamline and optimise costs of service processes at the depot.

With Siemens assuming responsibility for the condition of the trains over three decades, the condition data transmitted continuously from the trains can be evaluated directly and used for predictive maintenance. Moreover, Siemens Mobility’s data centre in Munich develops algorithms to accurately predict incipient sources of trouble, enabling early maintenance to be set in motion before a fault causes operational problems and delays.

The aim of this predictive maintenance is to ensure train availability of up to 100%. As a result, only five trains need to be kept in reserve, which has had a positive impact on the overall costs of the RRX project for both Siemens and the operators.

The prototype RRX train started test operation at the Siemens Wegberg-Wildenrath test centre in July 2017. The RRX maintenance facility in Dortmund opened in September 2018 and the first 15 vehicles entered service in December 2018 on Line RE 11. Six months later National Express received 23 trains for RRX Line RE 6 from Minden to Cologne. In December 2019, National Express introduced 12 more trains on Line RE 5 from Wesel to Koblenz. In June 2020, Abellio took over Line RE 1 from Aachen to Hamm with 16 trains. Since December 2020, National Express has been running Line RE 4 from Aachen to Dortmund with all 84 RRX trains now in service.

Nevertheless, it will take at least another 10 years before infrastructure manager DB Network has expanded the rail network sufficiently and cleared all the bottlenecks to allow RRX operation.

The new RRX trains have already proven their worth when it comes to improving reliability and timetable adherence as well as significantly reducing train failures.

There was a clear division of work in the RRX project from the outset; the rail transit authorities specify the operating demand and reserve to meet the timetable, while the manufacturer makes the trains available at the specified time and to the specified quality standard at all times without restriction. The number of trains required for maintenance is defined by the manufacturer.

The transit authorities, which previously struggled with poor operating quality and limited options to enforce sanctions, pay a fixed price for 100% system availability as well as for servicing and maintenance, and make vehicles available for up to 15 years to the two current train operators, National Express and Abellio, to provide the transport service ordered.

Siemens Mobility is responsible for supplying approved vehicles and for ensuring their almost 100% availability over 32 years. This is underpinned by a replenishment obligation on the manufacturer to make a further vehicle available to maintain the service. To eliminate disputes, operational and availability tasks are clearly delimited: the train operator performs operational tasks, vehicle scheduling, stabling and interior cleaning, while Siemens is responsible for servicing and maintenance, exterior cleaning and rectification of damage caused by vandalism.

Overall, the RRX project approach is paying off for all stakeholders because the transparent division of tasks for financing and operation reduces lifecycle costs. The prices for the vehicles are lower, and the financing costs for the ordering party are significantly reduced. Savings were made in servicing and maintenance as well as operating costs, the latter resulting in particular from the lower energy costs of the new vehicles. The economic success is greater in all respects than in a conventional competitive tendering procedure, generating benefits not only for the mass transit ordering party and the operators but also for the train manufacturer.

The call for bids set out the following requirements for the EMUs: