The development of a high-speed rail network is at the centre of Turkey's ambitious plan to expand and modernise its national railway, which by 2023, when the country celebrates the centenary of the founding of the Turkish republic, will have been completely transformed, reports David Briginshaw from Ankara. 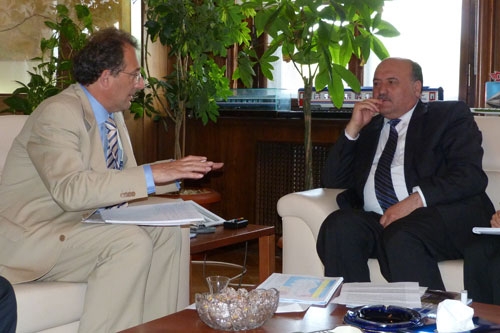 THE director general of Turkish State Railways (TCDD), Mr Süleyman Karaman, clearly enjoys explaining to visitors how the future of TCDD has been secured, because in 2003, the country faced a stark choice: close the railway or invest in it.

The Turkish rail network almost doubled in size to 7900km between 1923 and 1951, but expansion slowed to a trickle in the period up to 2002. Only 945km of new lines were built even though major gaps in the network still needed to be plugged and several important cities, such as Bursa and Antalya, were not even served by rail. The reason for the lack of funding of rail during the second half of the 20th century was clear: the government put all of its land transport energies into developing highways.

Failure to expand let alone modernise the railway soon made rail increasingly uncompetitive with road with the inevitable consequence that TCDD soon plunged into the red, clocking up mounting losses each year.

"In 2003, the government asked us to brief it on the future of TCDD," says Karaman. "We could either continue to make losses, which would make it impossible for us to survive, or we could invest. We looked at other countries like Germany, Spain, Japan and Korea, to see what progress they had made and decided that by investing in the railway, Turkey could gain the status of a developed country, and investing in high speed would be a way to improve our technology and economy, which is vital for Turkey."

TCDD's $US 14.6bn investment between 2004 and 2011 inclusive produced significant results. The first two high-speed lines - from Ankara to Eskisehir and Konya - have been completed, 7344km of track, representing about 80% of the network, has been renewed leaving 2209km still to do, while a new 79km commuter line was put into service in Izmir last year. A start has also been made on renewing the motive power and rolling stock fleets, 394 out of 410 stations have been renovated, and the first of 19 freight logistics centres have opened.

The Ankara - Eskisehir high-speed line opened in March 2009. By May this year it had carried 5.78 million passengers, and rail's market share has increased from 10% to 75%, the extra traffic coming mainly from road.

The Konya line opened for business on August 24 2011 and by May had carried 918,000 passengers. This is a new market for TCDD as the high-speed line plugs an important gap in the rail network.

"We are carrying about 180,000 passengers a day on the two lines, which is what we expected, and we have achieved a 98% satisfaction rate among passengers," says Karaman. "We are now working to try to satisfy the remaining 2%."

Izmir's new Egeray commuter rail line has also been a great success. It opened in March 2011 and by the end of the year had already transported 35 million passengers. Traffic is expected to jump to 50 million journeys this year. To put it into perspective, the rest of the TCDD network will carry 93.5 million passengers.

I asked Karaman whether the completion of these projects has helped to lift TCDD out of the red. "Our financial performance is not as we would wish," he replied. "We are paying out a lot for construction works, and three lines are closed until the end of 2013 for reconstruction, resignalling and electrification."

The decision to close three main lines, including part of the Haydarpasa - Eskisehir line, is unprecedented and reflects the scale of the work being done. Indeed, parts of the network are more akin to a construction site than a railway. For example, only one track is in use on the main line to the west of Ankara for which all commuter, high-speed and freight trains must fight for paths.

This year will see a 30% hike in investment to a record $US 4bn as TCDD ramps up its modernisation and expansion programme. Between 2011 and 2023 TCDD plans to invest $US 47.4bn of which around two-thirds is for high speed.

By the end of 2013, the new tunnel under the Bosphorus in Istanbul will have opened and the Ankara - Eskisehir high-speed line will have been extended to Istanbul, although it will not enter commercial service until 2014. With a journey time of just 3 hours for the 533km trip, this will not only make rail highly competitive with road for the first time but should also threaten air's dominance on Turkey's busiest route.

In addition, the Kars - Tbilisi - Baku railway, of which 40% is now complete, will also open at the end of 2013. Completion of these projects will be potent symbols of the progress being made, while at the same time revolutionising rail transport both for passengers and international freight traffic.

Karaman estimates that the freight market between Asia and Europe is worth around $US 75bn, and TCDD is keen to have a share of this. The train ferry crossing of Lake Van on the main line to Iran is to be upgraded, although the long-term objective is still to build a new line around the lake. Tenders have been invited for two 50-wagon train ferries. The train ferry across the Black Sea will also be improved.

The plan to separate infrastructure from train operations should become law later this year and enter into force in 2014. TCDD will become the infrastructure manager with new organisations being set up to run train services, to regulate the railway, and to investigate accidents. As Karaman put it: "it will be the beginning of some things, and the end of others."

By 2015, the first phase of the high-speed network will be complete with trains running to Bursa, Afyon and Usak en route to Izmir, and east from a new high-speed station in Ankara to Sivas and Erzincan. The cross-Bosphorus Marmaray project in Istanbul will be fully operational, and the 36km Sincan - Ankara - Sayas line will have been quadrupled to separate commuter trains from high-speed services. In addition, the first of several planned conventional lines will have opened and 2800km of the existing network will have been electrified.

About 1900km will have been resignalled, for which some contracts have already been awarded. Invensys Rail and Turkish civil engineering company Fermak won a €76 million contract in January from TCDD to install ERTMS Level 2 on the 310km Bandirma - Menemen line.

Completion of these projects should lead to a surge in revenue allowing TCDD to start to see a return on its investment and a transformation in TCDD's financial performance.

The final expansion phase up to 2023 will see high-speed trains running from both Istanbul and Ankara to Izmir and to cities on the southern Mediterranean coast including Antalya. In the eastern half of the country, the high-speed network will extend to Trabzon on the Black Sea, Kars in the far east, and southeast to Kayseri, Malatya and Diyarbakir. New conventional lines will replace some of the poorest alignments on the existing network and extend TCDD's reach to the Black Sea, from Kars to the Iranian border, and in the southeast of Turkey to fill gaps in the network and provide a second link to Iraq which avoids crossing Syria. Turkey will then have a railway of which it can be truly proud and which will enable to it to fulfil its role as the bridge between Europe, southern Asia and the Middle East.