ATO has the potential to transform regional rail in the Czech Republic, potentially saving some lines from closure. Richard Clinnick meets AZD Praha officials to find out more. 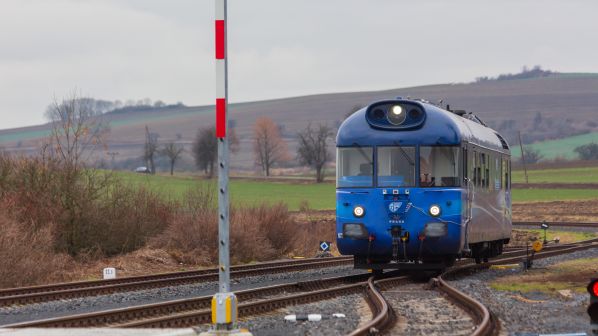 AZD Praha performed a demonstration of GoA 4 operation on the Plum Railway in December. Photo: AZD

THE operation of autonomous passenger trains in the Czech Republic came a step close to reality in December following a public demonstration of a driverless train by AZD Praha on its 38km Plum Railway between Cízkovice and Most.

The Czech signalling developer and supplier bought the railway - given its name due to the fruit trees that once grew beside it - in 2016 to undertake research and development of new technology without interrupting commercial services on the main line.

Those on board the train, and at the lineside, were able to witness the single-car DMU stop at a crossing that had been blocked by a broken car without any intervention from onboard staff.

As the DMU approached the crossing, the lidar laser systems fitted to the train detected the broken car. The train automatically blew its horn, but, because the car did not move, the DMU stopped without any driver intervention. The train did not depart and instead waited for consent from the dispatcher in the centre in Lovosice who was able to check the situation remotely via cameras fitted to the train. Only when consent was issued did the train continue its journey.

AZD has been involved in Shift2Rail’s development of Automatic Train Operation (ATO). ATO at Grade of Automation 2 (GoA 2) was tested in 2020 at three locations in Europe with Shift2Rail partners, and prior to the pandemic there were plans to test ATO at GoA 3 and 4 ahead of a presentation of the project at InnoTrans, which was due to be held in September 2020. This was cancelled due to the outbreak of Covid-19, and these tests finally took place in December.

AZD’s long-term aim is to demonstrate the safety of autonomous operation, which it says can be used on branch lines and regional routes. It says deploying the technology will reduce cancellations on these railways as well as boost the industry’s environmental credentials.

AZD CEO, Mr Zdenek Chrdle, says that the company “definitely does not want to work with a black-and-white vision of replacing drivers, but with a modern vision of operation, where professional staff are still required to carry out a number of key tasks.” Speaking to IRJ on January 17, he suggested that while trains can operate autonomously on-board staff should be able to help passengers board and disembark from trains, be available to sell tickets and provide general assistance. Yet, if required, they could still undertake safety-critical duties.

AZD suggests that this method of operation could also reduce costs and increase efficiency. Chrdle tells IRJ that the railway’s competitive edge in the Czech Republic’s regions is not great, with buses replacing services on some lines. He highlights a situation where buses replaced trains on 12 lines in the Central-Bohemian region before Christmas. He argues that introducing automatic operation would eliminate this scenario.

“Considerable attention is also paid to the issue of ensuring safe interaction of automated railways with road transport,” Chrdle says. This includes using the cooperative ITS systems and the results of the C-Roads project, which allows road vehicles to communicate with each other and infrastructure, including railway infrastructure such as level crossings. The C-Roads project is Europe-wide and seeks to develop an intelligent system that will improve road safety by using data from road vehicles allowing them to communicate with each other and surrounding infrastructure.

Legislation is hindering the transition to a fully automated railway, according to Chrdle. The Czech government wants to introduce ETCS, including on regional lines, but he says not every operator has the resources to introduce the technology on its fleet. “Unless we, or somebody, does something, then the regional lines will be closed,” he suggests.

AZD claims it can solve not only technical challenges but also legislative issues, both at a national level and in cooperation with European partners and institutions. Relationships already exist with members of the Unisig consortium including Alstom, CAF, Siemens and with Thales and Kontron who all attended the public demonstration in December, as well as Czech research centres including the Czech Technical University in Prague, the University of West Bohemia in Pilsen, Brno University of Technology and the University of Zilina.

Testing of the automated technology is moving to a second line acquired by AZD, the 22km Kopidlno - Dolní Bousov line. This is currently being upgraded ready for the testing to begin.

Chrdle expects autonomous operation to begin within two to three years once legislative hurdles have been cleared. Until then AZD will use its own infrastructure to prove the safety, reliability and efficiency of the technology.

He says work is underway to install the communication part of the system on the line based on GSM-R and 5G telecommunications as a new project. “We will install the electronic interlocking as our standard product, and we installed our trackside part of ETCS and prepared technology for level crossings,” he says. Diagnostic systems will be installed to support not only the operation of the train but to also provide updates on the condition of the track via sensors, which Mr Antonín Divis, AZD deputy director for R&D, says will offer a higher level of safety.

Initially the aim is to use technology already available on the market, but Divis says AZD plans to develop its own control and diagnostic support systems that retrieve the data, and convert it to usable information.

Chrdle says that while AZD may own its own lines, the connections with main lines remain state-owned and so cooperation with SZ, the national infrastructure manager, is required to expand the reach of these autonomous technologies. Discussions began on January 13 regarding the possibility of the autonomous operation.

“Our intention is that for the next two years we will test systems on our line, and that in 2025 the autonomously-operated train will be able to operate amongst other trains operating either through manual or autonomous operation,” he says.

Divis says various degrees of automation have been in use in the Czech Republic since the 1980s, but it is only based on static data and data working independently on every train. The initial challenge for AZD is to develop the infrastructure that allows existing systems to send dynamic data of the location of every train to trace the journey profile.

AZD European affairs director, Mr Vladimir Kampík, says that the company’s strategy is to support the infrastructure manager as much as possible. There needs to be an increased level of ETCS equipment installed at trackside, which should be the responsibility of the infrastructure manager he says. Most of that technology installed is Level 2 says Divis and this means that once that is installed it is very easy to install ATO.

As part of the planned testing programme on its own railway, AZD is working on a strategy that would also include the wider use of GoA 3 and even GoA 4. However this remains in the developmental stage, but any demonstration will include operations between eight stations.

AZD believes that there is the opportunity to develop automation by prioritising certain areas for development at differing GoA depending on demand. For example, Divis says short branch lines are ideal for full automation due to the low passenger numbers. On some corridors on the main network he expects the driver to remain, with GoA 2 or 3 preferred.

Chrdle makes the case that autonomous operation will reduce the need for personnel, increase safety, possibly increase the number of trains and improve punctuality. “This is why we are doing this,” Chrdle says. “We are trying to influence the future to avoid closures.”

Chrdle argues that automation is not just an opportunity for railways in the Czech Republic but every country in Europe. He advocates a switch from speaking about the solutions to putting plans in place, He also believes that the European Union should increase the pressure on the Czech government to act due to the benefits on offer. Unfortunately, he says the government is not yet moving in the same direction as the EU.

The delayed trial is the latest step in a journey that could eventually revolutionise Czech railway. But Chrdle is adamant there needs to be support from politicians and authorities to expand this opportunity more widely. The technology is available, and work is continuing to take it to the next level.

“The challenge is whether there is real support, and not only spoken support for the railway operation as an ecological mode of transport?” Chrdle asks. “There must be the political will to do this.”