How cooperation can get rail freight flowing along the Rhine

Europe’s TEN-T rail corridors have a lot of potential to improve rail freight performance and win traffic from other modes. However, as Christoph Kaupat, strategy, research and international standards project officer with the EU Agency for Railways, argues, cooperation between neighbouring countries, particularly along the Rhine valley, needs to be improved to overcome bottlenecks and capacity problems. 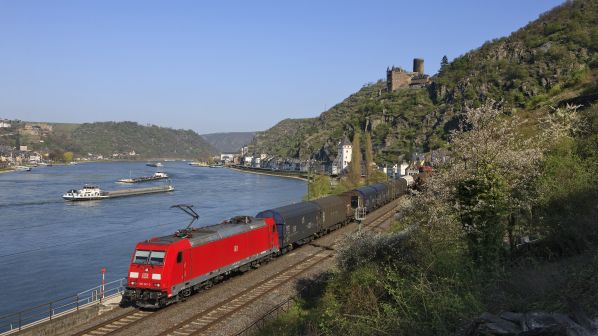 THE European Union’s TEN-T network of rail freight corridors were established to optimise the use of the rail network and improve reliability, with a view to making rail freight more competitive and encouraging a shift from road and water to rail.

The regulation also establishes procedures to strengthen cooperation regarding allocation of international train paths for freight trains between infrastructure managers. Using the example of the Rhine-Alpine freight corridor linking Zeebrugge, Antwerp, Rotterdam and Amsterdam with Genoa via Germany and Switzerland, there are some capacity issues and cooperation problems which still exist, despite all the regulatory efforts.

The Rhine-Alpine freight corridor comprises 2400km of principal lines, plus 880km of connecting lines and 620km of diversionary routes, and serves six sea ports, 10 inland ports and 100 main terminal facilities. While some countries have invested massively in their infrastructure to boost rail freight on the corridor - the Netherlands constructed the Betuweroute which opened in 2007, while Switzerland built the Lötschberg and Gotthard base tunnels - others have done very little.

Nevertheless, according to Corridor Rhine-Alpine’s 2016 annual report, traffic has been growing strongly since the 2009 world economic crises. Only the Swiss-Italian handover stations have not yet handled as many trains as they did before the crisis.

Aachen West, the handover point between Germany and Belgium, also shows a slightly negative trend, as more trains use alternative crossing points. The disadvantage of Aachen West is the 1600-tonne maximum train weight restriction between Aachen and Montzen yard in Belgium and the need to use banking locomotives for diesel-hauled trains. Additionally, freight trains arriving from Antwerp have to reverse at Aachen West to continue east along the corridor towards Cologne.

Roughly 65km of the Rhine-Alpine corridor passes through Germany’s Upper Middle Rhine Valley, a Unesco World Heritage site. This stretch of the valley, with its castles, historic towns and vineyards, graphically illustrates the long history of human involvement in this dramatic and varied natural landscape. The valley is intimately associated with history and legend and for centuries has exercised a powerful influence on writers, artists and composers. This part of the river is also called the Romantic Rhine and among those drawn to its beauty was Joseph Mallord William Turner, one of the 19th century’s greatest landscape painters. Turner is also credited with making the Rhine Valley a popular destination for English travellers. In 1817 he made his first trip to Holland, Belgium and the Rhine in Germany. He travelled up the river from Cologne to Mainz by boat or on foot, often crossing it by ferry.

Today, the Upper Middle Rhine Valley is a densely populated region, with many villages. Houses in the steep valley are often located very close to roads, the river or the two electrified double-track railway lines on each bank of the river. This causes conflict between villagers and the railway, as the villages are severed on a regular basis when level crossings are closed for long periods to allow freight trains to pass. The local population has protested against freight train noise and managed to lobby successfully for a federal law to ban noisy rail freight wagons from the end of 2020.

The population of the Upper Middle Rhine Valley has also lobbied for the construction of a 118km alternative line, which has been accepted by the Federal Ministry of Transport and Digital Infrastructure as a project for inclusion in its 2030 Federal Transport Infrastructure Plan. The new line will run from Cologne to the Wiesbaden/Mainz area to the east of the Rhine Valley. DB has not defined an alignment for this huge project yet let alone detailed financing and planning. 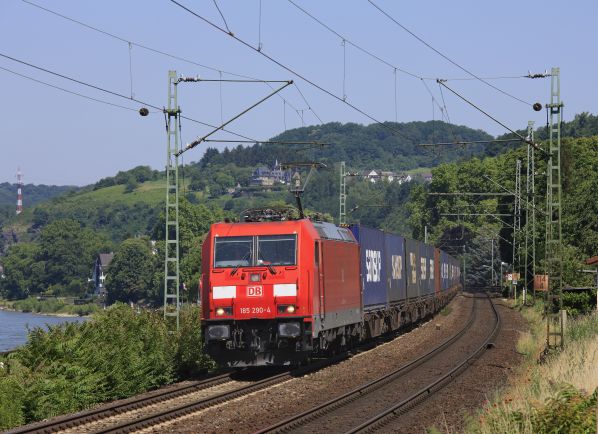 The proposed line has the advantage of connecting two of western Germany’s most densely-populated areas, namely Cologne and Frankfurt, with fewer people residing there than in the Rhine valley. However, as it will pass through a hilly landscape many tunnels will be needed, meaning that the cost of the project is likely to be very high.

Indeed, the parallel Cologne - Frankfurt passenger-only high-speed line, which also has numerous tunnels, cost €6bn to construct, based on calculations made at the end of 2002. This project suffered several years of delays due to geological problems, and the construction of a new freight line is likely to be time-consuming with significant potential for delays.

However, from an operational point of view, it is not always necessary to route North Sea - Italy freight trains through the congested centres of Cologne and Frankfurt, and it might be more efficient to avoid these areas.

A much shorter and cheaper alternative to the Cologne - Mainz project exists which has not been considered yet. A new line around 50km long could be built from Eupen in the east of Belgium to Jünekrath in the Eifel area of Germany on the Cologne - Trier - Saarbrücken line, which merges with the North Sea - Mediterranean freight corridor.

The major advantage of this proposal is that the new line runs through a rural area with little population and the route mostly uses existing infrastructure, albeit mainly single track and not electrified between Jünekrath and Trier. The route would cut at least 60km off every trip from Belgium to Basle, thus reducing travel time by around 1 hour per train. In addition, the Eupen - Jünekrath line should cost about half that of the Cologne - Mainz freight line to build. At the same time, noise emissions would affect fewer residents along the line compared with the Upper Middle Rhine Valley.

Nevertheless, diverting Belgium - Basle freight trains through Eupen and Trier would increase the capacity, flexibility and efficiency of Rhine-Alpine corridor. It would also provide a much-needed diversionary route should the Mannheim - Basle main line ever become blocked again as happened in August 2017 when a tunnel collapse at Rastatt caused massive disruption.

However, this proposal is not even being considered at the moment despite its merits. Surely it is time for better cooperation along the banks of the Rhine?