Despite stiff opposition, funding disputes, and delays, German Rail’s controversial and ambitious Stuttgart 21 project is now making steady progress. As David Briginshaw and Anitra Green report, the project will radically alter the rail network in the Stuttgart area when it is finally completed in 2025. 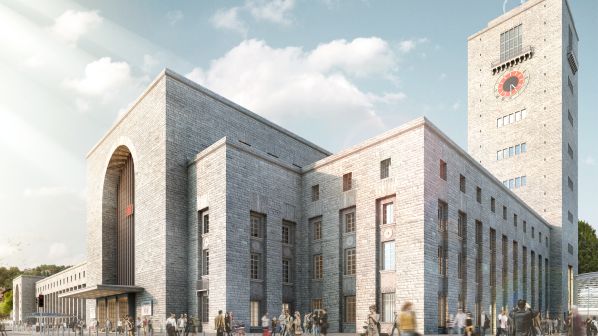 An artists impression of the historic Stuttgart station building with its tower which is being retained.

THE ambitious project to replace Stuttgart’s terminus station with an underground through station and build a new direct line to the city’s airport and exhibition centre was originally launched in 1994. However, Stuttgart 21 has been dogged by controversy since the outset due to disagreements over funding and mounting opposition from politicians and local residents who questioned the project’s value for money in the face of rising costs and the destruction of landmark buildings in the city centre.

The cost of the project was originally estimated at around €2.5bn, but by 2009 this had risen to 44.5bn with funding split between the state of Baden-Württemberg, Stuttgart city council, Stuttgart Transport Association (VVS), Stuttgart Airport and German Rail (DB). However, costs continued to mount with DB blaming a building boom for higher-than-expected prices from contractors.

Nevertheless, DB was determined to push ahead and started work in 2010. This only enflamed opposition further leading to violent protests. It was only after a referendum in 2011, which backed the project, that work could finally get going properly.

There are still some protests, but they are far less serious than before thanks to a public relations campaign that includes guided tours round the building sites and a multimedia exhibition in the station’s iconic square tower.

Even so, costs continued to rise, with the total cost officially estimated at €6.5bn in March 2013. On January 26 2018, DB’s Supervisory Board approved a financing framework of €8.2bn for Stuttgart 21, which includes a €495m risk buffer. Stuttgart 21 is being financed by DB, the German federal government, the European Union, the state of Baden-Württemberg, the City of Stuttgart, Stuttgart Airport and VVS.

In total, DB is building five new stations, 120km of tunnels and 81 bridges.

Construction is also taking far longer than expected. Stuttgart 21 should have completed by last year. However, the completion date was first extended to 2022, and subsequently slipped to 2025.

Stuttgart 21 will be linked to a new high-speed line being built from Wendlingen, to the east of the city, to Ulm, which will effectively extend the Mannheim - Stuttgart high-speed line to Ulm en route to Munich when it opens in 2022. DB expects more than 10 million long-distance passengers a year to benefit from the Stuttgart - Ulm project.

The cost of the Wendlingen - Ulm line section is budgeted at €3.7bn as of December 2017, with DB funding €141m, Baden-Württemberg €950m and the German government and the EU the remaining €2.6bn.

Both projects are being managed by DB Project Stuttgart-Ulm, which was set up in 2013. In total, DB is building five new stations, 120km of tunnels and 81 bridges. The new through main station in Stuttgart will also mean that there are many new direct links for regional traffic, which will take the pressure off Stuttgart’s S-Bahn network, already operating at its limit.

The core of the Stuttgart 21 project is the new eight-track underground station for through trains. The new station will run along the side of the existing main station building, at an angle of 90° to the existing terminus station. The historic station building with its tower is being retained, and DB is investing €200m in the €250m renovation scheme. Supports have been inserted beneath the building to allow the new station platforms and track to be constructed.

Meanwhile work is in progress on constructing new lines forming a circle around the city centre, mostly in tunnels, and including the new Mitternacht S-Bahn station. On July 20 the project partners celebrated the start of the main construction work for the rail connection at the airport and the city’s main exhibition centre.

Once the new main station opens in 2025, the existing terminus station will close and the whole area, in the heart of the city, will be free for redevelopment. Out of the total of about 100 hectares, 20 hectares will be reserved for parks and green areas. Two new districts will be created - the Europaviertel and Rosenstein - under a framework plan developed in 1997.

Stuttgart 21 is underway at eight construction sites. To the north, tunnels are being built to provide better connections to Feuerbach and Bad Cannstatt. To the south, the Filder tunnel will provide a direct line to Stuttgart airport and the exhibition centre, as well as a better connection with the Gäubahn line to Boblingen. From the airport, a new line is being constructed parallel to the existing highway to Wendlingen am Neckar as part of the new Stuttgart - Ulm high-speed line.

The first phase will involve equipping the lines radiating from Stuttgart to Feuerbach, Bad Cannstatt, and Sommerrain to the north, Untertürkheim to the east, Filderstadt-Bernhausen near the airport, and Goldberg to the southwest. The entire S-Bahn network will follow by 2030, including lines also used by long-distance, regional and freight trains.

The 60km Wendlingen - Ulm line is designed for 250km/h operation and is being built in seven sections. Half of the route consists of nine tunnels, otherwise it runs parallel to the A8 highway. The new line takes a more direct route than the existing Stuttgart - Ulm main line, crossing the Swabian Jura hills further to the south.

The Stuttgart 21 partners have also agreed on a pilot project to introduce a digital signalling and train control system.

Around 40 rail and road bridges are being built. One of the two major bridges crosses the Neckar river at Wendlingen, and is 136m long at an altitude of 271m above sea level. The other, the 458m-long Fils Valley bridge between Mühlhausen im Täle and Wiesensteig is an even more imposing structure. At an altitude of 485m, it is one of the highest railway bridges in Germany. The bridge connects the Boßler tunnel with the Steinbühl tunnel directly. “This rare combination of tunnel-bridge-tunnel is architecturally and technically demanding,” says DB. The existing railway bridge over the River Danube in Ulm has already been widened to accommodate four tracks under a joint project called Neu-Ulm 21, and was completed in 2007.

The highest point of the new line is at 750m, which means a climb of almost 500m on the 16km uphill section from Wendlingen towards Ulm. This is too steep for heavy freight trains, so the new line will be restricted to trains weighing a maximum of 1500 tonnes.

According to DB, the shell of the new Wendlingen - Ulm line is 90% complete. More than 60km of tunnel bores have been completed. Equipping the line is also making good progress with 37km of track already laid and 800 catenary masts erected.

Completion of the two projects will have many benefits. The high-speed line will open in 2022 and will be used by two or three high-speed passenger trains per hour. The non-stop trip from Stuttgart to Ulm will take 30 minutes, compared with 58 minutes today. The line will also be used by regional trains which will stop at a new station being built at Merklingen, though this is not actually part of the main project and was planned and financed separately. Regional trains will take 41 minutes to complete the journey.

Stuttgart’s main station can currently handle a maximum of 35 trains per hour today, but with the start of the new timetable in December 2025, the new through station will have capacity for 42 long-distance and regional trains between 07.00 and 08.00.

The new lines leading to the new main station will also permit much higher speeds, with a maximum of 160km/h. In future it will be possible to approach the station at speeds of up to 100km/h, whereas trains today are restricted to 20km/h, which will help to reduce journey times.