GE Transportation confirmed on September 19 that Indian Railways has accepted the 3.36MW variant of its Evolution Series diesel-electric locomotive for commercial operation. 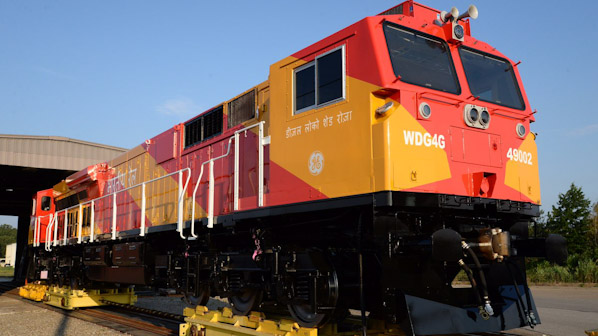 GE was awarded a $US 2.5bn contract in November 2015 to supply 700 3.36MW ES43ACmi locomotives (designated WDG4G by IR) and 300 4.47MW ES57ACi units over an 11-year period through a joint venture with IR.
The first 40 locomotives are being built at GE’s plant in Erie, Pennsylvania, while the remaining 960 units will be assembled at a new joint venture production facility at Marhowra in the Indian state of Bihar. Localisation will ultimately be stepped up to 70% of the value of each locomotive.
The first locomotive was delivered to India in February and GE says the project is on track, having achieved several key milestones. Currently, 45 of the locomotives are in India ready for inspection and acceptance by IR. GE says a purpose-built maintenance depot at Roza in Uttar Pradesh is ready for operations and the Marhowra plant is nearing completion.