With India’s urban population increasing from 285 million in 2001 to 473 million in 2021, the country is focusing on rapidly expanding metro networks to ease congestion. But as Srinand Jha reports, this is not always running as smoothly as planned. 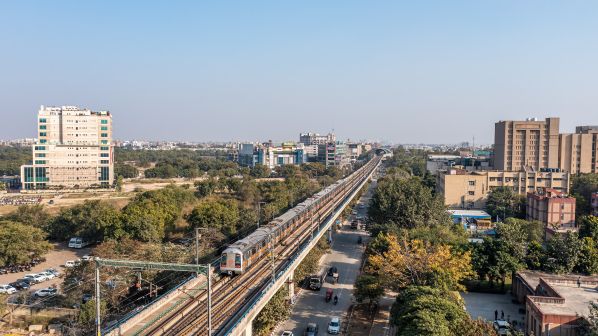 Nearly a third of India’s population lives in cities, with the urban population growing from 285 million in 2001 to 473 million in 2021. Major transport projects are needed to ensure this major growth does not cause congestion. Photo: Shutterstock/ Vibgyor Studios

STATISTICS provide credence to the notion that there is a metro revolution underway in India. The country’s 723km of metro lines are spread across 18 cities, with another 1000km at varying stages of construction. India’s Ministry of Urban Development, which oversees such projects, is likely to approve another six projects this year.

In an indication of the national government’s intentions for metro, the finance minister, Ms Nirmala Sitharaman, said in her budget speech on February 1, spending on metro projects across the country would increase to Rs 191bn ($US 2.51bn) in 2022, up from Rs 189bn last year. Overall mass transit received Rs 238.75bn.

India’s urban population accounts for 30% of the total, according to the government’s National Urban Transport Policy, growing from 285 million in 2001 to 473 million in 2021, with this expected to again nearly double to 820 million by 2051.

To meet the mobility needs of this growing urban population, the Indian government has been working on goals to meet the charter set out in the National Urban Renewal Mission (NURM), with considerable progress made on improving metro connectivity in the last seven years. However, for the first time, the budget recognises that to become centres of sustainable living, urban planning cannot continue with a business-as-usual approach.

As a result, the government is forming a high-level committee of reputed urban planners, urban economists and institutions to make recommendations on urban sector policies, capacity building, planning, implementation and governance. Support will also be provided to the states on aspects of modernisation of building byelaws, Town Planning Schemes (TPS), and Transit Oriented Development (TOD). Of the metro budget, Rs 350m has been allocated for transport planning and capacity building.

The budget also proposes innovative ways of financing and encourages faster implementation of metro projects. Multimodal connectivity between mass transit and main line stations is a priority for the government while the design of metros, including civil structures, will be re-oriented and standardised for India’s conditions and needs. This is an encouraging development.

There are now 18 Indian cities with a metro network. This compares with only five in 2014, when the overall length of lines was 284km. Metro ridership has consequently increased from 1.7 million passengers a day in 2014 to 8.5 million a day today. The national government is also actively considering low-cost mobility solutions such as MetroLite light rail networks to serve low population density areas, with projects approved in five cities; the MetroNeo trolleybus concept, which is targeting construction in Nasik and Warangal; and the WaterMetro, integrated ferry system in Kochi.

However, while these developments are encouraging, they remain a drop in the ocean compared with what is required to alleviate urban gridlock. An analysis of official figures emphasises the weaknesses in the current system. The 392km Delhi Metro still accounts for more than half of the country’s total metro lines, with several projects around the country frozen after opening short sections.

“The reason that several metro projects are becoming unviable is that they are only operational in small stretches.”

For example, little progress has been reported on the Gandhinagar Line, which will connect Ahmedabad with Gandhinagar in the state of Gujarat, following the inauguration of the first 4km stretch in January last year. A 9.6km line from Mansarovar to Chandpole Bazar as part of the Jaipur Metro began operating in 2015, but the project has not progressed further on account of administrative and engineering challenges, while the project’s financial feasibility has also been seriously questioned due to falling footfalls. Of the 14 metro lines announced for Mumbai, just one - the 11km Line 1 that opened in 2014 - is operational, with construction work on other lines halted by multiple factors including land acquisition issues.

Private projects have not fared better. Infrastructure Leasing & Financial Services (IL&FS) pulled out of the Rapid Metro Line project in Gurgaon in September 2019, and reports also suggested that Larsen & Toubro (L&T) - a stakeholder in Namna Metro - wants to exit. Only two Namna Metro lines are currently operational, while Phase 1 has missed nine completion deadlines and costs have been revised upwards four times.

“Ridership is not an issue in big centres and there has been no shortage of funding,” a senior consultant said, requesting anonymity. “The reason that several metro projects are becoming unviable is that they are only operational in small stretches. Unless two intersecting 20km lines are built, a metro line cannot become viable.”

Apart from the initial setback of about six months, the Covid-19 pandemic has not had an adverse impact on metro rail construction. Some consultants say Covid has actually been good for metro projects because a greater labour pool was available as industrial and road activities remained at a standstill.

Several small milestones are likely to be reached this year and next, including in Mumbai.

The 18km 2A section connecting Dahisar with Andheri West, lines 10 and 11, which are extensions of Line 4, and the 11km Navi Mumbai Metro that will have three-car trains, are due to open.

Other projects in the city though are facing difficulties. Completion of the 32.3km Line 4, which will connect Wadala in south-central Mumbai with Kasarvadavali in Thane district, and the 2.9km Line 4A extension from Kasarvadavali to Gaimukh, have been thrown into doubt after Alstom terminated a contract to supply 39 six-car trains last month. The manufacturer cited continual delays with civil works with only preliminary activities completed. Officials suggest that completion of the project could be pushed back by two years.

The decision to use narrower profile vehicles on the standard gauge network in Mumbai, potentially restricting capacity, also appears shortsighted. The decision by the Maharashtra state government to scrap plans to construct an integrated depot in the Aarey Colony area in favour of relocating the depot to Kanjurmal and subsequent disagreements over land ownership have also led to project delays.

Metro projects have often been announced in a hurry, usually in the run up to important state elections. Ahead of the recently concluded assembly elections in Uttar Pradesh, there was a flurry of activity on three metro projects. A small section of the Kanpur metro was inaugurated and there was heightened activity on Phase 2 of the Lucknow metro, the Agra metro and the Gorakhpur light rail project.

India’s Public Investment Board cleared the Gorakhpur Metro Lite project, although cabinet sanction has not yet been received. Experts say that such projects are justified on grounds of future traffic projections, which are often flawed. “Metro projects are certainly needed in India’s over-populated Tier 1 and Tier 2 cities,” an official said. “But the country needs a more robust institutional mechanism to ensure that the right decisions are taken.”

Consultants have also flagged issues with project leadership. They say that projects led by engineers - usually former IR officials - have progressed better than those that are overseen by “generalists” or officers from the Indian Administrative Service (IAS). The induction of IAS officers has often been justified on grounds that such civil servants are better placed to handle the civil clearances required for metro projects. “Such rationalisation has not been held up as civil servants, who have shorter tenures, have been found to have fewer stakes in project completion,” says Mr Subodh Jain, a former IR official who is now a consultant with Nagpur metro.

With many of the issues specific to a particular project, there is no silver bullet to solving the issues facing many of India’s urban rail projects. India’s metro revolution is necessary if the government has any chance of overcoming the issues caused by population growth. Hopefully the reforms that it is now proposing do the trick in alleviating many of the problems that have held back development in recent years.