Emerging technologies are helping light rail operators to escape some of the visual, operational and financial restrictions of overhead catenary. Keith Barrow reports from Augsburg on the development of Bombardier's induction-based Primove system. 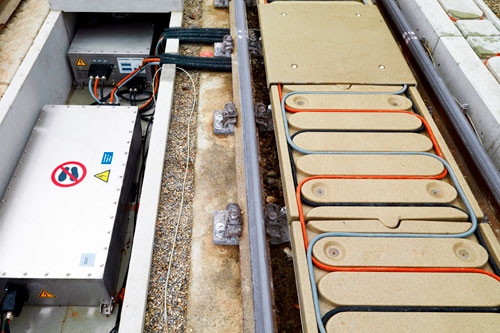 ONE of the defining trends in light rail technology over the last few years has been the emergence of catenary-free systems. Advances in supercapacitor and battery technology have spawned an array of catenary-free solutions and almost all of the major LRV manufacturers have developed their own products, many of which are now being offered commercially.

Bombardier's Primove system draws electrical energy through induction, using the same principles of power transfer used in an electric toothbrush. Primove LRVs draw power from a cable buried beneath the running rails which forms part of a primary circuit. This produces a magnetic field, which is converted back to electrical energy by a pick-up coil mounted underneath the vehicle. A short section of the cable, or primary winding, is only energised as the vehicle passes overhead, and can be safely laid under any surface, including tarmac, concrete, and grass.

A typical low-floor LRV would be equipped with two underfloor power receivers, each feeding roof-mounted power management and energy storage units at either end of the vehicle, which are also fed by the regenerative braking system. The power management unit feeds energy back to the traction motors as required.

Primove can operate with a supply voltage of 400-600V ac or 750V dc. The supply is fed to wayside inverters to power the vehicle detection antenna loop, which is laid alongside the track, and the primary winding, which is laid in 9m-long sections between the running rails. The primary winding is energised only when the vehicle passes overhead. Like the primary winding, the inverters and power supply network can be covered with any surface. Depending on the characteristics of the route, 10-25% of a typical light rail line would be equipped with the wayside equipment.

The system has charging power of 200kW, which feeds two 48kWh batteries with a transfer efficiency of up to 95%. Each battery weighs around a tonne - roughly the equivalent of 13 standing passengers - can load fully in 20 seconds, and has a 10-year service life expectancy under normal operating conditions.

The technology allows vehicles to charge dynamically or statically, which means Primove-equipped vehicles continue to draw current while standing at stations but use less power than conventional trams when in motion. This inevitably has an impact on the power supply architecture, and Bombardier says a line operating exclusively with Primove requires fewer substations than a line with standard catenary.

"The key to Primove is energy management," says Bombardier's Primove product director Mr Harry Seiffert. "It's all about achieving a trade-off between stress on the battery and the power supply infrastructure. The fact that there is no return current to the rail is also a key advantage."

Bombardier engineers first conceived Primove in 2003, and following a period of further development including input from the University of Braunschweig, it set up a 1km test track at its Bautzen plant in eastern Germany in 2009. Here a 30m-long Flexity LRV was tested at up to 40km/h on a 6% gradient.

The next step was to test the operating performance and electromagnetic compatibility of the system in an urban environment. In June 2010 Bombardier began installation of Primove on the 800m-long branch of Augsburg Line 3 to the city's exhibition centre, a project implemented in cooperation with the Augsburg Transport Authority (SAV) with grant funding from the German Federal Ministry of Transport Building and Urban Development (BMVBS). Test operation began in September 2010, using a bidirectional Flexity low-floor LRV, and the system was approved for limited passenger use a year later.

During this evaluation phase, Bombardier engineers worked with external assessors such as Tüv Süd to ensure Primove achieved all applicable electromagnetic compatibility standards, including the guidelines of the International Commission on Non-Ionising Radiation Protection.

Bombardier says a new LRV equipped with Primove costs around 10% more than a standard vehicle, although it aims to achieve equivalent operating performance and cost to catenary-based systems on a life-cycle basis, and even exceed the capabilities of overhead electrification in areas such as energy consumption. "It's clear trams won't run on Primove unless we are competitive on cost, so we need to be in the same range as conventional vehicles because cost is important to the market," explains Bombardier Transportation CEO Mr André Navarri. "You also have to factor in the price of the overall system, and the charging strategy for the line. The price of Primove components will decrease over time, and our simulations have demonstrated the system is cost-effective on a whole-life basis."

In addition to the elimination of unsightly catenary masts, Primove can also reduce the land area required for light rail projects. A double-track line with Primove requires a 7.05m-wide corridor, compared with the 7.6m footprint of a line equipped with overhead catenary.

Bombardier is pitching Primove as a system that completely obviates the need for catenary, while maintaining or improving on the performance of overhead electrification. The system is totally weather independent, and the Primove demonstrator has been successfully put through its paces in heavy snow and over sand-covered track with no loss of performance.

But what really sets Primove apart from competing catenary-free technologies is the potential of the system beyond light rail. A 125m-long setion of public road in the Belgian town of Lommel has been equipped with Primove, and tests are underway with a bus and a car. In June Bombardier and Braunschweig Transport launched a BMVBS-supported project to test two Primove-equipped buses on a 12km bus route in the German city. Bombardier is also extending the technology to commercial vehicles and is testing a van with a new prototype power receiver for smaller road vehicles at its eMobility facility in Mannheim.

Bombardier anticipates that the global electric bus market will represent 235,000 new vehicles over the next decade, and the value of the electric bus/taxi market is expected to increase from $US 6.24bn to $US 54.1bn by 2021. As light rail systems are almost universally electrified, the arguments in favour of adopting induction technology are naturally quite different from those for road vehicles. But the extension of Primove to other modes means economies of scale and the commonality of components could help to make this innovative technology even more accessible for future light rail projects.