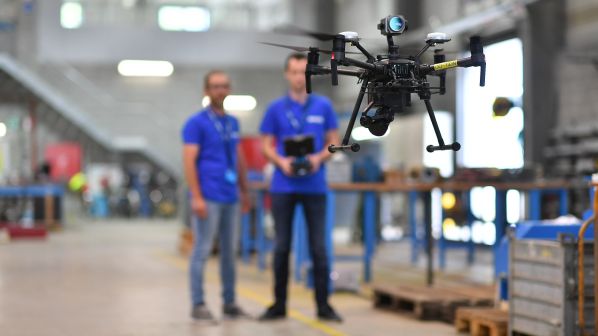 Infrabel is using drones to monitor assets and infrastructure to support maintenance planning and incident management.

BELGIUM boasts one of Europe’s busiest railways - 6500km of main line track currently hosts more than 4000 trains every day. And with on time performance slipping to 87.2% in 2018, the pressure is building on infrastructure manager Infrabel to align network reliability more closely with the needs and expectations of increasingly-demanding customers.

As part of its work to meet this challenge, Infrabel is actively exploring the use of new digital technologies. The goal is to improve both the efficiency and effectiveness of infrastructure and the work of the teams charged with carrying out maintenance, enhancement and repair work. In practice, this means replacing manual inspections which require track possessions with automated processes in order to minimise line closures. It also means shifting from interval-based to predictive maintenance.

Infrabel’s strategy to deliver these updates and changes began in 2014 under the Smart Railway Project. In the beginning this involved what smart railway programme director, Mr Carel Jonckheere, describes as a painstaking process of digitising infrastructure and asset information. Paper records have been replaced by a centralised online database and integrated decision management system, provided by SAP, which includes relevant text, geolocation, technical drawings, images and videos to offer a detailed snapshot of the current status and history of a specific asset. Technicians are able to access and update this information from a tablet computer at the trackside.

Thousands of sensors have also been installed across the network, feeding information into the database and helping the infrastructure manager to step-up data capture with the objective of building an ever-more vivid picture of an individual asset’s performance and condition.

Now that this initial capturing work is over, the process has shifted to identifying and developing technologies and processes that can use this information to enhance the IM’s work with the goal of completing the digitalisation process by 2024. Many of these were exhibited and demonstrated during a special event at Infrabel’s Schaerbeek workshop in Brussels in June and they already seem to be having an affect: on time performance improved to 91% in the first eight months of 2019.

By analysing the data and applying an algorithm to detect anomalies, the system can identify issues such as shocks in the catenary.

In a temporary building, 18 separate exhibits demonstrated various innovations at different stages of development, from initial proof-of-concept and prototyping to some solutions which have or are being rolled out into live operation. Among the highlights were examples of the use of pantograph inspection systems which are in use at eight locations in Brussels, mapping drone images to support infrastructure monitoring, and Lidar detection for lineside vegetation management.

Outside, visitors were invited to board two of Infrabel’s inspection vehicles, EM130 and EM201. On EM201, developers showed off the latest catenary and signalling infrastructure inspection technology using high-definition cameras and shock-detection equipment, all of which foresee future Artificial Intelligence (AI) and machine learning applications. By analysing the data and applying an algorithm to detect anomalies, the system can identify issues such as shocks in the catenary. Similarly, EM130 also utilises advanced video and measuring equipment to detect fractures in steel to less than 2mm, or deviations in rail or track profile.

Technicians working on the vehicles are seeking opportunities to enhance maintenance planning and eliminate unnecessary and time-consuming track possessions. For example, rather than manually inspecting six to eight switches per day, EM130 can cover 60-80 and identify whether further manual inspection and possible repair is required. This has cut manual inspections significantly reducing costs as well as the risk of an incident during inspection tasks.

“The maintenance procedures that we carry out, replacing track and repairing infrastructure, will remain largely the same,” Jonckheere says. “What we can do differently is to use this time more effectively and make more informed decisions on what needs to be replaced at a specific time.”

Visitors were also invited to tour the Schaerbeek workshop itself, where a virtual reality presentation offered a glimpse of the ‘warehouse of the future.’ At the heart of the presentation is a centralised spare part supply system using automated technologies and logistics techniques pioneered by companies such as Amazon. The goal is to improve both the efficiency of spare part supply and delivery, and to reduce potential waste - the value of assets in storage at locations across Belgium is estimated at around €280m. “We are currently waiting two to three days for spare parts to be delivered,” Jonckheere says. “The internal web shop will mean that if you order one item, you will receive it by the next morning. If you are used to it with Amazon, why can’t we achieve that as well?”

The objective is to have such a system in place by 2022. Ahead of this, trials of several prototype technologies are taking place to assess their value to support the warehouse. These include automated RFID tag recognition, voice-activated instructions, and augmented reality glasses, which enable workers to scan QR codes or locate a specific storage location for a product meaning two hands are always free. A new warehouse management system will also offer optimised routes for pickers.

In general, Jonckheere says Infrabel has divided the process for developing new technologies into three categories: protecting people and safety; mobile inspection; and train management of the future.

However, there are some solutions which offer multiple applications and cross these subsections. Infrabel is deploying drones to monitor the condition of infrastructure assets such as GSM-R masts, catenary and bridges as well as to observe construction sites and areas where incidents have occurred. The infrastructure manager currently has 10 drones and seven staff members are trained as pilots. The Schaerbeek site will also soon benefit from an automated drone system to monitor potentially vulnerable assets such as copper cabling.

When deployed at a work or incident location, images captured by the drones can be relayed to a tablet computer at the trackside in order to inform decision making. The images from the HD cameras also support “drone to map” applications, including three-dimensional modelling of assets and infrastructure, supporting maintenance planning. Likewise, a train-based Lidar project is supporting this process by accurately mapping trees and other lineside assets, providing an accurate digital image of possible construction sites for planners.

Another system already in use and falling within the safety element of the project is an Automatic Train Warning system for use by track maintenance staff. Developed by Zöllner, Germany, this mobile system manually controls signalling in a localised area and informs track workers of an approaching train so they can leave their worksite safely. The operator uses an RFID tag to inform the system that workers have left the area, enabling the train to proceed without disruption and ensuring that track workers are safe.

Project planning is also benefitting from a new approach. Infrabel is using Building Information Modelling (BIM) to support the development of new projects by providing developers and users an accurate computer-generated image of how a new piece of infrastructure will operate and be used before it is built. These techniques are helping to prevent costly errors and to optimise construction techniques.

Other concepts which are in the early stages of development and may be of use in their current or an evolved form include augmented reality applications for maintenance personnel. Like at the warehouse, the status of specific components and instructions for maintenance tasks can be displayed on specifically-designed headsets, leaving the technician’s hands free to work.

Infrabel is also developing smart traffic management capabilities. The solution on show utilises a digital twin to model potential operational disruptions while harnessing AI to enhance traffic planning decision making depending on the location and type of incident. The system is an evolution of a traffic management system launched in 2016, which tracks all rail traffic in real-time, offering reliable predictions for each journey and flagging possible conflicts by monitoring data ranging from the type of train, authorised speed, and scheduled works. This data feeds into passenger information systems and is part of Infrabel’s New Traffic Management policy to concentrate operations at 10 traffic management centres.

Infrabel’s work on the Smart Railway programme has received wider recognition and several awards, securing accolades at Belgium’s Corporate IT awards in November 2018. Jockheere says it is encouraging that the wider sector is aware of what the infrastructure manager is doing and that its work is having an impact.

“The biggest challenge we face is to channel the enthusiasm and innovative spirit of Infrabel staff to deliver usable solutions,”

However, Jonckheere lists several challenges Infrabel faces as it continues on its Smart Railway journey: maintaining up-to-date databases; reacting to new technologies as they become available, notably 5G, automatic train operation and automated road vehicles; and effectively processing the huge volumes of data retrieved - a single inspection vehicle shift of six to eight hours can generate 2.5-3 terabytes of data, meaning it is a major challenge to use this data in a manner that improves rather than overwhelms the decision-making process.

Critically though Jonckheere says the work requires the cooperation of staff, both to innovate and support the objectives of the programme, and to accept and adopt the new ways of working.

“The biggest challenge we face is to channel the enthusiasm and innovative spirit of Infrabel staff to deliver usable solutions,” Jonckheere says. “This has been central to our progress and success so far, and will remain so in our future work.”

Recruiting skilled staff is another challenge facing Infrabel. However, Jonckheere says the Smart Railway programme shows that it can counter the perception that it is an old-fashioned company, helping it to attract talent in a competitive labour market.

Infrabel has certainly made impressive progress with its digital strategy. And while the infrastructure manager is not alone with exploring how digital technologies can improve performance - French National Railways (SNCF), German Rail (DB), Network Rail, and Netherlands Railways (NS) are among those engaged in similar strategies - it offers valuable lessons to smaller networks. In fact, for Jonckheere, Infrabel’s relative scale - out of a team of 80-120 people just 10-15 key people are leading the different parts of the programme - is offering it an advantage.

“Our small size definitely offers us greater agility to try things and move on if they don’t work,” he says. Indeed, for all of the innovations present at the Digital Days exhibition, Jonckheere says not all the technologies developed will emerge as a solution for the IM. Often the experience from developing these ideas is just as valuable. “You should not be afraid of failure,” he says.