The first stage of Australia’s Inland Rail project to accelerate freight trains between Melbourne and Brisbane opened on September 16. Regional Editor Tony Duboudin reports on this ambitious but controversial project. 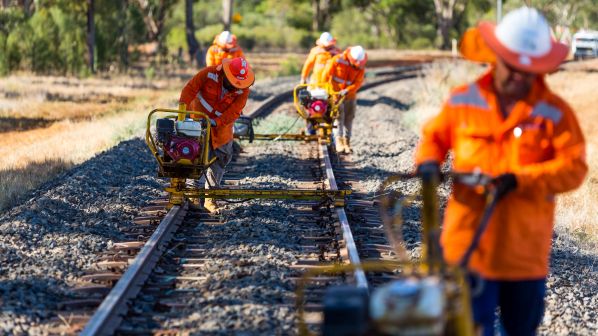 The opening of the Parkes - Narromine section on September 15 marked a major milestone for the Inland Rail project. Photo: ARTC

AUSTRALIA’s 1700km $A 10bn ($US 7.3bn) Inland Rail project is the country’s largest rail freight scheme and is designed to cut rail transit times between Melbourne and Brisbane. Despite the first section between Parkes and Narromine in New South Wales opening last month, the scheme still has its critics and challenges.

Inland Rail has been described as a nation-building project and a once in a lifetime opportunity, but has also been dubbed a potential white elephant and is currently the subject of a Senate inquiry, while the final route through Queensland has not yet been finally fixed.

The project is being funded by the federal government through Australian Rail Track Corporation (ARTC) in the form of equity plus investment by the state governments of Victoria, New South Wales (NSW) and Queensland.
Inland Rail is designed to cut the transit time between Melbourne and Brisbane to less than 24 hours, helping to make rail more competitive with road, taking hundreds of trucks off the highway and bypassing the bottleneck of Sydney.

Another major benefit of Inland Rail will be its ability to run double-stack container trains up to 1800m long on 60kg/m rails. Axleloads will be 21 tonnes at 115km/h and 25 tonnes at 80km/h with future proofing for 30-tonne axleloads in green-field sections and all new structures.

All new track will be able to accommodate double-stack trains and the interstate line from Melbourne to Illabo in NSW will be upgraded to handle these trains. A combination of new and upgraded tracks will then be used via Parkes, Moree, Toowoomba and Calvert to reach the existing interstate line at Kagaru, and then on to Bromelton, south of Brisbane, and the Brisbane suburb of Acacia Ridge.

One of the criticisms of the project is that the existing line from Acacia Ridge to the Port of Brisbane cannot handle double-stack trains, meaning that containers will have to be offloaded to access the port.

ARTC says a wide range of producers will use Inland Rail to transport mainly domestic freight between the cities. These include non-bulk containerised freight such as manufactured goods, food, hardware and other packaged goods, as well as bulk goods like steel, paper and coal. It is for this reason that initially trains will not carry double-stack containers.

“It is in the national interest for the Inland Rail project to be completed as soon as possible to improve the speed, reliability and efficiency of the rail freight network.”

Passing loops on the line will be 2km long and will be located in areas which will allow them to be extended in the future if necessary.

Inland Rail will be ready to use the Advanced Train Management System (ATMS) being developed by ARTC together with Lockheed Martin.
The line in Queensland will be dual-gauge to facilitate connectivity to the state’s 1067mm-gauge network.

When completed Inland Rail will have connections to regional and national freight networks to provide standard-gauge links to the ports of Brisbane; Newcastle, Port Kembla and Sydney in NSW; and Melbourne, Adelaide and Perth.

The first element of the project to be completed, on which work started in 2018, is the 103km section from Parkes to Narromine in NSW. This involved upgrading 98.4km of the existing standard-gauge line and constructing 5.3km of new railway.

Inland Rail will iron out the many curves and deviations which date back to the colonial era and were dictated by parochial politics, state rivalry and topography.

The project has been split into 13 separate packages (see panel) involving the laying of 600km of new track and upgrading 1100km of existing track.
The largest works package is the 300km Narromine - Narrabri section in NSW while the shortest is Gowrie to Helidon in Queensland at 28km. The entire project is scheduled for completion in 2025.

With a $A 10bn price tag, some question Inland Rail’s cost:benefit ratio which has been estimated to produce a return of $A 1.10 on every dollar of public money invested - a minimal amount according to critics and dependent on the project being completed on budget, which is a rarity for most major Australian rail projects.

Mr Martin Baggott, a senior advisor to the World Bank and the Asian Development Bank on rail projects, says that Inland Rail is a 20-year-old concept and questions its economic return. “Overall, it will get used, but in economic terms it is not going to be measurable,” he says. “Although it is a nation building project… a project built for our grandchildren.”

Baggott says that it is vital that users can access the new rail line and to that end it is important that freight terminals are built along the route.

The Senate inquiry into the project, which is scheduled to report in November, has been tasked with examining the management of the project by the federal government and ARTC with particular reference to:

The issue of cost overruns was addressed by a submission to the inquiry by the Grattan Institute think tank which, as well as highlighting the poor return on investment, warned that “cost overruns are more likely and larger on average for large and complex projects.”

The submission by the Institute’s transport programme director, Ms Marion Terrill, also said that there appeared to be insufficient provision for “worst case” cost outcomes.

“It is now time to get on with completing the project to unlock the billions of dollars and vital new jobs that Inland Rail will deliver.”

However, ARTC rejects the Grattan Institute figures and says the benefits will be considerable.

Inland Rail CEO, Mr Richard Wankmuller, told IRJ he did not know what the Grattan Institute was basing its figures on. “The benefit:cost ratio is 2.6,” he says. “We are building a spine for the good of the country so there are going to be benefits that go way outside the ARTC into the broader economy and it is going to spur new business in many, many regions.”

Ms Caroline Wilkie, CEO of the Australasian Railway Association, the rail industry lobby group, told the Senate committee hearing that Inland Rail presents a “once in a lifetime” opportunity that will deliver significant national benefits. “It is in the national interest for the Inland Rail project to be completed as soon as possible to improve the speed, reliability and efficiency of the rail freight network and deliver long-term economic and social benefits to the community,” Wilkie says.

“This project is 15 years in the making and has been through extensive consultation, planning, route analysis, engineering and costing. It is now time to get on with completing the project to unlock the billions of dollars and vital new jobs that Inland Rail will deliver.”

The project is expected to contribute $A 16bn to Australia’s GDP and deliver 16,000 additional jobs during construction.

One issue yet to be resolved is the 16km section of Inland Rail in Queensland that crosses a significant flood plain at Millmerran that has been mired in controversy. The local community claims ARTC’s modelling for the Condamine River flood plain is wrong and that elevated track will lead to more flooding as well as land degradation impacting agricultural production in one of the most fertile areas in the country.

ARTC has countered that its flood modelling is sound and that to change the route would increase the projected Brisbane - Melbourne transit time of less than 24 hours, which is the major selling point of the project.

While ARTC says its proposed 2.5m-high levy bank will have numerous culverts and bridges to allow flood waters to pass without impact, farmers maintain the proposed design is fatally flawed. Objectors say ARTC’s modelling does not properly explain previous flood behaviour and stubble left in fields to protect soil will block the culverts and become wrapped around other structures, including bridge supports.

Wankmuller says that the work to evaluate the impact of the levy bank had been done to a very high standard. “We have brought in some global experts to reassure the public on the quality of the work,” Wankmuller says. “Now it is more about engaging with the community and building confidence.”

He says that the primary concern was the culverts being blocked, which would likely drive flood levels higher, particularly upstream of the culverts, and divert more flow through the bridge areas causing damaging erosion of soil downstream.

“One of ARTC’s mitigating factors is to allow for a baseline blockage factor of 25% for the proposed crossing solution culverts,” Wankmuller says. “This means the modelling assumes culverts are 25% blocked in order to ensure that they are still able to perform under these conditions.

“Also, to understand and quantify the impact of blockage factors on flood behaviour within the Condamine flood plain, a number of other culvert blockage factors were tested including up to 50% blockage. Results of the 50% blockage indicated the proposed solution is not regarded as highly sensitive from a blockage perspective because the majority of flood water flows through the proposed 6.1km of bridge structures across the flood plain.”

Wankmuller says the review requested by McCormack will look at a specific route through the Cecil Plains, to the west of the current route, and whether it would be preferable. “A change of route would have a huge impact on the project,” Wankmuller warns. “It would be hard to see a good valid reason for a change.”

The Covid-19 pandemic is also having an impact on the project and might delay completion. Wankmuller says getting workers to site is the real issue in Victoria, while key resources like signalling are in demand in Victoria, which will have an impact.

Overall, Wankmuller says that $A 1bn has already been spent on the project and that 80% of Inland Rail is “fairly straightforward” despite the fact that it is being built to a much higher standard than any other railway in Australia, while the remaining 20% is “challenging.”