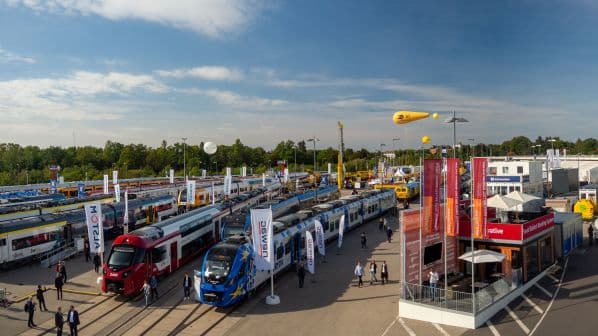 AFTER a four-year break caused by the Covid-19 pandemic, InnoTrans returned to Messe Berlin in September. IRJ’s editorial team pick out the highlights from the world’s largest railway trade fair and exhibition.

We have split the article across four separate posts. This is the first part of IRJ's review. Part two is available here, part three here, and part four here.

InnoTrans made its return following a four-year hiatus on September 20-23, with around 140,000 visitors attending over the four days. Messe Berlin hosted 2834 exhibitors across 42 exhibition halls while the outdoor area featured 124 vehicles and exhibits. Overall, the show was host to 250 world premieres of new technology.

With the 2020 event postponed and eventually cancelled due to the Covid-19 pandemic, there were questions over whether the 13th iteration of the show would attract the same demand as previous events. However, despite a significantly quieter Friday this year and noticeably less participation from Asia, patronage was only 13% lower than the record 161,157 attendees from 149 countries who visited the 3062 exhibitors in 2018. Indeed, traffic in halls 1-6 and the infrastructure area was heavy throughout the first three days of the event, to the delight of exhibitors.

“InnoTrans has once again impressively demonstrated that it is the industry summit that shows today what will be on the rails and roads tomorrow,” says Messe Berlin CEO, Mr Martin Ecknig.

“InnoTrans is also a platform for international exchange for a trans-European transport network. After the pandemic-induced break, InnoTrans 2022 has made a phenomenal return. At last the industry family has come together again. After a long wait we were able to exchange ideas in person and look each other in the eye.”

Messe Berlin says 56% of visitors were first time attendees, while 57.3% of attendees were from outside of Germany.

The theme of the event was “The future of mobility in times of climate change,” and this was reflected in the strong presence of alternative traction in the outside track area: Stadler’s hydrogen Flirt multiple-unit for San Bernardino, Hitachi’s Blues BEMU and Siemens’ Mireo Plus H and Mireo Plus B multiple-units were among the highlights.

Inside, the new Hall 27 was a popular addition, with Siemens’ vast three-story stand seemingly the talk of the exhibition. And while the general feeling was of positivity - that it was good to be back - an observation made by some visitors was the lack of any new truly game-changing technology. Instead, many of the more notable technologies on show were prototypes or promised projects from the last event that had been transformed into real-life solutions. Perhaps this is a symptom of two pandemic-impacted years, or possibly a change in industry mindset, away from innovation for innovation’s sake, towards delivering products that can make a tangible difference in the here and now.

The answer to this question might become clearer by the time the next InnoTrans rolls around. All being well, the 14th show is scheduled to take place from September 24-27 2024.

ADDRESSING the opening ceremony of InnoTrans on September 20, European transport commissioner, Ms Adina Vălean, highlighted the role of rail in the conflict in Ukraine and, looking to the future, the key part it will play in helping the European Union (EU) to become carbon-neutral by 2050.

She also threw down the gauntlet, telling the audience that much still has to be done to provide infrastructure adequate to meet the growing demands on rail and improve the service provided to the customer.

The crucial importance of a reliable and resilient rail network was stressed by German transport minister, Dr Volker Wissing, who noted that the country’s railway network is facing major challenges, including the impact of the war in Ukraine and the increase in energy prices.

Indeed, Wissing reported that one freight operator had been forced to resort to more polluting diesel traction after their traction electricity costs had increased by 1000%.

As Russia restricts gas supplies, the German rail network is carrying more coal and fuel, but on infrastructure that is not performing well due to the large number of upgrade programmes currently in progress.

“Without fuel transport, we would come to a standstill in all walks of life,” Wissing said. “Neglecting infrastructure can have fatal consequences. That is why I am in favour of having reliable infrastructure as part of our national strategy.”

Work to improve the reliability and resilience of the German Rail (DB) network will focus on 10 key corridors. “Everything will be done in one fell swoop with just one full route closure,” Wissing said, referring to German Rail’s (DB) new high-performance replacement strategy.

Building new lines is not the only way to increase capacity, the minister said, noting the potential of digitalisation to run more trains on existing routes, notably through the rollout of ETCS.

Lutz said that the DAC “has been discussed for decades but not implemented until now.”

For the DB CEO, adopting this new technology is vital to safeguard the future of wagonload freight traffic and grow rail’s market share in line with European Union (EU) environmental objectives. “All freight operators need to invest in this and we need to share the costs across Europe,” Lutz said.

Krapinec was blunt in his assessment. “It’s all about money,” he said. “The cost of equipping 20,000 freight wagons is inconceivable for us, it’s incredibly expensive and we would need support from the European Union.”

STADLER presented its new tri-mode Flirt train and CityLink tram-train to Transport for Wales (TfW). Both types of train are undergoing testing and the Flirt DEMU should enter service later this year followed by the tri-mode Flirt and tram-train in 2023. Stadler is building 71 trains for TfW as part of an £800m investment programme in new rolling stock. The order is divided into 36 tram-trains, 24 tri-mode Flirts and 11 Flirt DEMUs.

An eye-catching exhibit on the Vossloh stand was the new M-Generation track fastening, which the supplier says will improve performance and extend track life.

The new fastening features a brand new design resembling an “M,” where the spring arms are bent outwards, which Vossloh says optimises contact points at the rail base while reducing the stress concentration under static and dynamic loads.

It adds that the natural frequency is significantly higher than with previous tension clamps in the respective application area. Vossloh says that by accommodating the three-dimensional stress directions in “a unique geometry,” different stiffnesses and increased fatigue strengths are achieved at the same time. This helps to reduce lifecycle costs and enables the use of more elastic rail fastenings to further reduce vibrations.

Three M types are available and cover all track applications: M3 for high-speed and slab track; M7 for metro, and high-speed on ballasted track; and M9 for heavy-haul. Development began in 2018 and was conducted alongside TU Munich.

Vossloh says it has refined its the proven material through additional micro-alloying while further optimising the product’s properties to maximise fatigue limits. In combination with low-stress bending as well as improved hardening during the manufacturing process, it says CO₂ emissions can be reduced significantly over the lifecycle of the fastening.

Vossloh also showed its HSG City Smart, which as well as high-speed rail grinding at up to 60km/h, incorporates a monitoring system for rail cross and longitudinal profile. Data is fed into the supplier’s mapl-e online network visualisation tool, which enables users to identify hotspots across their entire network and can facilitate a predictive track maintenance programme.

The MoU specifically commits the two parties to support the further development of economic relations between Poland and Ukraine as well as both countries’ railway. Both parties vowed to hold periodic consultations on the development of rail transport and to take steps to implement projects that will transform both networks.

Mamiński emphasised PKP’s commitment to Ukraine “since day one” of the conflict, stating that more than 2.3 million people have travelled from Ukraine to Poland free of charge. “Events in recent months have led to cooperation between the PKP Group and Ukrainian Railways on a scale never seen before,” he said.

Kamyshin said his staff experience shelling every day, with at least 244 railway employees killed and 425 injured since the start of the war. He also reiterated Ukraine’s commitment to join the European Union.

“We have increased our capacity for freight with Poland,” he said. “It is important for us and for you to know that there are big growth opportunities for the EU. We have a 40,000km network stretching from the Black Sea to the Balkans. I am sure that will offer big value to our country, railway, and railway people.”

Later in the day, Kamyshin signed a MoU with Dr Richard Lutz, CEO of German Rail (DB), under which DB commits to provide post-war construction assistance as well as cooperation to expand freight corridors and capacity at freight terminals. DB also vowed to support the introduction of European standards for rail operation and management in Ukraine.

Under the plans, DB Cargo will help to develop new or expand existing freight corridors and terminals for transferring goods between 1520mm and 1435mm gauge. DB will explore the use of UZ hopper wagons, which can accommodate larger volumes of grain compared with containers, to boost exports by rail to the EU. It will also deliver spare parts.

In addition, DB confirmed that it will continue to help establish corporate structures at UZ which are a prerequisite for receiving financial aid for reconstruction.

“A functioning railway is essential for the country’s reconstruction,” Lutz said. “That is why we as DB and also with the entire European railway family stand firmly on the side of the Ukrainian railways. It is both an honour and an obligation for us to accompany UZ as a partner into a good future.”