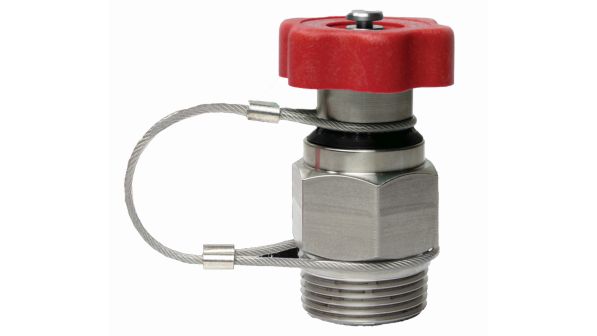 TO say that the Nordic region is cold is a gross understatement. Winter months in this part of the world are typically dark and cold, with temperatures regularly dipping below freezing and staying there well into spring.

While electric locomotives are relatively unaffected by the cold, traditional water-cooled diesel locomotives are vulnerable. To prevent these locomotive’s cooling systems from freezing and causing costly damage, rail operators implement freeze protection devices such as the Guru Plug drain valve.

The Guru Plug is a self-operating, thermostatic drain valve that monitors and responds to engine coolant temperature. Installed at the lowest point in the cooling system, the plug will continuously sense the water temperature and snap open to quickly drain the system when the temperature reaches the plug’s set-point. This prevents water from freezing in the system and causing potentially very costly damage. Once the freeze danger passes, the Guru Plug can be rearmed by warming up the cartridge so its internal thermal actuator resets and reinserting it into the hex nut. The coolant water tank can then be refilled before returning the locomotive to service.
Used by North American Class 1 railways, OEM’s and major short line locomotive operators, the Guru Plug protects millions of dollars in railway assets each winter and has proven functionality in even the most extreme environments.

To measure the effects of frigid air temperatures on the Guru Plug, ThermOmegaTech’s engineering team designed an experiment to replicate Nordic conditions.

The Guru Plug is a self-operating, thermostatic drain valve that monitors and responds to engine coolant temperature.

On January 6, ThermOmegaTech conducted an environmental exposure test to determine if extremely cold air temperatures could cause the Guru Plug to nuisance dump when engine coolant water temperature is above the valve’s release set-point. The test was performed in an engineering lab at ThermOmegaTech’s headquarters in Warminster, Pennsylvania, supervised by a qualified design engineer.

A Guru DL 2.1 Type-T valve was installed in a Tenny environmental chamber and exposed to 5km/h winds at -51.1°C in an attempt to trigger a nuisance dump. To simulate engine coolant in a functioning locomotive, the test was conducted with 12.8°C water flowing through the valve tee at 4.55 litres/minute.

Coolant temperature was monitored at the inlet and outlet of the environmental chamber and the flow was adjusted to keep the inlet and outlet temperatures relatively consistent at 12.8o°C. The temperature chamber door remained closed throughout the test to ensure environmental conditions were constant. To determine accurately if a valve release occurred, a LeakSmart sensor was placed inside the chamber beneath the Guru Plug, which would trigger an alarm should water come into contact with the sensor.

After two hours of exposure, the Guru Plug remained closed. There were no instances of nuisance dumping above the Guru Plug’s set-point due to the extremely low air temperature or wind exposure.

This test confirmed that 12.8°C engine coolant flowing at 4.55 litres/minute would provide sufficient heat or energy for the Guru DL 2.1 to remain closed despite the harsh weather conditions. The test also confirmed the benefits of sensing the coolant fluid’s temperature, compared with sensing the ambient air temperature. Due to the Guru’s fluid-sensing design, it can operate effectively in environments where ambient sensing products cannot.

To verify the test’s results, the 12.8°C coolant flow was removed, leading the Guru Plug to release as expected.

For Nordic locomotive operators, the common practice of continuously idling water-cooled diesel locomotives while not in use to prevent freezing - whether for a brief stop or an overnight layover - inevitably results in hefty fuel costs. Implementation of the Guru Plug eliminates this costly procedure, saving operators far more than the cost of the Guru Plug itself and reducing excess emissions.

In addition, the Guru Plug eliminates the use of antifreeze and the complications that arise from its use. Antifreeze is a toxic chemical that relies on hazardous chemicals to prevent coolant from freezing which can pollute ground, surface, and drinking water if dumped, spilled or leaked, and is harmful to marine and aquatic life. Antifreeze can also easily become contaminated with lead or fuel from the locomotive engine, necessitating its handling as a hazardous waste and the associated costs to dispose of it properly.

For locomotive operators that already rely on the Guru Plug to keep their locomotives freeze-free all winter, ThermOmegaTech offers the Guru rebuild programme to make routine maintenance easier, greener, and less costly.

To prevent the upward creep of nuisance dumping inherent with thermostatic valve technology, ThermOmegaTech recommends replacing the Guru Plug every 18-24 months. The rebuild programme simplifies this bi-annual process by allowing the return of old Guru Plugs for cleaning, refurbishment, and retesting before being returned to the customer at a significantly reduced cost.