Intercités: will Cinderella go to the ball?

Long considered the poor relation of TGV, France’s network of conventional long-distance trains is going through significant structural change with the aim of boosting service quality and strengthening financial performance. Keith Barrow assesses whether the current round of reform and investment will be enough to revive the fortunes of the Intercités brand. 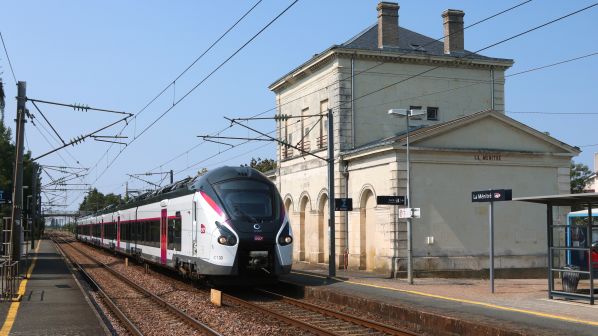 NEARLY 40 years after TGV began chipping away its most profitable routes, France’s residual network of conventional long-distance services has arrived at a crossroads. Lacking the commercial potential of TGV and the regional stewardship of TER, Intercités grew to become a thorn in the side of French National Railways (SNCF) and a conundrum for the French government, which sought to ensure that towns away from the high-speed network retained their long-distance connections.

In December 2010, the French government signed an agreement with SNCF which aimed to reverse the decline of the so-called balance of territory (TET) trains, a network of 40 loss-making long- distance services serving 355 towns across the country. However, losses continued to mount and service cuts continued.

One seemingly successful response has been to ask regions to take over TET services in return for state funding for new trains. In April 2016 Normandy agreed to take on five Intercités routes (Paris - Caen - Cherbourg, Trouville - Deauville, Paris - Rouen - Le Harve, Paris - Granville, Paris - Evreux - Serquigny, and Caen - Le Mans - Tours) in return for a €720m state investment in new rolling stock for these services.
A €585m order was duly placed with Bombardier in October 2016 for 40 Omneo Premium double-deck inter-city EMUs, the first of which is due to enter service in December.

The neighbouring region of Hauts-de-France agreed in December 2016 to take on TET services and became the organising authority for Paris - Amiens - Boulogne and Paris - St Quentin - Maubeuge/Cambrai Intercités services with effect from January 1 2019. The deal came with €400m in state funding for new rolling stock, including 10 Alstom Coradia Liner EMUs worth €150m. In June 2018 the French Agency for Transport Infrastructure Financing (AFTIF) approved the remaining €250m in state funding.

In July 2016 the government signed a four-year agreement with SNCF for the continued operation of TET routes, most of which would transfer to regional control by the end of the contract term in 2020. It also committed to providing regions taking on TET services with €1.5bn for new rolling stock and pledged to spend a further €1bn by 2025 on new trains for routes remaining under state control. However, the new agreement spelt the end for all-but-two of the Intercités de Nuit overnight trains, and an attempt to find new operators for these services ultimately proved fruitless.

Under legislation on the reform of SNCF, which was approved by the Senate in June 2018, the state became the organising authority for all TET routes not transferred to regional control. In addition to the Paris - Briançon and Paris - Rodez/Latour-de-Carol overnight services, just six TET lines will still be state controlled after 2020. These include:

In January, the government published a prior information notice for the competitive tendering of Nantes - Bordeaux and Nantes - Lyon services. In doing so, the national government became the first organising authority for rail services in France to formally engage in the process of market opening, although several regions are not far behind. An invitation to tender will be issued in early 2020 with the new contract due to start in 2022.

Currently only three inter-city train pairs operate on each of the two routes daily, attracting fewer than a million passengers a year but requiring a public subsidy of more than €25m.

Both lines have recently benefitted from the introduction of new rolling stock in the form of Alstom Coradia Liner bi-mode multiple units. These six-car trains were financed by the government and will be made available to the successful bidder. SNCF has already confirmed it intends to bid.

Further competitive tendering of state-controlled TET routes appears unlikely in the medium-term. Transport minister, Mrs Elisabeth Borne, said last month that the state will retain responsibility for the residual Intercités long-distance network, despite a call from the Court of Auditors to transfer services to regional control.

According to the court’s 2019 Annual Public Report, which was published last month, state compensation for operating deficits is expected to fall slightly to €52.3m annually from 2023. Of the six routes remaining under state control, Paris - Clermont-Ferrand, Paris - Limoges - Toulouse and Bordeaux - Marseilles are deemed to be closest to “financial equilibrium.”

These lines accounted for 75% of passenger-km on the residual state-controlled Intercités network in 2017 but only 53% of losses. In contrast, the Nantes - Lyon, Nantes - Bordeaux and Toulouse - Hendaye services accounted for 10% of passenger-km but incurred 24% of losses.
The residual Intercités network will be a marginal business for SNCF Mobility, accounting for only 3% of traffic by passenger-km, compared with 6.5% today, with no routes north of Paris.

According to the report, the Intercités business is facing a significant need for investment in rolling stock, as outlined in the court’s 2015 investigation into the finances of the TET network, which fed into the 2016 agreement between the state and SNCF. Rolling stock used on the residual network will be life-expired by 2025 and the average age of the fleet was already 36 years at the end of 2016. The report says the diversity of stock used on these routes is also impacting fleet reliability and maintenance costs.

The July 2015 report put the cost of replacing the entire TET fleet at €3.5bn including €2bn for lines transferred to regional control and €1.5bn for the residual network. Between 2013 and 2017, the state ordered 64 trains at a cost of nearly €800m to replace the oldest trains and support the transfer of services to the regions. In addition to these purchases, the state has also allocated up to €1.45bn for the acquisition of new trains for Intercités services transferred to Hauts-de-France, Normandy and Centre-Val de Loire.

Tenders were launched in June 2017 for new trains for the residual network, and a contract is due to be signed this year with deliveries scheduled to take pace in 2023-2025. The government has allocated €800m for 28 trains for Paris - Clermont-Ferrand and Paris - Toulouse services (including a new depot in Paris). In a second conditional phase, the Bordeaux - Marseille fleet will be replaced with new trains at a cost of around €400m. Unlike the procurements between 2013 and 2017, which aimed to achieve a degree of commonality with existing regional trains, the tender for these routes specifies a 200km/h train designed specifically for long-distance operation, with a high level of comfort and onboard service.

In the meantime, €113m is being invested in life extension of the current fleet between 2016 and 2020 with improvements such as passenger Wi-Fi. In September 2018 Borne also announced a €30m investment in the modernisation of rolling stock used on the remaining overnight services.

The auditor notes in its latest report that the regions are already working to improve the financial position of services they have taken over. Grand Est has revised Intercités services on the Paris - Troyes - Belfort line to align them more closely with regional services and optimise the use of new rolling stock, reducing the projected deficit to €20m a year, compared with €30m when it took over the services from SNCF in 2018.

The report highlights governance as an ongoing concern facing Intercités routes remaining under state control and the desirability of retaining a handful of lines after most have passed to the regions. It describes the financial relationship between the state and SNCF as “unbalanced,” despite the signing of a four-year agreement in 2016 which aimed to provide a degree of financial stability for TET.

The report identifies competition both from within SNCF Mobility (TGV, Ouigo, Ouibus) and externally (long-distance buses, carpooling) as growing threats to the long-term sustainability of Intercités services. This is being countered with a redefined pricing policy, which seeks to increase load factors on off-peak trains, as well as improving the market visibility of Intercités and developing onboard services which differentiate the train from competing modes.

A report published on February 8 by FNAUT claims that public subsidies for long-distance bus services have filled gaps in the public transport network but have simultaneously weakened the financial equilibrium of passenger rail by competing directly with TGV and Intercités services, forcing SNCF to lower fares. However, the report also argues that SNCF Mobility can strengthen its competitive position against long-distance buses by improving links between French regions instead of focussing its efforts on radial routes from Paris.

The report also suggests SNCF should look to emulate the “spectacular example” of Renfe, which significantly increased ridership through an 11% reduction in fares, with the gain in custom offsetting unit revenue loss.

The Court of Auditors stresses the need to tackle the “persistent fragility” of the residual network, which still suffers from many of the structural weaknesses identified in the 2015 report. Those routes remaining under state control serve very different markets with diverse needs. Some of these services could become self-sustaining in the medium-term, but others may never be profitable. The refurbishment of the ageing Intercités de Nuit fleet should prepare these vehicles for up to another decade of service, but a decision will need to be made in the 2020s on whether the market for overnight trains in France justifies a hefty investment in new rolling stock.

The second weakness identified by the auditor concerns service quality. “Service optimisation and revitalisation efforts will only be fully effective with improvements in passenger comfort and the punctuality and reliability of Intercités,” the report states. “This recovery assumes that the investments announced in rolling stock will be made.”

The third weakness is governance. The report highlights a need to “define a real strategy” for the residual lines while continuing the drive to reduce costs and improve productivity with the aim of reducing the burden on the taxpayer and ensure services are sufficiently robust to cope with the arrival of open-access rail operators.

The auditor argues that the state is ill-equipped to fulfil the role of organising authority for Intercités, primarily because of the difficulty it faces in establishing a balanced contractual relationship with the operator. The auditor’s report therefore recommends reviewing the future economic model for the residual network and transferring more routes to regional control, an option immediately rejected by the government.

The future for what remains of the TET network arguably looks better now than it has for many years. Devolution of responsibilities to the regions, the procurement of new rolling stock, competitive tendering, the government’s commitment to shift the balance of investment from high-speed lines to the conventional network, and the reform of SNCF all represent steps towards a stronger Intercités offer. However, concerns around funding and governance must be addressed if France is to ensure the long-term stability of long-distance rail links between regional centres.