China’s achievement in building world-class highway, railway and waterway networks on an unprecedented scale has been truly remarkable. Unfortunately, the networks have been built in insolation and, as Gordon Feller reports, this is impeding the development of intermodal freight. 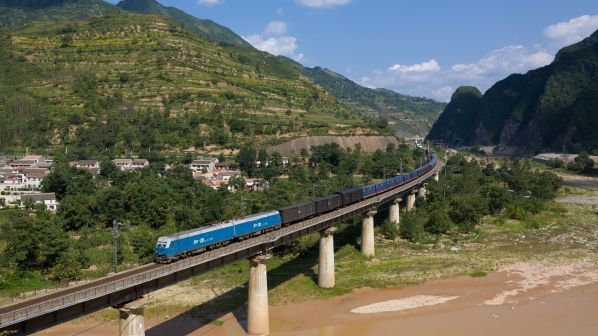 IN the last 20 years China has built the world’s largest high-speed rail network, which should reach 30,000km this year, and is continuing to expand its entire rail network to reach 150,000km next year. Since the mid-1980s China has constructed a 142,500km national trunk highway network, which surpassed the US inter-state highway network in 2011 as the largest in the world. China also has the world’s largest waterway network, with around 125,000km of navigable canals and rivers.

Despite the investment in railways and waterways, 76% of freight in China moves by road, which the government now realises is much more carbon intensive than using rail or water.

A major impediment to shifting freight from road to rail and water is the lack of efficient freight hubs to facilitate seamless intermodal transport between sea and rail, waterway and rail, and rail and road. In addition, operational rules and documentation are not standardised, while institutional barriers impede communication between the three modes, exacerbated by a lack of incentives to work across modes.

Another problem is that information about intermodal transport is fragmented and not shared among various stakeholders such as freight shippers, logistics services providers, freight forwarders, infrastructure managers and operators.

The government says it needs to focus significant financial resources on tackling the key challenges and the major bottlenecks facing intermodal freight transport.

As part of the Belt and Road and Yangtze River Economic Belt initiatives, China identified a number of national and international freight and logistics corridors. However, these plans are rudimentary, and detailed development and investment plans need to be produced based on a review of the existing infrastructure, a detailed survey of commodity flows, and a better understanding of the major impediments regarding policy, regulations, infrastructure and operations. In addition, the new freight corridors need to support a more efficient and green freight transport and logistics system.

A new World Bank programme is focused on developing policies, strategies and standards in China to improve the efficiency and environmental sustainability of the freight transport sector, with pilot projects in five cities and provinces. The programme has several key elements:

China has one of the most freight-intensive economies in the world. In 2016, total freight volume in China was 43 billion tonnes and 18 trillion tonne-km, which is around 2.5 times the total tonnage in the United States and double the tonne-km. Freight volumes are forecast to grow at an annual rate of 7 to 8% during the 13th five-year plan.

However, in order to maintain healthy economic growth, while fulfilling its commitment to global carbon reduction and environmental sustainability, China needs to develop a cost competitive, efficient and green freight transport system as a national priority. There is an urgent need for a national freight flow model to support data-informed policy analysis and decision making.

While cities have taken steps to promote public transport and discourage the use of cars, relatively little has been done to facilitate the flow of goods in urban areas.

Last-mile urban distribution is also inefficient. With the expected growth in domestic consumption, urban freight demand is increasing rapidly. Last-mile unit costs are around twice those of long-haul transport because of the high cost of disaggregating shipments for delivery and the effects of congestion.

According to an OECD report, urban freight accounts for 10-15% of total traffic in developed countries, while contributing to 40-50% of traffic-related pollution in cities. While cities have taken steps to promote public transport and discourage the use of cars, relatively little has been done to facilitate the flow of goods in urban areas and to reduce the adverse impacts of urban freight transport.

To improve urban distribution efficiency, coordinated efforts are required from both the public and private sectors. For example, some urban logistics companies are developing offsite consolidation centres for joint distribution. Freight transport planning should be integrated into the urban transport planning and traffic management process, which is currently focussed solely on passenger transport.

For example, infrastructure should be used more efficiently on a 24-hour basis. Freight loading and unloading zones need to be carefully planned and strictly enforced, while freight delivery routes should be designated.

China is now the largest e-commerce market in the world and is continuing to grow, driven by fast-moving consumer goods. In 2017, online retail sales in China totalled Yuan 1.149 trillion ($US 167bn), an increase of 32% from Yuan 869bn in 2016. Parcel deliveries are expected to more than double from 41.7 billion in 2017 to 92 billion in 2020. To cope with this, a rapid expansion in warehousing space is envisaged, as well as higher demand for less-than-truckload operation. Online retail giants are already investing in logistics, including warehousing, haulage and last-mile delivery solutions. Efficient logistics depends on speed, predictability and cost which will challenge the existing transport system.

Although heavy lorries account for 10% of the road vehicle fleet, they consume about 50% of road fuel. The Chinese road haulage industry is characterised by many small companies owning fewer than 10 vehicles. Lorries with poor facilities and illegal modifications are not closely regulated, while many old vehicles are still in operation.

Freight operators are gradually introducing new concepts, such as big data, Internet of Things, and blockchain into logistics services. However, most of the information is fragmented and owned by individual companies. The public sector therefore has an important role to play in creating an open platform with standardised protocols, so that information can be shared. Once information is made available, a logistics credit system could be established for logistics companies, individuals and intermediaries.

While the private sector is harnessing the latest technologies, the public sector is lagging behind in the development of policies aimed at improving freight efficiency and introducing regulations that mitigate the externalities of freight transport.