The fourth part of IRJ's preview of this month's exhibition at Messe Berlin. 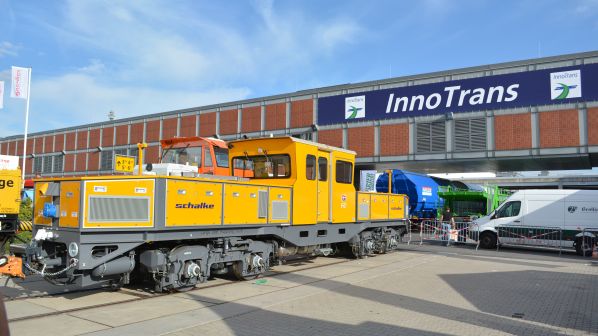 After a four-year hiatus, the railway world will again descend on Messe Berlin for the 13th iteration of the InnoTrans trade fair.

IRJ's Editorial Team reveals what the leading exhibitors will present at InnoTrans 2022 in Berlin from September 20-23. We have split the article alphabetically across four separate posts. In this final part we include companies from R-Z . Part one (A-E) is available here, part two (F-K) here, and part three (L-P) here.

Rail Vision (Hall 9, stand 455) will showcase its driver assistance system which harnesses AI and advanced electro-optical sensor technologies, and which can identify and categorise obstacles on or near the track. The supplier is working with Hitachi Rail to equip the AutoHaul system used by Rio Tinto in Australia following successful tests at Hitachi’s test track in Naples.

The exhibitor will also show the Romill Urban E³ milling train, which is optimised for use on underground lines. The machine is equipped with hybrid drive and milling technology from Schweerbau International (Track Area O3/90/95) and measuring equipment from Vogel & Plötscher. On the Robel stand, Vogel & Plötscher will exhibit its Rail Surface Crack Measurement (RSCM) device for measuring crack depths and irregularities in the rail surface. New company Plasser Robel Services will present its multi-brand service programme for rail vehicles, and the latest addition to the group, Robel Rail Automation, will present studies on the automation of labour-intensive manual maintenance tasks.

SAB Bröckskes Special Cables (Hall 14.1, stand 210) will display the new SAB RailLine 560 cable, which the supplier says, with the help of the latest materials, is continuously flexible, halogen-free, and possesses the highest level of flame protection as well as non-toxic characteristics. The cable is able to withstand a range of weather conditions during outdoor use and at the same time has good ozone, UV, oil and fuel resistance. It is also resistant against mechanical stress.

Outside Siemens Mobility (Hall 27, stand 230 and Track Areas 04/36, 06/40, 50, 60, 07/40, 50, 70) will show seven vehicles: the Mireo Plus H hydrogen multiple unit (p38), a Desiro HC, a Vectron Dual Mode locomotive and a 230km/h Vectron Multi System, along with a four-car Siemens Avenio LRV and an X-Wagen automated metro train for Vienna. Highlights of the inside exhibit include the launch of its open digital business platform, Siemens Xcelerator.

Clean, smart, safe and accurate is the theme of the Speno (Hall 26, stand 120) exhibit. The supplier will present its track cleaning machines, which employ a specialised technique to recover debris and metal shavings from the grinding process. Speno will also highlight its solutions to identify the most appropriate grinding patterns and to self-diagnose potential faults; and technology to help operators avoid any interference between grinding equipment and trackside devices such as axle-counters and hot box detectors. Other highlights include real-time monitoring equipment for track conditions.

For the first time Stadler (Hall 2.2, stand 160 for main stand; Hall hub 27, stand 750 for signalling) will have a separate stand dedicated to its signalling portfolio, including ATO, ETCS, CBTC and railway safety systems.

In addition, the supplier will present seven new rail vehicles at the outside track area: the Hydrogen Flirt H2 multiple-unit for the San Bernadino County Transportation Authority in the United States; a two-car battery Flirt for the NAH.SH network in Schleswig-Holstein, Germany; a Tina LRV for the Heag Mobilo transport company in the Darmstadt-Dieburg district of Germany; and a new Euro 9000 locomotive for European Loc Pool (ELP) in Switzerland. There will also be three trains for the British market: a Flirt tri-mode train for Transport for Wales (TfW); a Citylink tram-train for TfW; and a battery-electric EMU for Merseyrail.

Infrastructure construction, renewal and maintenance company Strukton Rail (Hall 25, stand 285) will present “Leonardo,” a form of Google Street View for railway lines. Strukton will also show its robot for monitoring crane track systems and automatic rail structures. In addition, it will demonstrate an exoskeleton with an incorporated safety harness for working on overhead wires, which it has developed alongside the TU Delft Robotics Institute. Company representatives will also be on hand to demonstrate the HoloLens augmented reality application for training and instruction.

Visitors to the Thales (Hall 27, stand 570) exhibit will be met by a digital wall, which will showcase projects the company has worked on around the world. Visitors can also test the latest generation of Thales’ digital integrated platform to supervise all wayside and onboard subsystems with a single click, as well as platforms for revenue collection and sharing. Thales will also showcase its latest digital train control and smart maintenance technology, as well as its end-to-end cybersecurity products. Outside, visitors can also board Lucy, Thales’ ERTMS test train (Track Area T04/29).

Among the latest products on show at the Voith (Hall 1.2, stand 130) exhibit is the CargoFlex Digital Automatic Coupler (DAC) (pictured).

Based on the Scharfenberg design, the coupler has already demonstrated high reliability in winter tests under extreme climate conditions in Sweden, in the Swiss mountains and in the climate chamber of DB Cargo in Minden. Voith will also show its MultiMode gear units for passenger rolling stock. The supplier says the transverse drives combine the advantages of modularised and parameterised products, ensuring speedy delivery and high level of gear unit availability.

Vollert (Hall 21, stand 160) will showcase its battery-powered shunting solutions, including the road-rail robot Vlex. Vollert has supplied the model to Fret SNCF’s maintenance site in Modane.

The compact road-rail robot shunts locomotives weighing up to 120 tonnes into the site’s 14 maintenance areas and is able to withstand the mountain region’s harsh weather conditions. Vollert will also present in a live demo the new IIoT service module, which offers virtual monitoring of shunting operations to allow resolution of errors as they arise.

Vossloh (Hall 26, stand 975) is focusing its exhibit around three key themes: advanced infrastructure, future turnout environment, and smart maintenance. The supplier says it is focusing on tailored solutions that improve the durability and resilience of track infrastructure to increasing demand. The supplier will show its range of products, tools and services as well as its digital offering.

VTG (Hall 6.2, stand 410) subsidiary Waggonwerk Brühl is a provider of wagon repair and maintenance services at its main facility in Wesseling near Cologne, and satellite workshops at Syke near Bremen and Schwarzheide near Dresden. At InnoTrans the service provider will bring its offer to life by demonstrating its wagon repair workshop to visitors through VR.

Wabtec (Hall 1.2, stand 210) will highlight products to decarbonise the rail industry, including FLXdrive, the world’s first 100% battery-powered heavy-haul locomotive. The company will also showcase its latest signalling and digital solutions. Also featured will be the latest Wabtec braking technologies such as DistanceMaster, Green Friction and Regioflex, as well as products to transform the commuter experience with HVAC solutions such as Green Air and Bluefilter, along with passenger information systems such as the iSmart Displays.

Modular in design and compatible with new and existing rail vehicles, [email protected]’s functions range from wireless component identification to monitoring of flat spots, wheel tread wear, track and driveline components. In addition, ZF experts will give a presentation on connectivity solutions to partners and customers at the stand on September 22 at 16.00.

Zonegreen (Hall 2.2, stand 230) will present its technology designed to automate depot safety procedures, removing manual processes and the risk of human error while allowing the effective movement of vehicles. Among the highlights are demonstrations of Depot Personal Protection System (DPPS), which safeguards workers by using Network Rail-approved powered derailers, linked to road end panels that control vehicle movements. Staff log on via RFID tags that record where they are working, with access permission for trains only granted if the route is clear. Zonegreen systems embody the concept of distributed intelligence, meaning there is no master controller or single point failures.