The second part of IRJ's review of InnoTrans at Messe Berlin. 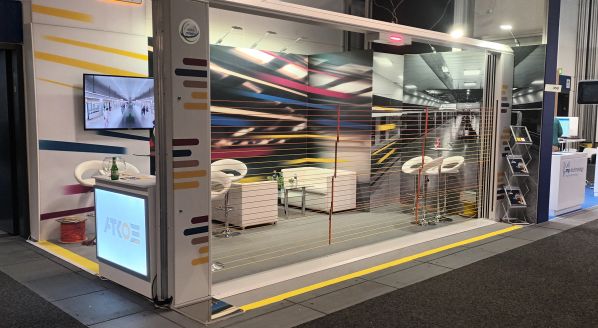 IRJ's Editorial Team review the highlights from InnoTrans 2022 in Berlin in September. We have split the article across four separate posts. Part one is available here, part three here, and part four here.

ATVO Trade, Bulgaria, displayed a working rope platform screen door system at InnoTrans. The system, which was developed by SKD HiTec, Korea, has been demonstrated at four stations in Korea, Japan and Sweden, and since 2020 has been installed at 12 stations on lines 1 and 4 of the Sofia metro.

Sofia Metro suffered from an overcrowding problem on lines 1 and 4, which operate over the same tracks through the city centre, when football matches ended at Vasil Levski stadium. The metro was keen to install platform screen doors at Vasil Levski station to improve safety and crowd control but could not afford the cost of doing so.

The rope system offers an affordable alternative. It operates vertically and is available in spans which are 2.7m high and can be supplied in widths of between 8 and 12m between the support posts. The wire-tensioned rope barriers comprise four overlapping sections which have a maximum height of 1.7m when lowered. A 20m-wide double span weighs 640kg. The barriers can be raised or lowered in 3 to 4.5 seconds. The coated ropes are flame retardant, do not burn and are unaffected by the strong air flow when a train enters the station.

The wide width of the rope screen doors means that they can cope with different train lengths and door positions, and do not require trains to stop with high precision and so can be installed on lines with manually driven trains.

Work is underway to secure SIL4 certification while continuous RAMS analysis at Sofia Metro has shown a 99.99% reliability rate.

THE Europe’s Rail Joint Undertaking launched its Call for Proposals 2022-2 in the presence of the European commissioner for transport, Ms Adina Vălean, on September 20. Submissions will be accepted until December 14.

Europe’s Rail intends to use the call to build a network within the rail scientific and research community, including the funding of PhD programmes. Europe’s Rail says this will strengthen, expand and optimise rail research and innovation capabilities by sharing world-class national facilities in Europe to contribute to Europe’s Rail or other funded multi-national programmes.

Europe’s Rail says that all activities launched during 2022 will be operational and start delivering results from 2023.

Škoda is building 31 30m-long tram-trains, 37 40m-long and 12 60m-long vehicles. The two longer versions are designed to split in half for maintenance. The fleet has smart data functionality for predictive maintenance.

Five of the short units are equipped for catenary-free operation along a 1.5km section in Heidelberg, while all the vehicles can operate catenary-free for up to 800m in an emergency and for shunting in the depot. The fleet is also designed so that the full modular battery pack can be installed for extended catenary-free operation. A 60m vehicle can be converted into two 30m units by adding new cabs.

The T36 has 100% recuperation of braking energy using supercapacitors. Its bogies are fitted with highly resilient wheels to improve the ride quality.

STADLER presented the first of seven Independently Powered EMUs (IPEMUs) that it is building for British commuter operator Merseyrail as part of an order for 53 four-car class 777 EMUs which are due to enter service from November.

The new articulated fleet has been purchased by the Liverpool City Region Combined Authority, whose transport arm Merseytravel manages the 25-year Merseyrail operating concession, held by Serco and Abellio.

The seven IPEMUs are equipped with batteries for operation on non-electrified lines, which can be charged when operating on Merseyrail’s 750V dc third rail network and during regenerative braking.
In the depot, batteries can be charged in 15 minutes to provide sufficient current to operate for 50km at speeds of up to 100km/h compared with 120km/h in third rail mode. The batteries are capable of more than 10,000 charge/discharge cycles.

Each IPEMU has 184 seats, space for 302 standing passengers and at-seat charging points for mobile devices. Retractable ramps below the passenger doors provide level boarding at all stations.

The first IPEMUs are expected to enter service early next year, to serve a new station at Headbolt Lane on the Kirkby - Wigan Wallgate line, beyond the current limit of third rail electrification at Kirkby where passengers to and from Liverpool are currently obliged to change trains.

AT the Europe’s Rail stand, AZD Praha, Thales and Kontron hosted a live demonstration of ATO, with Europe’s Rail executive director, Mr Carlo Borghini, given the honour of using a tablet in Berlin to dispatch a train located in the Czech Republic.

The train, which operated with a driver onboard to maintain safety, started and ran automatically, before detecting a car that had been placed on a level crossing and stopping itself. The demonstration also showed the ability to run ATO over GSM-R as well as other communication systems. “This is an example of the former Shift2Rail members working together,” Borghini says.

POLISH manufacturer Pesa unveiled its H2 hydrogen-powered shunting locomotive for the first-time outside of Poland at InnoTrans. The locomotive has a 650kW power output and can operate for 15 hours before requiring refuelling. The certification process for use in Europe is now underway.

Pesa CEO and president, Mr Kryzstof Zdziarski, said that while the locomotive was still a prototype when it was unveiled in Gdansk a year ago, it is now a fully-fledged product that is ready for the market.

During the unveiling ceremony, Pesa and Polish fuel refiner Orlen signed a cooperation agreement that will enable the locomotive to be sold as a package with a hydrogen refuelling station, which was also unveiled during the event. Orlen will supply the hydrogen for customers within Europe where possible.

Speaking to IRJ following the unveiling, Zdziarski said there were orders for around 20 locomotives in the pipeline, but these had not yet been signed as Pesa was still working on the price point for the locomotive while customers are exploring potential subsidies to support purchase costs.

Zdziarski says that instead of the complete replacement of a fleet of 20 diesel locomotives at a large port or yard, it is more likely that operators will purchase one or two locomotives with alternative traction to reap some of the tax breaks or benefits, while waiting for the technology to mature before replacing the rest of the fleet. However, he says this process is likely to accelerate if authorities continue to introduce measures that force companies to pay for the emissions they produce.

The trains can operate under catenary or battery traction, and are also equipped with regenerative braking, which Infrabel says will reduce emissions by 130 tonnes of CO₂ per train per year. The trains will be delivered in 2024, 2026 and 2027.

TESTING is underway in Ulsan, Korea, of Hyundai Rotem’s prototype hydrogen LRV. The company says a production model will be running in passenger service by the end of 2023.

Mr Jeong Hoon-Kim, vice-president for rail solutions, told delegates at InnoTrans on September 20 that the hydrogen fuel cell technology is the same as used on the company’s Nexo cars, Xcient trucks and Universe buses. The LRVs are equipped with four 95kW hydrogen fuel cells, two of which are located in each of the two fuel cell boxes on the roof of the LRV. Six 750-bar hydrogen storage tanks and the lithium-ion batteries are also located on the roof while the vehicle is equipped with an integrated cooling device.

Tests are taking place on disused tracks in Ulsan and are considering optimal driving patterns for the vehicle to maximise fuel efficiency.

An interesting feature of the new LRV is the production of clean air. As part of the electrolysis process, 107.6kg of oxygen is produced, equivalent to that used by 170 adults. 10 hydrogen LRVs can also purify the dust emitted by 40 cars, according to the manufacturer.

The company is planning to scale up the technology for use in a multiple-unit, locomotive and high-speed train. Work on these concepts will begin in 2024 with the results expected by 2030. Korean Railroad Research Institute (KRRI) is already working on a hydrogen locomotive, which can operate at up to 150km/h and has a range of at least 1000km.

Hyundai Rotem also presented details of its planned green hydrogen production facility and wider liquefied hydrogen infrastructure. On September 30, the company participated in an announcement for the Jeju Green Hydrogen Global Hub Construction plan under which Jeju Island plans to spend Won 62.3bn ($US 43.1m) to develop and install the technology to produce 2.7 tonnes of green hydrogen every day.

KRRI says rapid and smooth refuelling will be key to the success of hydrogen-powered rolling stock and the refuelling station comprises a high-pressure (41.3MPa) hydrogen compressor, a hydrogen storage container with a working pressure of 50MPa, and a charger designed to refuel vehicles at a pressure of 35MPa.

There is no set standard for building hydrogen refuelling facilities for railway vehicles in Korea so a draft safety standard had to be developed using a regulatory sandbox that will allow hydrogen to be used under certain conditions. The intention is that in the future a technical standard will be established for the railway sector through collection and analysis of empirical data. A safety management committee has been formed with experts from industry, academia and related institutions for this purpose.

Schalke modular locomotive: Schalke is meeting the needs of the Indonesian mining sector with the MMT-M-270-BDE modular locomotive. The electric unit is equipped with a pantograph as well as a battery that can be exchanged for a diesel-electric traction package in an hour.

To swap the power-packs, the roof is lifted off, the original power pack is unclipped and three plugs are removed to enable the removal of the pack, which is replaced by a new pack. The auxiliary power system supports operation during power outages, or in parts of the mine that have not been equipped with catenary. Each wheelset is driven by a 135kW ac electric traction motor, while liquid-cooled IGBT-controlled traction converters make it possible to control each wheelset individually.