A new concession contract starting in 2026 sets targets for one of Brazil’s busiest freight railways to invest Reais 31bn and increase intermodal volumes by a factor of seven, as Renata Passos explains. IRJ’s editorial team also profiles the rail projects to watch in South and Central America over the next 12 months. 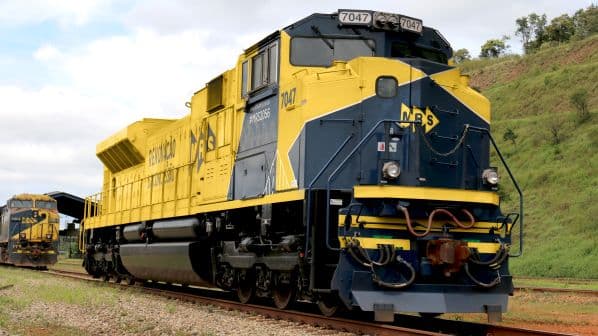 MRS is aiming to double its current freight volumes under the new 30-year concession.

Brazil’s Ministry of Infrastructure (MInfra) received in late 2022 48 applications from 22 private companies to build a total of 15,013km of new freight railway representing a total investment of Reais 186.94bn. MInfra says that the federal government has so far authorised nine projects, representing investment of Reais 50.3bn to build 3506.79 km of new railway. A further eight applications have already been approved by the National Agency for Ground Transport (ANTT) and are awaiting a final decision by the National Secretariat for Ground Transport (SNTT).

Work is due to start on January 20 on a project to rebuild Guatemala’s defunct 914mm-gauge railway as a standard gauge network. The objective is to serve the country’s Caribbean and Pacific ports and to connect with the North American rail network via Mexico. New lines will be built to the borders with El Salvador and Honduras. The project is being developed and financed by a private company called Remed.

MRS Logistics is already considered to be one of Brazil’s most productive railways, operating 6% of the national network but carrying around one-third of total freight traffic and almost 20% of all Brazilian exports. In 2021 the company carried 170 million tonnes of freight, up 6.4% on 159.8 million tonnes the year before; of this, 62.8 million tonnes was general freight including agricultural commodities, steel products, cellulose and containers.

General freight was 1.9% up year-on-year in 2021, and MRS Logistics now has the target to double this under its new 30-year concession to operate its network in the states of Minas Gerais, Rio de Janeiro and São Paulo which starts in November 2026. The first concession saw the company invest and grow from a 1167km network with a fleet of 401 locomotives and 11,000 wagons to 1643km today with over 770 locomotives and almost 19,000 wagons.

The new concession agreement running until 2056 was signed in July with the Ministry of Infrastructure. It includes investment of Reais 31bn ($US 5.8bn) which MRS says will help to improve productivity and diversify its traffic mix and is based on three pillars: capacity expansion and compliance with performance parameters, investment in the public interest, and work to minimise the impact of rail operations in urban areas.

Investment of Reais 11bn in the railway is already guaranteed. This comprises Reais 6.2bn for capacity expansion and performance improvements, including the construction and extension of yards, remodelling the permanent way and support facilities, and the acquisition of locomotives, wagons and equipment to support the growth in demand and the performance parameters set by the government. Another Reais 4.8bn has been earmarked for mandatory investment according to guidelines established by the Ministry of Infrastructure.

A further Reais 3.7bn has been allocated for projects deemed to be in the public interest, such as investment to improve urban transport, increase multi-modal transport and reduce logistics costs, such as the segregation of tracks that are currently shared with commuter operator São Paulo Metropolitan Trains Company (CPTM). An additional Reais 1.1bn will be spent on projects in urban areas to better segregate the railway from road traffic and improve safety, with the construction of viaducts, underpasses, footbridges and fences.

In addition to the new investment, MRS is obliged to pay 138 quarterly installments of Reais 14m which will be added to the existing quarterly payments for the right to run the concession until 2026.

According to MRS regulation specialist, Ms Beatriz Barroso, studies are underway to assess the quantity and deadline for the acquisition of rolling stock. “The investment in the fleet will be carried out in compliance with the contractual clause for the maximum age of the fleet, which is 40 years, and according to demand,” she says. “The objective is to guarantee compliance with the railway’s saturation index, which is 90%.”

The terminals will be located close to important federal highways in the region.

Barroso says that resources will be applied to enhance the integration of the southeast region. This will include investment in intermodal terminals to serve the metropolitan regions, provide connections to ports and making rail more competitive for moving general freight. An investment of Reais 645m is planned to build four major terminals.

MRS will build two terminals by 2024 in the city of São Paulo. At Mooca, Reais 274m will be invested in the 16ha terminal where there will be storage capacity for 2800 TEU, plus 6ha of warehousing and nine loading docks. In Lapa, Reais 108m will be invested to create a 9.4ha terminal with storage capacity for 2800 TEU and 6ha of warehousing space.

“The terminals will allow an increase in the volume of transported freight, mainly with a focus on the domestic market, with road support complementing the multimodal chain,” Barroso says. “The terminals will be located close to important federal highways in the region, which will allow greater integration. New products will be transported by rail, creating opportunities for logistic operations that are not economically viable today.”

MRS will also invest over Reais 305m in yards to handle its projected increases in freight traffic. In the south of the state of Rio de Janeiro, two new yards will be built at Resende and Barra do Piraí at a total cost of Reais 95.6m. In the Baixada Santista region of São Paulo state, where the major port of Santos is located, investment of around Reais 172m will create five new yards. In the Vale do Paraíba region, MRS will invest around Reais 7m to extend the yards at São José dos Campos and Jacareí to accommodate longer trains. A new yard is also planned in the municipality of Itaquaquecetuba at a cost of Reais 30.5m.

Investment in MRS network infrastructure will prioritise segregating the tracks used by CPTM commuter services from freight operations, which will be carried out in stages to minimise the impact. Completion is expected in 2034. Barroso says that the objective is to segregate 130km of the 140km shared by the two operators, which will also require some civil works, remodelling stations and resignalling. The project will also provide the right of way for the Trem Intercidades regional passenger service being developed by the São Paulo state government and the federal Ministry of Infrastructure.

To reduce the railway’s impact in urban areas and better segregate trains from road traffic, 30 viaducts, four underpasses and 12 footbridges will be built and 190km of railway fenced off. A total of 92 level crossings will be built.

To help MRS meet its growth targets, a major part of the investment programme will improve access to ports. In Rio de Janeiro, this will include 500m of new line to directly connect the MRS yard with the port. Involving the construction of 1.3km of new track, the yard at Herédia de Sá will also be reactivated.

In addition to expanding by more than 100% the capacity of rail access to the Port of Santos, including the extension and construction of yards to improve operations, MRS plans to modernise signalling and the Cremalheira substation, build a locomotive workshop and refurbish refuelling facilities.

“The objective is to enable the railway to meet projected rail transport demand and to increase operational safety,” Barroso says. In the wider public interest, the MRS programme will provide sufficient capacity for trains arriving at Santos on the Paulista network operated by Rumo, and will also be compatible with the projects contained in the investment plan for the internal railway network at the Port of Santos.

All in all, these projects and investments look set to further enhance MRS’ reputation for productivity as it enters the next stage of its development.

For detailed data on projects in South and Central America and around the world, subscribe to IRJ Pro.