IRJ’s editorial team profiles the rail projects to watch in North America over the next 12 months. 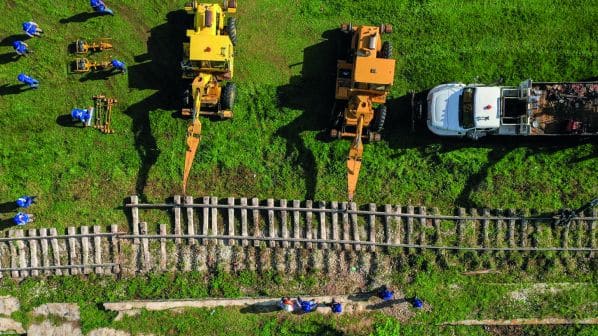 Due to environmental and archaeological reviews, construction of part of the Playa del Carmen to Tulum has been delayed.

The ambitious Mayan Train project is divided into seven sections and will run from Palenque to Escárcega and then in a loop around the Yucatán Peninsula serving Mérida and Cancún and numerous tourist sites. Construction is well advanced on the first four sections from Palenque to Cancún and the first train is due to be handed over on July 9 2023, with opening planned for late 2023. However, due to pending environmental and archaeological reviews, construction of part of the 110km Section 5 from Playa del Carmen to Tulum has been delayed. The 690km section from Mérida via Cancún to Chetumal Airport will be electrified.

Commissioning of the first section of the REM automated light metro is scheduled for spring 2023. The 16.6km line with five stations links the South Shore to Montreal and runs from Brossard to Central station. The project has been delayed by the Covid-19 pandemic, supply chain problems and the need to avoid opening the first section during the harsh Montreal winter. This will be followed by the Central station - Deux-Montagnes/Anse-à-l’Orme sections at the end of 2024. The opening schedule for the branch to Montreal Trudeau Airport is under review with the airport authority.

Brightline West says that it is hoping to begin construction this year on the long-planned 418.5km high-speed line from Las Vegas, Nevada, to southern California. Construction between Las Vegas and Victoriaville, California, has been approved, and the Federal Railroad Administration (FRA) has released an environmental assessment report for the 79km stretch through the Cajon Pass between the Victor Valley and Rancho Cucamonga. Brightline West expects to offer a journey time of approximately 2h 15min, operating at a top speed of 290km/h. This is more than twice as fast as the equivalent journey by road.

The underground Regional Connector project in the centre of Los Angeles will connect the L Line Gold, which currently serves East Los Angeles and Pasadena, with the A Line Blue and E Line Expo which currently terminate at 7th Street/Metro Center to allow through light rail operation between Long Beach, Pasadena and Azusa and from Santa Monica to Atlantic in East Los Angeles. The new line has three new stations in the city centre at Grand Avenue Arts/Bunker Hill, Historic Broadway and Little Tokyo/Arts District.

Trial running on the first section of Honolulu’s much-delayed elevated metro from East Kapolei to Aloha Stadium began on August 29 2022. Honolulu Authority for Rapid Transportation (Hart) expects to hand over the first section to Honolulu’s Department of Transportation Services (DTS) for the start of services early this year. Construction of the second section from Aloha Stadium to Middle Street is nearly complete and is expected to be handed over to DTS in early 2025. The city centre section, from Middle Street through downtown Honolulu to its temporary terminus at Civic Center, is expected to be completed by 2031.

For detailed data on rail projects in North America and around the world subscribe to IRJ Pro.