IRJ’s editorial team shines the spotlight on the first three winners of our inaugural Women in Rail Awards. 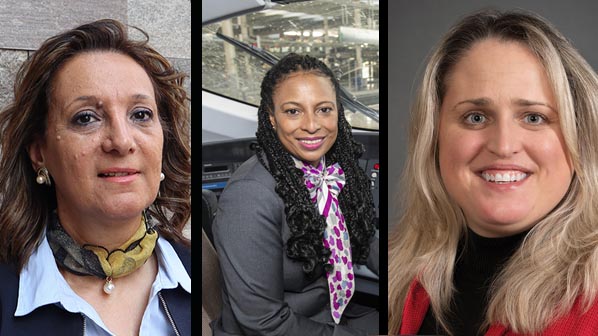 The first three winners of our inaugural Women in Rail Awards.

Yet employment diversity is an area where the railway industry typically lags behind, especially in its share of women versus men. The railway has traditionally been viewed as a dirty and dangerous working environment, which has reinforced gender stereotypes of what is considered suitable work for men and women.

Many railways and rail industry companies from around the world are working hard to shrug off this perception and present themselves as a more inclusive and positive place to work. For example, the Community of European Railways and Infrastructure Companies (CER) and the European Transport Workers Federation (ETF) signed the European Social Partner Agreement on Women in Rail in November, which aims to attract more women to work in the rail sector.

This is a story we have reported on before in IRJ. We have looked at policy and efforts to encourage women to join the sector, and written many times about the barriers to entry.

It was apparent from this reporting that more could be said of the women driving this change within their respective organisations: the engineering trail-blazers putting their male colleagues in the shadow; the leaders building effective teams and achieving remarkable results; the role models inspiring the next generation of women to join the railway industry. This is why we set up IRJ’s Women in Rail Awards, to tell these stories and to motivate others to follow in the footsteps of these women.

Each was nominated by a peer, many of whom went into extraordinary depth about their colleague’s achievements and the work they do. Much of this goes beyond what is expected in their paid position. Where we can, we have spoken to the women ourselves to get their own perspective on their career. We have asked them about their experiences of the rail sector, the challenges they have faced, how they have overcome them, and their hopes and expectations for the future. As one award recipient, Roberta Marchesi of ANP Trilhos, Brazil, remarked: “Being among the 12 women brings visibility and opens the way for the other women to appear and space for those who have not yet been seen.”

This is the first of four articles in this series, profiling the first three winners. Check back with railjournal.com over the next few days to see the remaining nine profiles.

We sincerely hope you enjoy reading the stories of the winners of IRJ’s inaugural Women in Rail Awards as much as we enjoyed putting them together.

RABAA De Laforcade says she has seen much improvement in diversity in the 28 years since she entered the construction industry, but thinks there is still work to be done.

An electrical engineer by profession, De Laforcade says she was initially interested in moving into the airport construction sector before an opportunity came about on the Cairo Metro project that allowed her to remain working with Colas Rail Egypt. She initially began working in the design department before moving up to become project director and finally operations director.

“It was very, very difficult in the beginning, in a male dominated culture in the Middle East,” she says. “It took a lot of hard work.”

De Laforcade is now looking to pass on that experience to others moving up through the sector and is known for operating an open-door policy to her office for everyone, but particularly for women.

“I try to prepare the young women with me, to teach them that they have to fight for it, but they will succeed,” she says. “It’s changing all over the world. In Egypt we see that you have more and more women in high positions such as ministers.”

Despite the success and hard-won wins, work still remains to be done and De Laforcade says a particular goal of her’s is to see a woman appointed as an site construction manager.

“The field of construction is not easy for ladies, especially on site,” she says. “There are a lot of women working in the offices, but not on site.”

“I try to prepare the young women with me, to teach them that they have to fight for it, but they will succeed.”

In order to pass on her knowledge and experience, De Laforcade says she spends much of her time listening and giving advice to other women, including holding a Women’s Day.

“It’s very important to listen and to talk, it helps in their work but also in their personalities,” she says. “It develops a good spirit between people.”

De Laforcade was nominated by Colas Rail - International CEO, Christophe Mansuy, who says women in the rail sector were not always recognised for their talent as senior managers.

“Rabaa is the kind of person to beat the odds, and despite the challenges she has always shown resilience in difficult times,” Mansuy says. “A very hard worker, she demonstrates enthusiasm and team spirit and made her way up through the organisation with everyone’s respect. We are proud and lucky to have her in our team.”

Mansuy also citied De Laforcade’s efforts to mentor young female colleagues “in an industry and a country not yet gender-balanced,” as well as her extensive knowledge and skills that are well appreciated by Colas Rail’s clients and partners.

“Rabaa is a role model for all Colas Rail Egypt employees,” Mansuy says. “She demonstrates outstanding generosity and rare humility, always giving credit to her team and to others. She also developed the ability to influence stakeholders. She stands firm on her position, provides endless support in difficult times and modestly smiles when celebrating success.”

AS the trainer of Saudi Arabia’s first female train drivers, Rosalina Reyes has surely secured her place in the history books. The group of 30 women aged between 22 and 30 were selected from 28,000 applicants, and according to Reyes, this response “illustrates the willingness of many Saudi women to join in the social and economic change that is taking place in the country.”

It is a story that has made headlines around the world. However, Reyes’ own career path has been no less remarkable, given that she only entered the railway industry when she moved from Cuba to Spain, armed with a degree in physics and a Master’s in optics and lasers. She trained as a driver with Renfe in Barcelona, one of only five women in a group of 75 trainees. “Thankfully, there are hundreds of female train drivers in Renfe today,” Reyes says.

She went on to drive commuter services, freight and high-speed trains between Madrid and León. In training other women to drive trains in Spain, she has worked to overcome the stereotypes associated with this profession, such as the need for physical strength.

“The creation of these jobs has shown women that they could do what was unthinkable in this country a few years ago: to get behind the controls of a high-speed train.”

Described as an exemplary student who helped lead the way for both female and male classmates in Barcelona, Reyes has fulfilled a personal ambition by joining Haramain High Speed Railway. To do so, she has had to overcome initial reluctance and doubt to become the first female trainer of both female and male drivers in Saudi Arabia. “All I needed to do was to get used to new infrastructure, a new train and new regulations, to respect the customs and traditions of the country and to do my job,” she says.

“The creation of these jobs has shown women that they could do what was unthinkable in this country a few years ago: to get behind the controls of a high-speed train.”

“I have never felt that being a woman has been an obstacle in my professional career,” she continues. “My best advice to women who are thinking of starting their professional career as train drivers is to be informed about the characteristics of this job. It requires a lot of responsibility, but it is also highly rewarding.”

DEBBIE Schrampfer is focused on meaningful change, and challenges everyone to embrace and move forward along the path of diversity, equality and inclusion.

Prior to taking up her current post in 2020, she founded UP’s LGBT employee resource group, Bridges, and was influential in creating an organisation that supports LGBT employees and increases awareness, understanding and empathy regarding LGBT issues.

As the first president of Bridges, Schrampfer was instrumental in influencing company-wide change at UP that included adding transgender healthcare benefits, extending domestic partner options in health insurance, and drove policy on anti-discrimination requirements in UP’s supplier and corporate giving programmes.

She is currently leading work to identify unintended barriers within the company, influencing senior managers to move more quickly, and to develop a diversity scorecard which will enable department heads to meet goals on gender and ethnic diversity, as well as supplier diversity.

Schrampfer is also deeply involved in creating understanding, dialogue and action at the individual level, mentoring employees at the start of their careers, and challenging executives to get personally involved in advocacy for women and ethnic minorities. Schrampfer is described as being fearless in tackling the difficult questions of race relations and unconscious bias. She “not only builds programmes, but also builds people.”