IRJ’s editorial team shines the spotlight on the next three winners of our inaugural Women in Rail Awards. 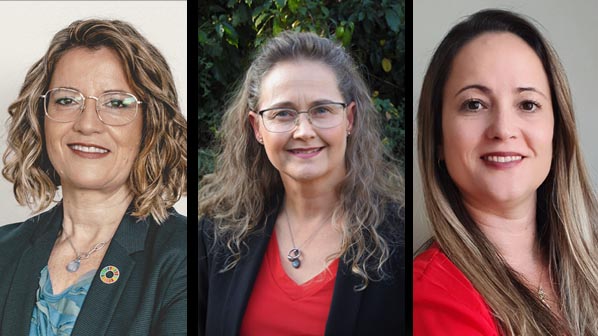 The second group of three winners of our inaugural Women in Rail Awards.

MARIA Luisa Domínguez’s ascent to become chairwoman of Spanish infrastructure manager Adif in 2021 was not by chance. “I had been drawn to trains since I was a young girl,” she says. “During my years at university I discovered many new aspects that drew me even more to this sector.”

During her more than 30-year career as a civil engineer, including 23 years at Adif, Dominguez has been at the forefront of the development of Spain’s now 3700km high-speed network.

In 2005, at the age of 36, she was appointed as projects deputy director responsible for the design of new high-speed lines and associated stations in Spain, managing an annual budget of €45m. She subsequently led the design of the Madrid - Zaragoza - Barcelona - French Border, Madrid - Valencia, and Córdoba - Málaga high-speed lines.

In May 2007, she was promoted to studies and projects director, leading a multidisciplinary team of 40 and managing a €400m budget. In 2018, she was appointed as strategic planning and projects managing director and joined the Adif board, before her appointment as chairwoman in 2021.

Dominguez praised those who have helped her along the way. “Throughout my career as projects director I faced challenging projects which really required the best of our team, not just from me,” she says. “I am extremely proud of the work our engineers and experts have been doing.”

“We need to celebrate that we are no longer missing the skills of 50% of our population.”

Dominguez says Adif is facing a period of transformation, with the liberalisation of high-speed services, the need to hire 6000 new staff over the next four years, and the challenge to digitalise the company.

With women only accounting for 16% of Adif’s staff, Dominguez says she is still often the only woman in the room and there is more work required to increase representation.

“That is why we are encouraging them with many different programmes that aim to attract them to STEM jobs, and we hope to be successful,” she says. “We need to celebrate that we are no longer missing the skills of 50% of our population.”

Indeed, Dominguez says her advice to other women considering a career in rail was to dare to try it. “Railways are fascinating and there are so many different areas they could find interesting: commercial, technical, PR, engineering, and innovation.”

ANNERI Robinson has been in the rail industry for 30 years, during which time she has coached and guided several young industrial engineers, including at a time when this discipline was new to the rail industry. Two female engineers that she mentored remain in the industry today after nearly three decades, one having been general manager at Transnet Freight Rail for many years, and who still today recognises that Robinson’s coaching and mentoring have been instrumental in helping her to achieve.

At Hatch, Robinson continues to mentor at least two industrial engineers each year, assisting with professional registration which has enabled several of her mentees to secure project management appointments on major projects. One such young engineer was awarded the Industrial Project of the Year in 2021 for his involvement in a large passenger rail audit, under Robinson’s guidance as project manager. In addition, she is mentoring three young female engineers under the SHeEngineers programme, established in a private capacity by a Hatch engineer who was mentored by Robinson.

Outside work, Robinson is active in social outreach programmes in the Guateng area, collecting and distributing clothing and organising the distribution of food to those in need during the Covid-19 pandemic, when she also started a virtual orchestra at Hatch which was highly successful in raising spirits and creating a platform for different cultures across the globe to get to know one another.

I think the rail industry chose me,” says Roberta Marchesi, who was speaking to IRJ’s Brazilian correspondent, Renata Passos. “I started my career working in infrastructure, in the area of ports and waterways.” She then moved to the public sector, monitoring government projects, when she received the invitation to set up ANPTrilhos, Brazil’s national association of passenger rail operators.

“Today I am passionate about the sector,” Marchesi says. “ANP Trilhos was created because there was no single association for passenger operators in Brazil. We managed to give the sector a voice.”

Marchesi’s work focuses on integrating Brazil’s passenger operators by offering a platform to exchange experiences and best practice for the mutual improvement of all operation in Brazil. An example highlighted by her nominator is the formation of a Covid working group, which resulted in a weekly follow-up bulletin to help Brazilian operators to understand the national scenario and the impact on passenger demand. She is also a successful fundraiser for rail and has played a key role in developing laws and regulations suited to the reality of passenger operation, and ensuring the interface between national operators and the Brazilian government.

“The rail sector in Brazil is already a minority. That’s why I decided to base my work on my work. Not my gender. I don’t want to be recognized for being a woman, but for being competent.”

Marchesi faces a challenge as often the only female in the room. All 20 members of ANP Trilhos are men, and all the directors of its member companies are male too. “But I am proud to say that everyone respects my opinion as executive director,” Marchesi says. “They welcome me as an equal.”

Outside the organisation, she finds the need to earn respect is a daily task. “These issues of prejudice are more visible at sector meetings, when I represent ANP Trilhos, and I am the only woman.” Marchesi points out “The rail sector in Brazil is already a minority. That’s why I decided to base my work on my work. Not my gender. I don’t want to be recognized for being a woman, but for being competent.”

Marchesi regularly seeks to recognise the role of women in the rail industry, and has engaged the sector in issues concerning female safety. She campaigned against introducing a female-only car on metro trains, arguing that this measure restricts the freedom of the victim rather than punishes the aggressor, and that women should be feel free and safe when using public transport.

Her hope is to encourage more women into the rail sector, where she says there is “fertile ground” for a career.

“My personal desire is to be able to see other women reach leadership positions in companies which are still dominated by men,” she says. “But I don’t just want it to be an opportunity for being a woman, but for competence. Diversity of management thinking is essential.”