IRJ’s editorial team shines the spotlight on the third group of winners of our inaugural Women in Rail Awards. 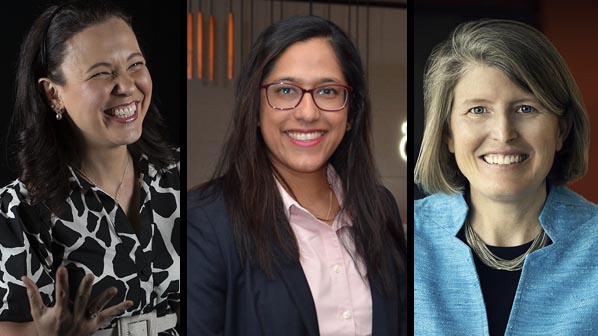 The third group of winners of our inaugural Women in Rail Awards.

She is a high achiever. Among a long list of accomplishments, Natasha was part of the project team that conceptualised the Kuala Lumpur - Singapore high-speed project in 2013 and that same year she helped to set up a branch of the Institution of Railway Signalling Engineers (IRSE) in Malaysia. She has organised various international exchange programmes to support railway knowledge building in Malaysia, including with Japan and Transport for London.

She also represented Malaysia in 2017 when negotiating the joint venture operating consortium for the rapid transit system that will operate between Johor Bahru and Woodlands North in Singapore, and organised a Mobile Learning Unit in a converted double-deck bus to promote the 192km Gemas - Johor Bahru double-track project on which YTL Construction is working.

These successes have landed Natasha recognition by the German government as one of its Remarkable Women in Transport in 2019, and as the inaugural winner of the Malaysian government’s Outstanding Woman of the Year in Rail Award in 2021.

Natasha is a passionate advocate of inclusion, especially creating opportunities for women to enter the railway sector, which has not always been easy in a conservative country like Malaysia. She is the founder and director of Women in Rail (WiR) Malaysia, a free network designed to promote equality and diversity in the Malaysian railway industry. Natasha says she was inspired to set up the group by the founder of Britain’s WiR group, Adeline Ginn. Like the British organisation, WiR Malaysia facilitates networking opportunities and promoting existing or creating new opportunities for women to access railway education and employment.

“I’ve been blessed to have bosses and role models who helped me blossom in my career,” she says. “I was extremely lucky to have had many different opportunities throuhgout my career as well as the confidence to pursue them. Not every woman is as lucky as me.”

This sense of opportunity drives Natasha to act as a role model for young women. As well as providing support for its more than 500 members through conferences and online events, WiR Malaysia has hosted Leadership Talks with more than 5000 primary, secondary and tertiary-level students. These talks are aimed at encouraging young girls to consider studying Science, Technology, Engineering and Mathematics (STEM) subjects at a higher level and to consider rail as a career of choice.

“I started all of this because young girls need to know when they graduate what is coming in Malaysia and where the railway industry is headed,” she says. “It is really important to have role models, and that is not just me, so many other women go and talk to these kids and it’s nice to see that we’re warmly embraced, even by state education institutions.”

The pandemic has presented challenges to the sector, and Natasha admits the morale of many female industry employees has been hit by wage reductions and working from home. Some even lost their jobs, a situation compounded by a curtailing of railway investment in Malaysia in recent years.

However, WiR Malaysia has pushed on, and while some online events took a little time to get going, Natasha is “proud” of the Love Local series, which showcases what female business owners have done to ride out the crisis.

“It is really important to have role models, and that is not just me, so many other women go and talk to these kids and it’s nice to see that we’re warmly embraced, even by state education institutions.”

Her next big project is WiR Connect, which aims to take the British and Malaysian concepts global.

Natasha says she has had early interest from the Baltic countries and Britain, and she is looking to bring in participants from the Philippines, Singapore, Indonesia, and Japan. “WiR Malaysia has funded the set-up of WiR Connect and we want to use WiR UK’s global network to push it even further so that different countries can create their own small community, and when they start to create activities online, other countries can participate as well,” she says.

“If you have a bunch of women who have seen what I do here in Malaysia and they want to do it in their home country, but they’re worried that their boss won’t allow them the time off or they don’t have the funds to set this up, they can join WiR Connect and they can immediately see others in their country who have signed up. You can then get together for lunch, for coffee and before you know it, you are working together.”

Natasha is looking to host an in-person conference in Malaysia later this year, and in the longer term she hopes WiR Connect can facilitate greater mobility among female employees to work on rail projects around the world. Indeed, she says the network could help to nurture a global female talent pool, which will improve the rail sector’s overall competitiveness, an intriguing and potentially exciting prospect.

“I want to make the global rail community shrink in a way that will allow our industry to be at the forefront of national infrastructure investment,” she says. “You can put money in housing, in oil and gas, in finance, in all these sorts of industries. But let’s create that avalanche, that wave of excitement in rail, so that countries and governments will say we’re going to spend it here.”

PRIANNKA Kumar specialises in signalling. A member of the Institute of Engineers Australia and of the Institute of Railway Signal Engineers (IRSE), she has been selected to participate in the Horizons Programme 4.0 organised by Britain’s Rail Safety and Standards Board (RSSB), a six-month international programme aimed at developing tomorrow’s leaders today.

In 2021 Kumar was also chosen to take part in the Australian Rail Association’s Women in Rail mentoring programme. Described by her nominator as “a rising star in the Australian rail industry,” for the past two years she has been mentoring junior engineers in technical skills such as signalling arrangement plan design and more general skills including time management and project delivery.

She devised a new approach to training graduate engineers in signalling at Aurecon, which has allowed graduates to gain experience through tasks directly related to their daily work, improving their technical skills and gradually allowing them to become fully functioning members of the team.

Kumar was also a member of the Aurecon Spirit team, an inter-disciplinary community service initiative which helped the not-for-profit company Ability Works to gain access to the Australian rail industry.

Ability Works is dedicated to providing meaningful employment for disabled people and those experiencing disadvantage, and Kumar was able to use her network of contacts to help the company reach decision-makers in the industry.

RESPONSIBLE for IT, human resources, labour relations and communications, Annie Adams has been a catalyst for change and innovation throughout her 21 years in the railway industry. In her current role, she has made it a personal goal to attract and retain diverse talent at the company’s new headquarters in Atlanta, Georgia, created under a $US 575m initiative which Adams was responsible for overseeing.

To inform the design, she benchmarked other companies to create a building that aligns with the needs of providing a safe and collaborative workspace for all. At the head of several cross-functional teams, Adams drew on her background in human resources and industrial and organisational psychology to design amenities that provide an alternative venue for employees to interact and collaborate.

She has brought her passion for technology to the forefront of the new building by creating a technology-enabled workspace. Sustainability was also built in, through close attention to energy consumption, water use and ventilation.

Adams took the move to the new headquarters as an opportunity to create a progressive outlook on nurturing a healthy and productive company culture and as a clear embodiment of Norfolk Southern’s commitment to employee safety and wellbeing.