IRJ’s editorial team shines the spotlight on the final three winners of our inaugural Women in Rail Awards. 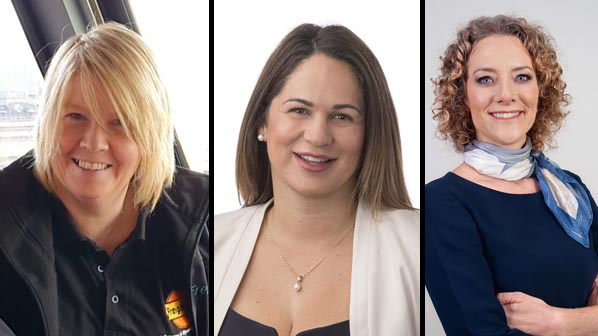 The final three winners of our inaugural Women in Rail Awards.

HEATHER Waugh joined freight operator Freightliner in 2019, following 12 years at ScotRail. She has been an advocate for encouraging more women into rail and rail freight in particular, challenging perceptions of this traditionally male-dominated sector through media appearances and being active on social media. Waugh features on the Careers page of the Freightliner website, sharing her experiences of life in the cab.

Having witnessed a suicide when at ScotRail, she is also a keen advocate for mental health awareness and volunteers with Samaritans. Waugh encourages her male colleagues to discuss their worries or concerns with her as she feels they are able to speak more easily with a female co-worker.

“So many amazing people in the rail industry have educated me to understand the importance of visibility, and have encouraged me to use my voice.”

In November 2021 she was invited to speak at COP26 in Glasgow, addressing an event on equality, diversity and inclusion, and has been invited to speak in Vienna as part of the European Year of Rail. “So many amazing people in the rail industry have educated me to understand the importance of visibility, and have encouraged me to use my voice,” she says. “But most rewarding of all is to be supported from people within your own grade. It’s why I ensure I do these things in my own time, and at my own expense. I think it makes the message more credible.”

WHEN Candis Rhodes entered Australia’s mining sector more than 11 years ago, she chose the rail division as an area where she could best use the unique set of skills from her Master’s in logistics and supply chains.

“Rail was a really deliberate move, I was looking to say, ‘where are my actual studies relevant, and where could I be a superstar’ because there’s not many people like me,” she says. “There weren’t that many women in rail or people who had a strong education background. And at the time, all the technology projects in rail were just starting to come through.”

Her first project was on switching from paper to electronic train graphs for train scheduling. “Getting people away from paper graphing, which they’ve been doing for more than 60 years, it was just unheard of, and they hated me,” she laughs. While this switch had failed to take hold three times in the past, Rhodes was able to frame it in a way that showed staff that once the new processes had been adopted, they would have a skill that no-one else in the world would have.

“It was quite a feather in my cap, and it gave me an opportunity to manage the train control team of 120 or so people,” she says.

“I took this role because I wanted a huge project that was technology or R&D based, because that’s what my strengths are in, and I wanted to create a great team again.”

Rhodes was also involved in the train control development of the AutoHaul automated heavy-haul freight railway, a world first.

Rhodes decided it was then time to move to a less demanding role that allowed her more time to be with her family, eventually leaving the sector to become a consultant, a role she held for four years. While the projects she was involved in weren’t rail related, they gave her experience in managing mega projects, a skill that has been integral in her current role as manager of Rio Tinto’s sustainable rail strategy.

“I took this role because I wanted a huge project that was technology or R&D based, because that’s what my strengths are in, and I wanted to create a great team again,” she says. Her work has included developing a business case to purchase battery-electric locomotives, with Rhodes’ team securing a $US 130m investment in April to purchase four locomotives.

Alongside her work for Rio Tinto, Rhodes also has a big passion for mentoring and has been involved in both the Women In Mining WA programme and iTrack mentor programme run by The Smith Family non-profit where Rhodes mentors 14-15 year-old students.

Rhodes has considered writing a book to answer some of the more frequent questions she has been asked while mentoring women, such as whether they will be affected by leaving the workforce to have a family, and how best to re-enter work. Others concern behaviours that women develop in the workplace, such as always apologising, always offering to make the coffees, or always being the one to have to organise team events. “Don’t do them,” Rhodes says. “Because there is an imbalance there, you have to be very conscious about how you do it.”

One obstacle Rhodes is trying to challenge is the idea that a background in rail is required to work in the rail sector. “You can teach people rail,” she says. Instead, employers should be looking at skill sets rather than just experience when hiring people, as well as promoting the sector to a wider range of possible applicants.

“I don’t know if this is an Australian thing, but I never heard about rail before I worked in rail,” she says. “There were no role models who were saying come work in rail, this is the opportunity.” Now that she is in a position to promote the opportunities in rail for women and other underrepresented groups, Rhodes says she still struggles to find opportunities to speak at conferences and other events. “I think that’s something that we could do to push rail,” she says.

JANAINA Schoenmaker has worked for Metrô, the operator of the metro serving São Paulo, for 14 years and has been responsible for the legal framework behind the city’s single ticket initiative. She has also worked to promote women to leadership positions within the legal management team at Metrô, where 53% of such posts are now held by women.

Schoenmaker has organised forums at work to discuss issues such as gender, racism, social inequality and sustainability, and approved company regulations on volunteer work. She implemented an internal leadership development programme which has a focus on expanding strategic vision and individual awareness, with a focus on self-knowledge. In collaboration with the technical team, Schoenmaker implemented an administrative restructuring programme which shares with the employee the ability to choose where to work and in what capacity.

Under her leadership, the legal management department has become something of a talent incubator at Metrô, as Schoenmaker coaches staff in preparation for taking up new roles elsewhere in the company. The department recorded an employee commitment score of 81.4% in an internal survey carried out in 2020, the highest at Metrô, and no doubt due in part to team-building initiatives implemented by Schoenmaker, such as a pet day, family day and a Master Chef competition.