IRJ’s editorial team shines the spotlight on the first three winners of our inaugural Young Leaders in Rail Awards. 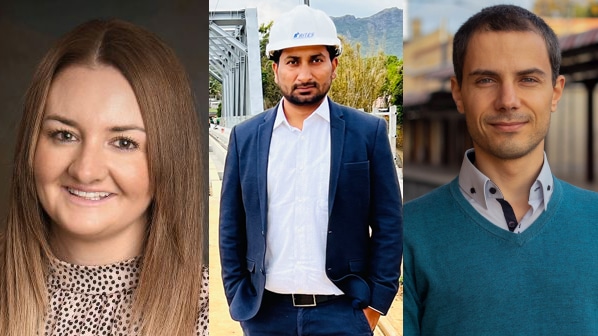 The first three winners of our inaugural Young Leaders in Rail Awards.

THE global rail industry is experiencing two concurrent human resources challenges: an ageing workforce that is nearing retirement and securing the talent it needs in a competitive marketplace.
Losing years of experience and industry know-how could set the sector back by many years just when it is under pressure to get more trains onto track. The industry also has a reputational issue. Rail is often perceived as a dirty and dangerous working environment that is not particularly innovative, meaning attracting the most talented people into rail is difficult.

Scratch below the surface of these often-repeated assertions and you find a number of talented and highly regarded young people who are doing remarkable things and driving the industry forward. Often their successes and contributions are not widely recognised or appreciated and that is why we have launched IRJ’s Young Rail Leader Awards.

We want to shine a light on 10 young people who are making an impact. Our finalists are working in different areas of the industry all around the world and many look well placed to become leading figures in the years to come. We hope that bringing their work to the industry’s wider attention will support their progress in some way and inspire others.

Don’t see your colleague on our list? Don’t worry, we plan to run the initiative again in 2023 and will once again be inviting nominations.

RACHAEL Southgate joined rail inspection company Sperry Rail in Britain as a data analyst at the age of 18 straight from sixth form college and has never looked back. “I always wanted to know how things worked,” Southgate says. “My father worked in the rail industry, and I think he passed his engineering background on to me.”

Southgate started her career at Sperry Rail examining ultrasonic test results and looking for faults in the data. During this period, she also studied mechanical engineering part-time. After five years, Southgate moved on to gain some practical experience in the field as a manual ultrasonic rail tester working with clients such as London Underground and Madrid Metro.

“I studied Spanish at night school before going to Madrid,” she explains. Southgate had to balance motherhood with her job. Even though she had a nine-month-old baby it did not prevent her from travelling back and forth to Madrid for two-week stints working on the metro.

She then spent six months studying data quality at Sperry Rail and the output of the company’s test trains. “This expanded into a full quality management system for Europe,” Southgate says. “During the next four years we changed how the company worked introducing better practice and processes, which are still in place today.

“The fun stuff is the challenging things: engineers saying it won’t work and me saying I will prove you wrong. I enjoy taking something on that needs a different approach. Our quality control system wasn’t broken but it could be better. For me, it is being in a position where I can make things better with a really good team around me. Everyone has their own skill set and it is important to recognise that.”

Southgate was able to put this philosophy into practice during her stint at Sperry Rail’s headquarters in Shelton, Connecticut, as global director of quality. “I enjoyed everything I did in Europe, but I grew up with it,” she said. “North America was very different - it was very much a culture of not sharing things with our customers whereas we were more transparent in Europe. After about 15 months, we started to see a shift in attitude towards being more open and collaborative.”

In August, Southgate was appointed managing director, Europe. “In my old job, I was trying to achieve one approach to quality throughout the company. Now I want to achieve something similar operationally. The European model has always been testing at night with data collection followed by data analysis. In North America, they would test, then stop to verify the results on the spot. North America is ramping up their software and we are updating our software to the latest versions. We are also trying to streamline the back office, then we will have the same key performance indicators and one standard approach. We want to make life easier for our staff.

“Over the past three years I have represented the British Standards Institute in the working group CEN/TC 256/SC 1/WG 50 and more recently in ISO/TC 269/SC 1/WG 5. These groups collaborate to standardise processes and implement best practice for rail inspection throughout the world. Recently I was awarded the British Institute of Non-Destructive Testing Gail Long Early Career Woman Engineer of the Year 2021 in recognition for my work in standardising and continually improving rail inspection, ultimately leading to better rail safety.”

Southgate says her ambition is to enhance quality systems and implement global standards for rail inspection that reduce risk, improve safety, and allow rail networks to make more informed decisions about their infrastructure. With her drive and infectious enthusiasm, there is little doubt she will succeed.

HUGO Miguel Pacheco Magalhães has an MSc and PhD in mechanical engineering from Lisbon University’s Superior Technical Institute (IST) and has been working in the rail industry for 11 years. He was a visiting scholar at Milan Polytechnic from 2017 to 2018.

“Most mechanical engineering students think of the automotive and aeronautical industries for their careers, but I had a professor in Lisbon who was working in rail who helped me to get into railway research,” Magalhães says.

After gaining his PhD in 2019, Magalhães moved to Britain to become a research fellow at the Institute of Railway Research at the University of Huddersfield where he had the opportunity to participate in three Shift2Rail projects: In2Track2, S2R-PantOCL, and NextGear as well as in the EPSRC project Track2Future.

“In the In2Track2 project we were trying to optimise switches and crossings,” he says. “The rail industry does not have tools which are very advanced. For example, the design of switch blades has been developed through experience whereas simulations can be used to optimise the design. During In2Track2 we were able to develop an advanced tool which produces hundreds of designs, and this tool is being used by colleagues in Huddersfield to design switches and crossings.”

Magalhães believes his greatest achievement to date is developing multibody software called MuboDyn from scratch to handle vehicle-track interaction including in turnouts which has been internationally benchmarked, competing with world leading software such as Simpack, VI-Rail, Vampire, and Nucars. “MuboDyn is state-of-the art, although it is not commercialised yet,” Magalhães explains. “Having in-house software means we can improve it ourselves rather than having to rely on a commercial software producer.

“We are currently consolidating the code in the software to have very fast simulations. I see a lot of potential for its development.” The code has been used in several research projects. For example, the software will be used to determine which sensors and processors should be fitted to a Portuguese freight locomotive to predict when maintenance is required.

“I am an enthusiastic complex problem solver with innovative ideas, and I find working in the rail industry interesting,” Magalhães continues. “I think my work in computational modelling to develop tools to support the industry’s move to predictive maintenance will be beneficial.”

In March of this year Magalhães returned to the IST as a post-doctoral researcher. “One of the things I am currently fighting for here is to promote a course on railways,” he says. “I think the time is right as there are now more funds available for rail projects in Portugal. I plan to write a handbook on railway dynamics which could be used by railway students.”

Magalhães sees two options for his future career. One would be to become a railway professor in Portugal. The other is to move into the railway industry, where he says he has already built up a good network.

PRIYANK Kumar Etauria is on a mission to reduce transport costs for developing countries across the world. And, based on the work he’s completed already, he’s well on the way to achieving it.

After receiving a bachelor’s degree in technology and civil engineering from India’s National Institute of Engineering, Etauria was given the opportunity to join the urban rail sector of Rail India Technical and Economic Service (Rites), an engineering consultancy wholly owned by Indian Railways (IR) specialising in transport infrastructure.

Etauria says he was drawn to the rail sector due to its ability to provide people with cheaper, more environmentally-friendly transport options, while also reducing the impact on the surrounding urban areas. In particular, he says his focus is on developing methods to reduce the cost of urban mass transit.

“I always wanted to contribute to nations which are in the developing stage, to provide them with state-of-the-art railway infrastructure which they can afford,” he says.

During his career, Etauria has focused on the preparation of detailed project reports, feasibility studies and alternatives analysis reports, along with alignment design, to support the selection of the optimum transit system for each city. This includes the development of studies for mass rapid transit systems in Chennai, Nagpur, Thane, Pimpri-Chinchwad, Kanpur, Varanasi, Allahabad, Gorakhpur, Patna, Guwahati, Kochi, and Coimbatore.

As part of this work, Etauria led the team that created the “metro light” concept, which has since been promoted by the Indian government as an alternative that could be 30% cheaper and implemented more quickly than conventional light rail in smaller cities.

Many Indian cities are densely populated and have narrow roads, which in the past has led to many urban transport systems such as those in Delhi and Kolkata being built underground, increasing construction costs. Instead, Etauria is looking at ways to promote elevated lines.

During the development of Chennai Metro Phase 2, the initial detailed project report proposed moving
80% of the 119km line underground, with the remaining 20% elevated. Etauria was given the challenging task of maximising the use of elevated sections to reduce construction costs without changing the catchment areas of the metro. This involved resolving several challenges, including working in densely populated areas, issues with existing, under-construction and proposed major roads, and integration with the existing suburban railway network and Chennai metro Phase 1.

Outside India, in 2021 and 2022 Etauria was responsible for developing feasibility studies for Mauritius LRT Phase 4 and Bahrain Metro Phase 1B as project coordinator and alignment expert. The studies had to be carried out to international standards and new system parameters which had not been used in India before.

Rites has now appointed Etauria as resident engineer (civil) for project management consultancy on the Mauritius light rail programme. Along with civil engineering and other track work, he is overseeing the construction of a 62m-long single span Warren truss steel bridge under Phase 3 of the Mauritius LRT project.

Categories: Employment
Tags: 10 under 40, Institute of Railway Research at the University of Huddersfield, Premium, Rites, Sperry