Is ETCS missing an open goal?

German Rail (DB) is spearheading the campaign to get open-source software accepted for ETCS applications in Europe, awarding the first contract for open-source onboard equipment, as David Briginshaw reports. 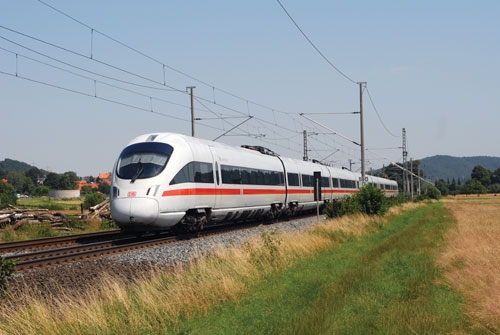 ICE-T will be the first train in Europe to be fitted with Open ETCS onboard equipment. Photo: Quintus Vosman

THE so-called Open ETCS campaign to allow the use of open-source software for ETCS is the brainchild of Mr Klaus-Rüdiger Hase, who is head of the ETCS onboard programme with DB Networks, Germany's infrastructure manager. While the campaign is gradually winning the support of a number of railways, suppliers, and others involved in ETCS, it still faces considerable opposition, particularly from those who believe that using open-source software poses a danger to safety-critical applications because the original developer of the software will lose control of the system.

Hase believes that switching from closed-source to open-source software will reduce ETCS costs and simplify the approval process. "There is a lot of confusion about open-source software," he told delegates at Global Transport Forum's signalling and train control conference in Zürich last month. "People think that open source means everything can be changed, but it does not, you have to follow certain procedures. With open source, you have the freedom to analyse, change, and distribute the software, whereas with closed-source software, only the manufacturer can change it, or fix a problem. Open source is not a technology, it is a licensing issue. You can have the same software which is licensed under open or closed source, but the licence gives the licensee a number of rights."

Hase admits that open-source software is still a controversial issue, but points out that it is the fastest growing segment in the IT industry. "IBM has completely changed to open source," he says. "DB is one of the biggest users of open-source software and has more than 2500 servers with it. You cannot buy a single train ticket in Germany without using open source, and we have never had a service level breach. If it is true for non-safety-critical applications why shouldn't it be the case for safety-critical ones?"

Hase believes ways have to be found to reduce the cost of switching to ETCS and to simplify the processes involved so that the original objective of ERTMS - an interoperable European rail network - can be achieved. As he points out: "Not a single unit has been approved so far which can operate on all ETCS lines in Europe."

Part of the problem, Hase says, is that most of the ERTMS hardware, software and interfaces are proprietary designs so all the interfaces are different. "This leads to vendor-locking which we as customers do not like. For the most part, you end up with a black box design. With ETCS, there is a public standard - SRS - but it is written in Brussels English, which means we need to have a specialist who understands it.

"So what can we do?" he asks. "We need a single specification, written in a formal way, so there is no need for interpretation. This means Open ETCS. It's not magic, it's just formal and under an open licence." Hase says it will be necessary to introduce an application programmer's interface (API) so that the same software can be used on different hardware.

"With all the interfaces open there is exchangeability and it is obsolescence-proof," says Hase. "Instead, you have a form fits function interface specification."

According to Hase, this would turn ETCS into a building-block system which adds functions that allow the software and the hardware to move from one level to the next. "ETCS must be upgradable and we must get rid of vendor locking," he asserts.

DB needed to retrofit its ICE-T tilting emus for operation on ETCS-equipped lines in Austria and Switzerland, so it invited bids. "We had eight applicants for the project all of which signed up to the idea of Open ETCS," Hase explains. "We then received three valid offers, two of which included the open-source software clause. Alstom won the tender and gave us an open-source agreement.

"We had to pay for the licence, but we can then go to other parties if we so desire. We won't change what Alstom has developed, we have just obtained a licence. Alstom has more than 2000 ETCS Level 2 onboard units out on the market, so it has covered its initial research and development costs and is now getting a return on its investment."

DB already has more than 100 vehicles fitted with ETCS for cross-border operation, and by the end of the year it will have sufficient ICE-T trains with onboard ETCS to start operating to Vienna. This will be followed by services to Switzerland.

However, it appears to cost DB significantly more to fit ETCS to a train than it does other railways. "We have got the cost of retrofitting a train with ETCS down to €100,000, which means it is now cheaper than equipping a train with our own ZUB signalling system, which costs €170,000," Mr Jan Richard, Swiss Federal Railways' (SBB) innovation and technology manager, told IRJ in Zürich. A benchmarking exercise of several European operators confirms that the cost of equipping trains with ETCS has fallen and is more in line with the Swiss experience.

So far five European operators or associations - DB, French National Railways (SNCF), Netherlands Railways (NS), Trenitalia, and Britain's Association of Train Operating Companies (ATOC) - have signed a memorandum of understanding to define and prepare open-source ETCS. "We have a three-year plan to finish this project," says Hase, who likes to quote the German philosopher Arthur Schopenhauer: "There is great resistance to change, but when it comes, those people who were against it defend it strongly, and then finally declare that they were always in favour of it."