Just over a year from now the first trains will start to carry passengers under the Bosphorus, linking the Asian and European sides of Istanbul by rail for the first time. It will also be the world's first rail link to combine CBTC and ERTMS on one line, reports David Briginshaw from Istanbul. 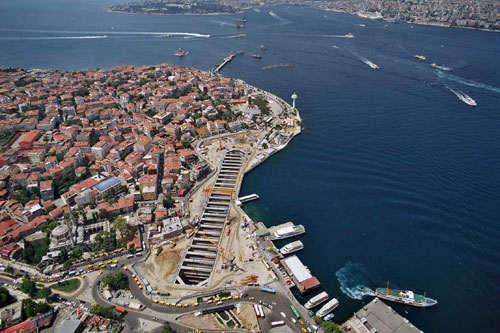 THE Bosphorus has been the making and in some senses the breaking of Istanbul. It is the city's raison d'être and a major source of trade and wealth, but it also splits the city in two. While two road bridges span this very busy waterway, they are upstream from the city centre, and are often choked by Istanbul's appalling road traffic. A contract for a third bridge was awarded on May 30, but this will be constructed at the northern end of the Bosphorus. Meanwhile many of Istanbul's 13 million inhabitants depend on a multiplicity of ferries - including a small train ferry for freight - to cross from one side to the other.

But relief is finally at hand, as next year the first phase of the so-called Marmaray rail project will be completed. On October 29 2013 - the 90th anniversary of the founding of the Turkish republic - the 13.3km rail tunnel under the Bosphorus and city will open for business. A shuttle service is envisaged between Kazilicesme, Yenikapi and Sirkeci on the European side and Üsküdar on the Asian side until the rest of the project is completed.

The Marmaray project will provide Istanbul with a modern high-capacity 76.3km railway linking Halkali in the west with Gebze in the east, knitting Istanbul's diverse collection of tram, light rail, light and heavy metro lines together to form an integrated network. The project involves rebuilding and upgrading Turkish State Railways' (TCDD) existing lines on each side of the Bosphorus and connecting them with the tunnel.

Work on the $US 3bn scheme started in August 2004 and was divided into three main elements. The Bosphorus crossing contract covers the construction of the tunnel which comprises a 1.4km immersed tube under the seabed, 9.8km of bored tunnels under the land plus some sections of cut-and-cover tunnelling, and the new underground stations. A surface station has since been added to the project at Ibrahimaga to provide an interchange with the Kadiköy - Kartal metro line, which passes beneath the Marmary line, and is due to open soon.

Tunnelling was completed last year and track-laying is now underway. To prevent flooding, two sets of gates connected to an interlocking are installed at each end of the immersed tube, and emergency cross passages between the two running tunnels are located at 125m intervals in the immersed tube and every 200m in the bored tunnel.

The underground stations have 270m-long island platforms. Yenikapi will become a major interchange on the European side as metro lines 1 and 2 are both being extended south to terminate there. Sirkeci will connect with tram Line 1, and Üsküdar will interchange with metro Line 6, construction of which has just started (see panel below).

The €580m rolling stock contract for 34 10-car and 20 five-car emus was awarded to Hyundai Rotem in November 2008. About 70% of the fleet has been built so far, but only six out of 10 trains available will be needed initially to operate the underground shuttle.

The so-called commuter rail contract, which includes the tunnel, went to a joint venture of Obrascon Huarte Lain (OHL) and Invensys Rail Dimetronic. OHL is responsible for the track and catenary, while Invensys Rail takes care of the signalling and telecommunications.

The reconstruction of the existing lines is comprehensive and involves dismantling the existing railway section by section, which started in April with the eastern end of the line from Pendik to Gebze. As a result, Istanbul is now isolated from the rest of the Turkish rail network until reconstruction is completed. The work involves removing the existing double track, signalling and electrification and laying a new three-track electrified railway. Two tracks will be used by Marmaray commuter trains as well as freight trains, while the third track will be for high-speed trains: the Ankara - Eskisehir high-speed line is currently being extended towards Istanbul and is due to open in 2015. The third track will have 10 passing loops at 4.5km intervals on the Asian side, but only three loops are needed on the European side.

The original plan was for the tunnel to be used exclusively by commuter trains during peak hours, with high-speed trains allowed to run though the tunnel at other times, and freight trains restricted to the night. However, TCDD has yet to make a final decision on whether high-speed trains will terminate in Haydarpasa on the Asian side or run under the Bosphorus to the European side and beyond. Clearly high-speed passengers would benefit from being able to join trains on the European side, but this could reduce the capacity of the commuter service.

Invensys Rail is responsible for removing the old signalling and telecommunications equipment, design and supply of a new system comprising ERTMS Level 1, CBTC for both the infrastructure and rolling stock, CTC, hot-axle detectors, a Scada system, telecommunications including GSM-R radio, public address, passenger information and CCTV, and staff training. Invensys will maintain the equipment for two years and has an option to extend the maintenance contract for another five years.

On the surface, train detection will be by jointless track circuits, and the two commuter tracks will be fitted with both CBTC and ERTMS, while the third track will only have ERTMS. The tunnel will have both types of train control but train detection will be by axle counters. Fall-back lineside signalling will be installed throughout the Marmaray line. Signals will be mounted on conventional lineside masts in the immersed tube as it is forbidden to drill holes in the walls for obvious reasons.

The Hyundai Rotem fleet will solely be equipped with CBTC and drivers will refer only to their cab displays. Initially, only maintenance vehicles will be fitted with ERTMS, but as TCDD's high-speed fleet is already equipped with ERTMS they will be able to use this on the Marmaray line. Freight trains are expected to use the lineside signalling, but will be able to switch to ERTMS as its use on the TCDD network expands over the next few years.

The interlocking will control the interface with both CBTC and ERTMS, and track circuits and axle counters will be able to detect all types of train, passing information to the block processor. The key principles behind the Marmaray train control system are that everybody can communicate with everybody else and safety is always guaranteed regardless of which system is being used. While CBTC uses a radio-based data transmission system, ETCS Level 1 does not.

As a train travels along the line, a so-called soft handover takes place between one block processor and the next during which time the train is communicating with both block processors. The handover must be long enough for it to take place without an interruption in communication, but handover does not take place in a fixed location as it depends which channel is transmitting.

Under CBTC operation, trains will operate automatically, with drivers monitoring the system and opening and closing the doors at stations. With CBTC, the line will function with moving block to achieve 90-second headways and a peak-time capacity of 90,000 passengers per hour per direction (pphpd), whereas under ETCS Level 1 only 2-minute headways will be possible. The off-peak capacity with CBTC will be 75,000 pphpd whereas the old railway had a capacity of just 10,000 pphpd.

The total number of trips per day in 2015 is estimated at 1,500,000 passengers and is expected to increase to some 1,700,000 passengers by 2025. An end-to-end journey time of 105 minutes from Gebze to Halkali is planned compared with a train-ferry-train trip of around 3 hours. Shorter cross-Bosphorus trips from Sögütlüçesme to Yenikapi will take 12 minutes and Üsküdar - Sirkeci 4 minutes.

Fitting out of the underground section is due to be completed in July 2013. This will be followed by testing of the fixed installations, system integration tests lasting around one month, and two months of trial operation. The surface sections are due to open in stages during 2014, although TCDD would like to open at least one section before the end of the next year as it is keen to reap the benefits of this critical project as soon as possible and to reconnect Turkey's largest city with the rest of the national rail network.

A GROUNDBREAKING ceremony was held on June 6 to mark the start of construction of metro Line 6. The event was attended by the mayor of Istanbul Mr Kadir Topbas, Turkey's transport minister Mr Binali Yildirim, and senior managers from the Dogus group, which won the €564m contract to build the line.

The new line 6 will run entirely underground from Üsküdar east via Ümraniye to Çekmeköy with 16 stations. The 20km line follows a corridor to the north of Line 4 and will provide the Asian side of Istanbul with its second metro.

A 2.72km branch running northwards will connect the metro to a new depot located towards the eastern end of the line. The project is expected to be completed by 2015.