Gas-pressure welding currently accounts for more than 30% of all rail welding taking place in Japan. However, environmental concerns and an expected skills shortage have prompted revisions to the method, as Ryuichi Yamamoto, senior chief researcher, head of the Rail Welding Laboratory, Track Technology division at the Railway Technical Research Institute, explains. 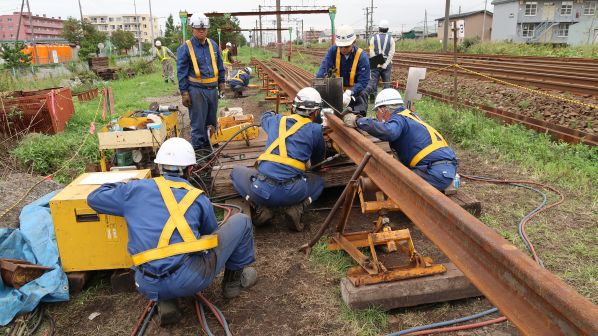 GAS-pressure welding is a form of solid phase welding that can achieve bonding without causing a significant melt of the base metal and is commonly used for welding rail joints on Japanese railways.

Gas-pressure welding is achieved by butting work pieces together, applying a suitable amount of axial pressure, and heating the joining area with an oxygen/ acetylene flame to about 1200oC, until the upsetting amount reaches a predetermined value (Figure 1). This welding method does not use heavy equipment, and produces highly reliable joints that are about as strong as the work pieces being jointed together. For these reasons, it is often used for welding rails and steel reinforcing bars.

Developed in Japan and the United States around the same time in the 1940s, gas-pressure welding technology was later studied in the former Soviet Union and Germany, with a view for use with rail welding. However, since the 1960s flash butt welding methods have become the norm for rail welding, and today gas-pressure welding is used sparingly in most regions of the world.

Japan has taken a different route. Rail gas-pressure welding equipment was developed in 1953, and since then both the equipment and the method have been updated and improved on numerous occasions.

Initially, gas-pressure welding took place almost exclusively in welding plants, but since the welding equipment weight was reduced in the 1970s, on-site operations became feasible, leading to the steady expansion of the method throughout Japan. Gas-pressure welding (GPW) now accounts for 31% of all rail welding in Japan according to figures from 2014. The most popular method is alumino-thermic with 38%, while flash accounts for 24% and enclosed arc 7%.

Bulges formed during the pressure welding process were traditionally removed through gas scarfing, but a hot shearing method was developed to improve workability.

The hot shearing method, which removes the bulge immediately after welding, not only improves workability but also enables simple, highly precise inspections. This has greatly boosted the reliability of gas-pressure welded joints.

However, there are some issues with this welding method. Firstly, welders need considerable expertise when grinding end surfaces and when using the heating burner. A shortage of welders with such expertise is predicted, so in the future companies may find it difficult to ensure quality joints. Another problem is that today’s gas-pressure systems use acetylene as the combustion gas and the combustion reaction involving oxygen produces carbon gases, leading to concern over the environmental consequences of this process.

For the above reasons, RTRI is working on a new gas-pressure welding system for rails that is environmentally-friendly, easy to use and requires a lower level of expertise, with a significant breakthrough now achieved.

This method is based on using a mixed gas solution of hydrogen and ethylene as an alternative to acetylene, which promises to significantly reduce the environmental impact of the process.

Early tests with the alternative method indicated the need to expand the shielding area for the flame. In addition, the adapted process would require an enhanced heat burner where the density of the burner nozzles was rearranged to improve the quality of the weld.

Accordingly, a magnetic particle test and a static bending test were performed for the welded joints of a 60kg standard carbon rail using the enhanced burner to evaluate the suitability of the mixed gas solution for gas-pressure welding.

During the magnetic particle test, a 3mm-long linear indication was detected at the edge of the rail base. The rupture load and deflection in a static bending test were below the reference values of 1180kN for rupture load and 13mm for deflection with a hot crack observed on the fracture cited for causing the rupture.

When hot shearing of a bulge is performed immediately after the heating process, a plastic deformation forms in the area under the edge. Consequently, if bonding work is poor, a hot crack occurs at the weld interface because the bonding strength is not able to resist the stress caused by the plastic deformation. With the hot crack appearing at the edge of the test piece, it was understood that it is difficult to effectively expand the shielding area of the rail base even when the improved heating burner is applied.

As a result, efforts focused on expanding the shielding area by increasing the tip diameter. This was achieved through a GPW test, which investigated the relationship between the tip pattern diameter and the occurrence of defects.

Here the upset force and upset length are the same as in the conventional method while conventional apparatus, such as the compression device and bulge removal device, are also applicable with this new method.

With these conditions established, a series of tests was conducted on the specimens to evaluate their joint performance:

With these tests proving the validity of the method, a comparison test was carried out to demonstrate the environmental friendliness of the revised welding method. The test showed that using the mixed gas method at 135 litre/minute for a welding time of 7.5 minutes compared with 7 minutes using acetylene gas at 105 litre/minute produced 0.95kg of CO2 compared with 2.92kg using the conventional method.

While the use of mixed gas has improved the environmental performance of the weld, the complexity of using a special grinder for rail-end surface grinding to prepare the rail for welding means that an untrained welder could damage the flatness of the rail-end surface.

With gas-pressure welding generally applied in first or second stage welding using predominately new rails which are cut very precisely by the manufacturer and are generally sufficiently flat not to require grinding, RTRI examined these rails to consider whether it would be possible to eliminate this process entirely and simplify the GPW operation for technicians.

The results of this analysis showed less of a variation compared with the ground rail-end surfaces, indicating that the newly manufactured rail-end surfaces are already flat enough for gas-pressure welding once any rust is removed using a small-scale grinder.

Further improvements were sought with the heating process. This again requires special skills to use a heating burner to heat the interface sufficiently between butting sections to achieve a good-quality weld. Problems are often experienced with overheating with the heating burner regularly swung during the process to avoid overheating. However, with no one technique for this process, success is dependent on the skill of the welder, meaning there is a strong chance that fluctuations might occur in weld quality.

To achieve swing standardisation, gas-pressure welds produced under various conditions were examined to evaluate the influence of the swing pattern on the quality of the weld on JIS 60kg standard carbon rails. The results showed that there was no correlation between the rupture load at which the gas-pressure welds were broken in the head-up position and the swing start time.

With the ratio of heat dispersion to the periphery increasing when the swing start time is advanced, it is understood that the quality of the weld drops due to a decrease in heat input at the welded part. There was a correlation between the rupture load of the test pieces in head down breaking mode, in which the rail head was tensioned, and the swing start time in the test. The time required to heat the welded part to a sufficient temperature increased as the volume of material increased, meaning that quality can diminish easily in a rail head with a larger volume when the swing time is advanced. As a result, the burner swing width should be as narrow as possible to reduce the level of heat dispersion to the periphery.

With consideration for these results, researchers subsequently came up with the following standardised swing pattern for the burner:

With a view to deskilling this process entirely, work was carried out to develop an automatic heating burner swing device.
In this system, the heating burner is connected with a coupling rod to the swing block, which is reciprocated by the means of a ball screw driving mechanism. The device also has the mechanism to make the heating burner follow the movement of the weld interface.

Under this proposed system, it is possible to perform gas-pressure welding after the removal of any rust on the rail-end surface. Tests were subsequently conducted using the same parameters as the gas tests and showed that the specimen had the same fatigue strength of 320N/mm2²as the welded joint using the conventional method. Hardness tests and micro-structure tests also revealed no abnormalities, indicating that the new welding process could offer the same performance as the conventional process, overcoming the potential skills shortage.

While no Japanese railways have adopted these processes yet, they do offer significant promise as a skills shortage becomes more of an issue and in light of expected problems with the supply of acetylene. There are also potential opportunities for the use of such methods in developing countries where sufficient skills are in short supply, indicating that gas-pressure welding may increase in popularity in the future. IRJ