In the birthplace of high-speed rail, JR Central is preparing for even higher speeds and greater capacity while maintaining its lead in reliability and safety. Keith Barrow looks at how a new generation of Shinkansen trains and a 500km/h maglev line will transform travel on the Tokyo - Osaka corridor. 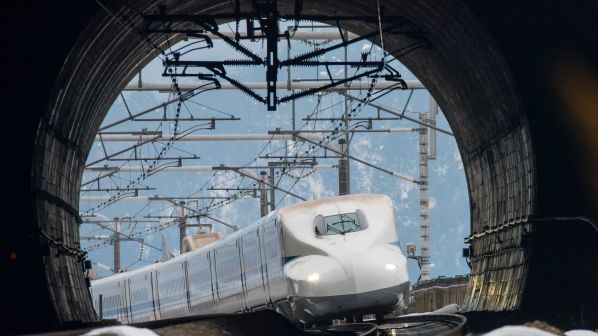 ON October 1 1964, nine days before the start of the 1964 Olympic Games, Japan became the first country in the world to open a high-speed line with the inauguration of the Tokaido Shinkansen from Tokyo to Shin-Osaka. As Tokyo prepares for the return for the games in 2020, the line’s operator, Central Japan Railway Company (JR Central), is poised to launch a new generation of high-speed trains on the route while construction ramps up on a 500km/h maglev line between Tokyo and Nagoya, which will bring another leap forward in connectivity in the late 2020s.

JR Central’s network, which encompasses the Tokaido Shinkansen and 12 conventional lines, serves a region covering 23.7% of Japan’s land area with 60.3% of the population and 64.4% of the country’s GDP. In the 2017 financial year, the company generated non-consolidated operating revenues of $US 13.5bn, 88% of which was derived from the Tokaido Shinkansen.

Despite a rigorous policy of continuous development, which has kept the Tokaido Shinkansen at the cutting edge of high-speed rail technology, this vital artery is under pressure on multiple fronts. The oldest structures on the line are nearly 60 years old and large-scale renovation is underway as part of a preventative maintenance strategy. However, closing such an intensively-used railway for anything more than a few hours at night is not an option.

A very different threat emanates from deep beneath the Pacific Ocean. The fault line running through the Nankai Trough periodically unleashes megathrust earthquakes on the southern coast of Honshu. Earthquake resistance and response measures ensure the Tokaido Shinkansen is well protected from seismic activity, but the risk remains that a severe earthquake could disrupt operations at any time.

“There will come a day when we have to stop operation of the Tokaido Shinkansen for maintenance or if we have a natural disaster,” JR Central board member, Mr Torkel Patterson, told delegates at Terrapinn’s Rail Live conference and exhibition in Bilbao last month. “Our responsibility is to the future of Japan Inc. We have a central responsibility to provide infrastructure for the country so that in the event of a large-scale disaster the economy won’t be disrupted.”

The third challenge is passenger volume. The Tokaido Shinkansen is approaching the limits of its capacity, with trains running at four-minute headways in the peak. The line is used by an average of 368 trains and 466,000 passengers a day, although it continues to maintain world-beating punctuality, with an average delay of just 42 seconds per train.

JR Central’s response to these challenges is the Chuo Shinkansen, a 285.6km line arcing inland through the mountains between Tokyo and Nagoya. With 86% of its alignment underground, the Chuo Shinkansen will have less of a presence in the landscape than its predecessor, but from a technological and engineering perspective, it will be no less revolutionary.

Due to open in 2027, the new line will use Japan’s Superconducting Maglev (SCmaglev) technology with trains operating at speeds of up to 505km/h, reducing the fastest Tokyo - Nagoya journey time from 1h 26min to 40 minutes. Services will be operated by a fleet of 16-car driverless trains running at 10-minute headways.

The line will start at Shinagawa station in Tokyo, serving intermediate stations in Kanagawa, Yamanashi, Nagano and Gifu prefectures before reaching platforms directly beneath the existing Nagoya station. Key engineering features include the 25.7km Southern Alps Tunnel, which will reach a depth of 1400m below the mountain surface.

Construction work is now underway on the mountain tunnels and on the stations and tunnels in Tokyo and Nagoya. In Tokyo, a 36m-wide 83m-deep shaft has been excavated 1.5km from the site of the terminus station at Shinagawa to enable the launch of TBMs.

The total cost of the project including stations and rolling stock is Yen 5.52 trillion ($US 49.6bn). Construction is being funded through JR Central’s cashflow, with the Japanese government providing Yen 3 trillion in financing from the Fiscal Investment and Loan Programme (Filp) via Japan railway Construction, Technology and Transport Agency (JRTT). The five Filp loans have a weighted average interest rate of 0.86% and mature in the mid-2050s. This means JR Central will be able to use operating revenues from the new line to cover the redemption of liabilities, thereby mitigating redemption risk.

JR Central says it will begin construction of the 152km second phase from Nagoya to Osaka “after reducing long-term debt by a certain amount.” The aim is to keep long-term debt within a Yen 5 trillion threshold until the entire line is operational.

Together with the Tokaido Shinkansen, the Chuo maglev is intended to create “a dual system for the main artery of the Japanese economy.” JR Central says the new line will foster the creation of “super mega region” in the Tokyo - Nagoya - Osaka corridor, integrating the three metropolitan areas and serving a population of around 70 million.

With the opening of the Chuo line, the timetable on the Tokaido Shinkansen will be recast, reflecting the transfer of long-distance passengers to the maglev. JR Central operates three service levels on the Tokaido Shinkansen: Nozomi (express), Hikari (semi-fast) and Kodama (stopping). After 2027, Nozomi services will on the will be reduced, enabling JR Central to step up Hikari and Kodama services. Patterson says smaller cities such as Shizuoka and Hamamatsu “will do really well” from this change in the service pattern.

The maglev is also expected to draw market share from airlines. Despite the established presence of high-speed rail, Tokyo - Osaka is still one of the busiest air routes in the world, carrying 5.1 million passengers in 2017 and occupying up to four slots an hour at Tokyo Haneda airport. Shifting some of this traffic to the Chuo Shinkansen would release capacity at Haneda for international flights.

JR Central is confident the SCmaglev technology has reached the level of technical maturity needed to deliver safe, reliable and fast travel on the Tokyo - Osaka corridor, and export opportunities are now being actively pursued. “We’ve spent years developing maglev technology, which is much improved, much more stable, and ready for prime time,” Patterson says. “This is truly amazing engineering.”

In parallel with the construction of the Chuo Shinkansen, JR Central is developing a new generation of high-speed trains for the Tokaido Shinkansen with the aim of delivering further improvements in safety, comfort and operational performance.

Unveiled in March 2018, the prototype N700S fuses proven design features from the preceding N700A train with an array of new technologies.

Energy consumption at 285km/h will be 7% lower than that of the N700A and the propulsion system is 20% lighter, thanks largely to a new-generation silicon carbide (SiC) semiconductor, which JR Central has developed in partnership with Toshiba, Hitachi, Mitsubishi Electric, and Fuji Electric. The number of electromagnets in the traction motor has been increased from four to six with smaller magnets, enabling a 70kg weight reduction while maintaining the output of motors used on the N700A. A double-helical gear unit reduces the load on the bearings and enables gears to mesh with greater stability, reducing noise levels and increasing bearing reliability.

The pantograph has been redesigned with a flexible contact strip to enhance current collection and extend component life, while the number of pantograph supports has been reduced from three to two, resulting in a weight saving of 50kg per vehicle compared with the N700A. A redesigned bogie frame enables the N700S to shed another 75kg per car.

Another new feature on the N700S is the lithium-ion battery self-propulsion system, which enables the train to operate catenary-free at low speed in the event of an earthquake or major power outage.

The underfloor equipment layout has been optimised to increase the flexibility of the design, with just four vehicle types in each formation. This means it will be possible to use the same vehicle designs to produce eight, 12, and 16-car trains.

The most visible external change is around the nose of the train, which has been redesigned to reduce drag, micro-pressure waves in tunnels, exterior noise, running resistance and rear car oscillation. LED headlights have been introduced to reduce energy consumption, with a revised headlight shape to improve visibility.

In the event of an earthquake, the stopping distance for an automatic emergency brake application at 285km/h is reduced to 2.8km, compared with 3km for the N700A.

For remote monitoring, the train-shore data transmission speed has been increased tenfold compared with the third generation N700A, enabling more detailed analysis of vehicle condition while the train is still in operation.

Green Car vehicles feature larger LCD passenger information screens, large side panels with integrated luggage storage, and a new seat design with 15% more legroom. Seating in standard class has also been redesigned with a revised reclining mechanism and power sockets at all seats.

The train has a maximum speed of 33km/h and JR Central plans to carry out 360km/h testing with the prototype set this year. The first production N700S trains are expected to enter commercial operation in July 2020.

JR Central is actively seeking export markets for the SCmaglev and N700S, with the United States the leading contender to become the debut international customer for both technologies. Texas Central Railway, the privately-financed developer of the Dallas - Houston high-speed line, has adopted Shinkansen technology for the project and plans to operate a fleet of around 15 eight-car N700S sets on the 390km route.

In the northeast, plans are taking shape for a maglev line connecting Washington DC and Baltimore, which could ultimately form part of a 360km high-speed link between the US capital and New York.

The 64km line would run underground for most of its length, serving a single intermediate station at Baltimore Washington International (BWI) Thurgood Marshall Airport. Trains would operate at up to 500km/h, with a Washington - Baltimore journey time of around 15 minutes.
Maryland Department of Transportation (MDOT) received a $US 27.8m federal grant in 2015 for environmental studies and preliminary engineering.

The United States Federal Railroad Administration (FRA) and MDOT are preparing an Environmental Impact Statement (EIS) for the project. The draft EIS is due to be published in the autumn and this will include details of the preferred alignment for the proposed line. The final EIS is expected in mid-2020.