JR Central plans to open the 500km/h Chuo Shinkansen maglev line linking Tokyo with Nagoya in 2027. Yoshitaka Yasuda, with JR Central’s Public Relations Department in Tokyo, outlines the progress so far and some of the challenges facing this ambitious project. 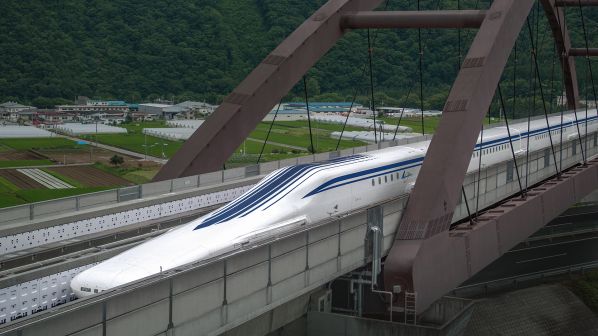 JR Central has conducted tests on the Yamanashi maglev line since 1997 and expects to expand this with a new vehicle beginning next spring.

THE Chuo Shinkansen maglev project will play the role of a bypass for the Tokaido Shinkansen connecting Tokyo, Nagoya and Osaka. Because of this, the alignment between Shinagawa in Tokyo and Nagoya will penetrate through the inland mountainous area as the Tokaido Shinkansen high-speed railway runs along the coast. Currently, we are proceeding with the construction of the Shinagawa - Nagoya section as the first stage with the opening planned in 2027.

After we received the construction order from the Ministry of Land, Infrastructure, Transport and Tourism (MLIT) in May 2011, we launched environmental assessment procedures along the planned route between Tokyo and Nagoya which took nearly four years to complete. In August 2014, we submitted the final environmental impact statement to MLIT and received approval in October 2014.

We have continued to hold briefings to introduce the project to individual municipalities and local governments along the planned route to explain the ways in which we will work with local communities in as detailed a manner as possible. Furthermore, we have carefully proceeded with preparation towards the start of the construction by conducting centre line surveys, implementing designs and holding discussions, acquiring land, concluding construction contracts, and holding construction briefings with local residents.

We will work on the project with the basic premise of securing sound business management while placing importance on construction safety, environmental conservation and coordination with local communities.
Since the schedules differ from place to place, it is difficult to explain the construction schedule in a simple way. Basically, we have started construction at sites where the necessary preparations, such as project and construction briefings to local communities, centre line surveys, design, and land acquisition have been completed.

Regarding the future, this is a large, long-term project and the schedule to achieve the planned opening of the Chuo maglev line in 2027 is very tight, but we will do everything we can to accomplish it.

“The superconducting maglev technological developments necessary for the revenue service line have been completed.”

Since high pressure spring water is expected depending on geological conditions, we will conduct the excavation work with advance checking of geological properties using state of the art survey technologies.

The construction of the Shinagawa and Nagoya terminal stations involves open-cut excavation beneath structures currently used for both the Tokaido Shinkansen and conventional railway lines. We need to conduct the excavation without affecting the daily operation of the existing railway.

Construction is therefore limited to the overnight non-operating hours, and since there are overhead catenary wires, the space available for construction is limited. We will pay extreme care to safety during the construction of the stations.

JR Central began running tests on the Yamanashi maglev line in 1997. Since then, a wide range of tests have been completed. Taking these test results, the Maglev Technological Practicality Evaluation Committee (MTPEC) under MLIT has evaluated the superconducting maglev technology at each stage.

In February 2017, MTPEC acknowledged that “the superconducting maglev technological developments necessary for the revenue service line have been completed.” The Yamanashi maglev line has conducted the running tests safely with the accumulated running distance surpassing 3.1 million km.

Superconducting maglev technology is already proven, but we are currently working to improve the technology through several measures to further reduce costs and increase efficiency. For example, we are examining ways to use the data acquired from running the train to monitor and diagnose various ground facilities to increase maintenance efficiency.

We have developed high temperature superconducting magnets that are structurally simple and improve maintainability. Many refinements were made to these magnets and they are currently installed on the train to confirm their durability.

We have confirmed that the current level of comfort inside the maglev train is the same or even better than that of a Shinkansen train running at the same speed. However, we are working to improve ride comfort by optimising the front end and body shape of the vehicle and refining the onboard suspension.

We have started manufacturing a new maglev train that will be an improvement on the current series L0 train. The new train is expected to debut in spring 2020.

The new train will have:

As we move towards finalising the specification for the revenue service train, we will continue to improve ride quality through verifications of the test running results.