Thales and Albtal Transport have equipped a Karlsruhe tram-train for autonomous operation and successfully demonstrated it at Grade of Automation 3 (GoA3) in a depot. As Dr Amine Arezki, head of strategy for autonomous trains with Thales, Germany, explains to David Briginshaw, the two partners now plan to launch a two-year project to achieve autonomous operation on the network. 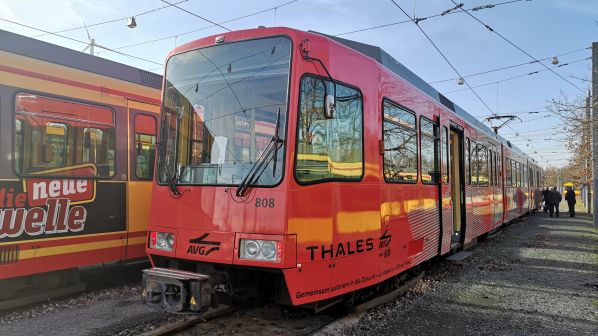 The test train at the depot in Karlsruhe.

THALES and Albtal Transport (AVG) are very proud of the fact that they have achieved autonomous operation at Grade of Automation 3 (GoA3), albeit in a depot, with a Karlsruhe tram-train in just three months. The two parties signed a memorandum of understanding for an autonomous train demonstration project at InnoTrans in September 2018 and by mid-December the first trials at a depot belonging to Karlsruhe Transport Authority (VBK), a sister company of AVG, were performed at GoA3.

“We started to think about this project one year ago,” Dr Amine Arezki, head of strategy for autonomous trains with Thales, Germany, told IRJ. “Karlsruhe considers itself as a centre for the development of autonomous road and rail vehicles and Albtal Transport and Thales Germany are both located in the state of Baden-Württemberg, which will fund the next stage. Even internally, people were really surprised how quickly we managed to complete the project.”

Arezki says this was partly due to using some existing technology from different sectors of the Thales Group and good cooperation with Albtal Transport, which provided access to the vehicle and track. Thales was also able to test some of the technology on its Lucy test train, which helped to speed up the process.

Initially, the project has focused on optimising current depot processes.
A driver needs to park the train in the depot at night at the end of a shift, but in peak periods trains queue up to leave the depot and a driver can lose up to 45 minutes. There are also nightly routines such as maintenance and cleaning, but a lot of time is wasted with drivers manually shunting trains.

The process could be optimised, and efficiency improved if the trains could park themselves autonomously and perform night time movements in the depot at GoA3, which is driverless, attended operation. This would avoid having to use highly-skilled maintenance engineers for shunting and enable them to focus on their main task.

Thales points out that there is a fundamental difference between existing driverless metros or airport peoplemovers using ATO and autonomous trains. Automatic trains operate in a closed environment, where no external events can interfere with the operation, while autonomous trains operate in an open or semi-open environment where unplanned events can occur, and the train needs to react to unexpected situations. In order to make an autonomous train continuously aware of its surroundings, the train needs to be more intelligent and equipped with the appropriate sensors to enable real-time awareness.

There are different types of sensors for rail applications: near-range, mid-range and/or long-range. The sensors are selected according to different parameters, but the main factor is the train’s speed, which determines the braking curve. Here the sensor’s detection range is crucial. The mid and long-range sensors currently used in the automotive industry have insufficient range whereas those used in defence and avionics are more suitable for railway applications.

Thales has sensors and obstacle detection technologies which have been developed by its defence and optronic business units, satellite positioning from its space and avionics division and cyber security from the security sector, and it was able to use some of this technology for the AVG project.

“One of the big challenges in rail transport is to find the right balance between safety and availability, but in fact there is none,” Thales says. If the train is continually stopping due to a false detection, availability will be seriously compromised.

Autonomous trains need reliable vision capability to safely detect obstacles in front of the train and monitor the environment around the track. This needs to differentiate between detection, recognition and obstacle identification. Detection helps to anticipate and then focus on a specific area in order to classify the type of obstacle. For example, the system needs to be able to differentiate the risk posed by a cardboard box or a fallen tree.

This is where artificial intelligence has a role to play through deep learning about the type of obstacles the train will face, and how dangerous each obstacle is according to train speed, weather conditions and track layout.

There are three different levels of artificial intelligence which can:

Thales expects advanced AI sensors to take the rail industry to the next level of operational availability, as they will be able to detect obstacles a long way ahead, and in bad weather and low light conditions. “You need to be able to detect objects 1-1.5km ahead in rail transport, rather than 150m ahead which is sufficient for road transport,” Arezki says. The sensors will also be able to anticipate situations which drivers are unable to anticipate today.”

There were two major building blocks for the AVG project: installation of ATO on the vehicle to control acceleration, braking and the safety systems, and obstacle detection. “We mainly used cameras and deep-learning intelligence to detect the type of obstacle and have the right reaction to it,” Arezki says. “Obstacle detection can take a long time to develop, but we were able to accelerate this as we had a lot of the technology in house. However, we still need to perform the safety case.

“The main challenge for all autonomous vehicle projects is obtaining safety approval because it is difficult to certify ‘black box’ algorithms. We are aiming for trustable, certifiable, and explainable intelligence. For safety critical systems, you need to detect when something is moving inside or outside the track and understand the behaviour of objects or people to be able to make the correct decision.”

While the first phase of the AVG project concentrated on autonomous operation in the depot, which is a semi-open environment where most objects are already known, the next step aims to take it to the next level: autonomous operation on the line. Thales wants to be able to demonstrate this up to GoA4, which means unattended operation. “We are targeting everything so we can offer customers what they want,” Arezki says. “Outside the depot, there will be more objects and we will have to consider vehicle motion and speed - AI is very good for this.”

Phase 2 will be conducted in cooperation with Karlsruhe Institute for Technology (KIT). The partners are waiting to secure funding and Phase 2 will take 1.5 years to complete. “There is a good business case for Phase 2 from the customer side which is driven by time saving, and improved safety, security and flexibility,” Arezki says.

Thales is also involved in French National Railways’ (SNCF) autonomous passenger train project along with Bombardier, Bosch and Spirops, a start-up company. The five-year contract was signed in September and will involve equipping a Bombardier Francilien commuter EMU for GoA4 with the objective of developing a prototype for operation at GoA3 and GoA4 by 2021, followed by two years of trials. Thales is responsible for the vehicle, ATO and cyber security.

“We want to go at the speed of the market, and we are looking at other projects,” Arezki says. He believes the benefits are huge in terms of increased capacity, greater operating flexibility, improved safety, and lower operating costs. With German Rail (DB) also looking at autonomous operation, the introduction of this technology for mainline passenger and mixed-traffic railways is well on the way to becoming a reality.