Kiruna Wagon was founded in 2004 as a private spin-off of Swedish mining company LKAB and has subsequently established itself as a major supplier and maintainer of wagons in Scandinavia. Managing director Fredrik Kangas outlined the company’s future strategy to Kevin Smith. 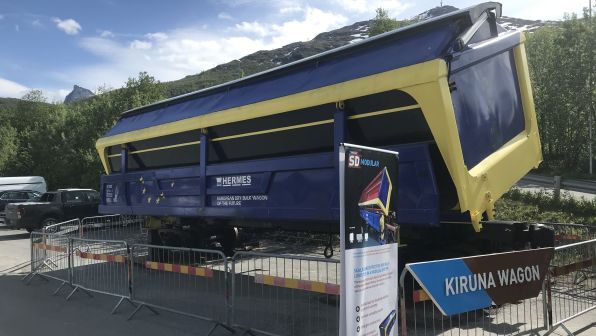 Kiruna Wagon’s SD Modular on display at IHHA in Narvik.

ONE of the two outside exhibits at the International Heavy Haul Association (IHHA) conference in Narvik, Norway, in June was Kiruna Wagon’s SD Modular prototype.

The wagon features a side dumping system and is designed for dry bulk haulage. However, the modular system means it is possible to interchange tailor-made load carriers with the company’s patented ultralight wagon underframe, including tank wagons, gondolas or flat wagons for the transport of TEUs.

The SD Modular wagon was developed under the European Union-funded Hermes project, which seeks to enhance the productivity, flexibility and reliability of rail freight. The launch customer is Iberpotash, a Spanish salt mine company, which ordered 64 of the SD wagons in 2014. However, a 50% drop in the price of potash led the company to pursue a different strategy, purchasing 13 older models from Kiruna Wagon and delaying plans to improve their logistics capability.

While a disappointment, Kiruna Wagon’s managing director, Mr Fredrik Kangas, speaking to IRJ in Narvik, says the new technology is the foundation of current efforts to expand into new markets.

Kiruna Wagon already dominates the domestic market - it has supplied LKAB and Kaunis Iron their entire fleet of ore wagons, which unload product at the port of Narvik. It has also fulfilled maintenance and wagon supply contracts with Trafikverket, Euromaint and Norwegian mining companies Boliden and Rana Gruber as well as serving operators in Finland. However, with the Kiruna plant having a maximum production capacity of 200 wagons per year, to expand further, Kangas says Kiruna Wagon needs to employ a different strategy.

“We are a small supplier with a staff of just 25 people,” Kangas says. “We use subcontractors to supply all of our components and for assembly we can license this in particular countries, making this an exportable model.”

In Europe and the United States this means partnering with operators or wagon leasing companies, which contest the tenders and offer Kiruna Wagon’s innovative products.

Kangas says this strategy helps to combat the high cost of competing abroad. He says Kiruna Wagon has been working with a Belgian company for two years to develop a proposal for a 400-wagon contract using its SD modular solution. It is still awaiting a decision. And while discussions with VTG did not materialise, negotiations with a French leasing company, look more promising. In addition, in Scandinavia Kiruna Wagon is hoping to offer the modular wagon to the paper and pulp market with discussions underway with two clients from Finland and one from Sweden.

Two members of Kangas’ team are dedicated to research and development, with a particular focus on lightweight solutions, evident in the underframe used on the iron-ore wagons, which help to maximise product load.

Innovation is also apparent in Kiruna Wagon’s Helix Dumper system, which offers a fast and efficient wagon unloading process for Kaunis Iron’s port facility in Narvik. IHHA delegates who attended the technical tour were able to see the system in action.

Upon entering the facility, it immediately becomes apparent what the distinctive wheel on the lip of Kaunis fleet of 132 wagons is for. As the wagon proceeds through the unloading station, with the wheel engaged on a track akin to a rollercoaster, the wagon is slowly but surely tipped to the left until it is almost at 180 degrees, emptying the complete ore product into the unloading station below. As the wagon continues, the wheel’s position on the track returns the wagon to its upright position.

Developed alongside Amsted, which supplies the bogies for the wagons, Helix Dumper enables Kaunis Iron to unload up to 25,000 tonnes of commodity per hour. Kaunis Iron is the launch customer for the system. However, Kangas is hopeful of exporting the technology.

In 2016 Kiruna Wagon secured a 10-year contract to licence the Helix system exclusively to Australian company RCR Tomlinson for distribution throughout Australia, New Zealand and Southeast Asia. RCR Tomlinson went into administration in December 2018, with NRW Holding subsequently buying the Mining and Heat Treat business segments for $A 10m ($US 7m) in cash in January, including the Mining Technologies assets.

Kangas signed the innovation agreement with the new company, RCR Mining Technologies, on July 5 and is hopeful that firm contracts will be secured soon; the supplier is in dialogue with Australian miners BBIG and FNG. “We are hopeful that RCR will make this happen,” he says.

Like any mining equipment supplier, Kiruna Wagon is susceptible to fluctuations in commodity prices which can dictate investment decisions. Following a dismal 2015 and 2016 where “everything had stopped,” Kangas says he saw some recovery in prices in 2017 and 2018. With new tenders now on the horizon, he says there is increased optimism for 2019 and 2020.

“The market is really starting to come back again and we will have six tenders to answer in September where our only focus will be the modular wagon,” Kangas says. “We also have various container alternatives we are quoting on. We are hoping to get something by Christmas, that is our goal. We hope that in 2020 that they will actually start to buy things again.”