Mauritius has long been a paradise for holidaymakers, but with traffic congestion placing increasing strain on the island’s environment and economy, the government is turning to light rail to provide sustainable mobility in urban areas. With the first phase due to begin operating this month, Keith Barrow profiles the Mauritius Metro Express project. 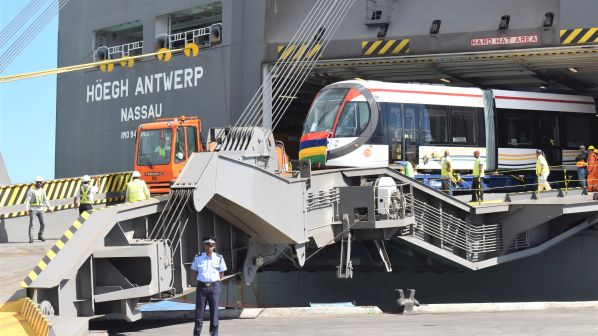 The first of 18 CAF Urbos 100 LRVs arrived at Port Louis docks in Mauritius on July 4.

RENOWNED for its coral reefs, beaches and rainforest, the Indian Ocean island of Mauritius is perhaps less well-known for its road congestion. Car ownership surged 78% between 2005 and 2014, and the country has by far the highest number of motor vehicles per road km in Africa.

Nearly 550,000 cars are now registered on an island with a population of 1.26 million. Alongside pollution and congestion, the accident rate has become a cause of public concern, with 143 fatalities on the country’s roads last year.

These factors have helped to drive the case for the development of light rail in Mauritius, focussing on the corridor from the island’s capital Port Louis to Rose Hill, Quatre Bornes and Curepipe, which is home to much of the country’s population and around 40% of road traffic.

Initially BRT was proposed but following a general election in 2010 LRT emerged as the preferred option. In September 2012 the Mauritian government appointed Singapore Cooperation Enterprise (SCE), Aurecon and SMRT to provide technical advisory services and complete a project plan for a 26km LRT line from Port Louis to Curepipe. The route largely follows the alignment of the Mauritius Government Railways Midlands Line, which closed to passengers in 1956 and freight in 1964.

The project was initially planned as a PPP but the government subsequently opted to tender works on an engineering, procurement and construction basis with a single contractor taking responsibility for building the system.

In March 2017 the Indian government agreed to fully-finance the project through a $US 275m grant to the Mauritian government and a line of credit to the State Bank of Mauritius. The same month Rites, India, was appointed consultant and project supervisor, while Systra acted as detailed design consultant.

Scheduled to open before the end of September, Phase 1 runs for 12.4km from Victoria in Port Louis to Rose Hill. The Phase 2A section from Rose Hill to Quatre Bornes will open next year, with Phase 2B to Curepipe due for completion by September 2021.

The line will be double-track for its entire length. The project involves the construction of 37 track-km of ballasted track, 13 track-km of embedded track, and 9 track-km of plinth track. Rails have been supplied by Evraz, British Steel and VAE.

Phase 1 is forecast to carry around 25,000 passengers per day, with ridership projected to reach 55,000-60,000 when all phases are fully operational.

Dr Das Mootanah, CEO of Mauritius Metro Express, told IRJ on August 16 that a “soft launch” is planned with four LRVs in operation when the first phase opens. The bidirectional seven-section Urbos 100 LRVs are being built at CAF’s Beasain plant in northern Spain. The first LRV was unloaded at Port Louis docks on July 4 and a second vehicle arrived on August 10.

Two more LRVs are due to arrive this month and deliveries will continue at a rate of one vehicle per month thereafter. The fleet will be maintained by CAF under a five-year contract at the line’s depot and operational control centre at Richelieu, which has capacity to stable up to 32 vehicles.

Dynamic testing was due to begin on a 3km section of the line between Richelieu and Barkly as the September 2019 issue of IRJ went to press. System integration is due to be completed by September 22, which will allow a week of trial running along the entire length of the Phase 1 section before its inauguration at the end of the month.

During the initial phase of operation, services will operate at 12-minute peak headways between 06.00 and 22.00, with a 5-6 minute interval service when all phases are operational. The journey time between Victoria and Curepipe will be around 41 minutes.

Mootanah says around 20% of car journeys and 10% of bus trips in the Port Louis - Curepipe corridor are expected to switch to light rail. The bus network will be recast, with 19 routes feeding into the light rail line.

The light rail line will serve 17 at-grade and two elevated stations. Six stations will be public transport hubs where bus routes will interchange with the light rail line. The Ministry of Public Infrastructure has leased land around interchange stations through a PPP programme which aims to stimulate transit-orientated development, and construction has begun on the first of these projects, the Victoria Urban Terminal in Port Louis.

“The light rail and bus fare systems will be integrated, which will help to bring about a new culture of integrated and convenient public transport on the island. This is important because Mauritius is a car country. The challenge for Mauritius is to encourage people to leave the car at home, get on board Metro Express and foster more sustainable transport.”

By August Mauritius Metro Express had recruited staff for 80% of key positions. SMRT is providing six experienced train drivers from Singapore for the initial phase of operation. Training of Metro Express’s 23 drivers began in June and they will begin to take over by the end of the year as operations ramp up.

In a country with no rail transport, a robust public communication strategy is key both to ensure safe operation of the line and familiarise residents with the system. Particular attention is being paid to educating motorists how to behave around crossings.

As the spotlight turns on the start of operation, Mootanah credits the line’s constructor and its subcontractors for delivering the first phase of the project in just two years. “I have to pay tribute to the contractor for getting an international supply chain mobilised so quickly. This has been a major feat by L&T,” he says. “The challenge now is communication, operational readiness and ensuring everyone is onboard. The people are waiting and they’re eager to see what light rail can offer.”