Voestalpine and PJ Messtechnik have developed a new concept of rail maintenance in plain track and turnouts which uses a combination of rail milling and monitoring. The process is explained by Hubert Oberhuber and Dr Johannes Neuhold with Voestalpine, Jordi Orta Roca with Barcelona Metropolitan Transport (TMB), and Dr Daniel Brandl and Benedikt Schönhuber with PJ Messtechnik. 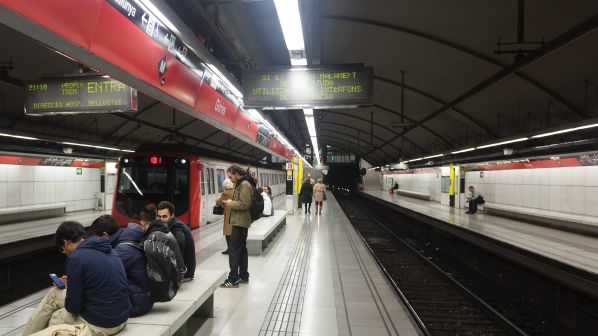 Barcelona Metropolitan Transport is detecting more wear and damage to rails and other track components as it increases train frequencies to meet growing demand. Photo: Shutterstock/BearFotos

VOESTALPINE Railway Systems and its Austrian partner PJ Messtechnik have developed a unique method of rail maintenance specifically for metros comprising smart rail monitoring and subsequent milling of rails in plain track and turnouts. This holistic concept is being applied for the first time on the Barcelona metro operated by Barcelona Metropolitan Transport (TMB).

Metro networks are being subjected to increasing train frequencies leading to ever shorter time slots for maintenance. Metro services usually start at around 05.00 and finish approximately at midnight, but some cities are already running 24/7 operations, particularly at weekends. For track inspection and maintenance teams, this means important track work needs to be carried out within very tight timeframes. The main drivers for rail maintenance in metros are operational damage such as rail wear, corrugations and rolling contact fatigue defects (head checks) as well as system-caused defects such as squats.

Due to its long history - the first line opened in 1924 - and the high service quality, the Barcelona metro is a best-practice reference for metros on the Iberian Peninsula as well as in Latin America. Currently, the network comprises eight lines, mainly in tunnels. The lines reflect the development of metro designs throughout the past century - from the 1668mm-gauge Line 1 to the tight tunnels on Line 5 and the fully automatic operation on lines 9 and 10. The metro is electrified using overhead catenary rather than third rail to ease track maintenance and the exchange of superstructure components. Particular challenges for TMB are the different and changing soil conditions, subsoil waters, and the steady requests and guidelines made by different district administrations. Additionally, local residents complain about noise and vibrations in their homes.

Due to increasing passenger demand, TMB needs to steadily increase train frequencies, leading to more wear and damage to rails and other track components. The Covid-19 pandemic has increased pressure on TMB as it is required to comply with social distancing rules for passengers and consequently is running more trains.

As traditional rail maintenance procedures including rail grinding could no longer meet these increasing challenges, TMB decided to look for new technologies. The main objective was to re-profile the rails as poor rail-wheel-contact geometry not only results in temporary speed restrictions but also increases wheel wear. TMB also wanted to eliminate corrugations, which are a major driver of vibrations and noise. Therefore, TMB decided to tender rail treatment services for 50km of track, several turnouts and additional track measurement campaigns in order to analyse the rail conditions before and after the intervention.

To determine the rail condition in terms of rail wear and corrugation, a customised sensor concept was developed that can easily be fitted to standard metro cars.

For this task, a sophisticated line-laser measurement system is used, which can be installed easily beneath a TMB maintenance vehicle (Figure 1). This system allows the transversal rail profile to be analysed according to the European Standard EN 13231-3 as well as the track gauge with a resolution of 25cm or more. The transversal profile as well as the track gauge must be within a certain limit to ensure proper contact between wheel and rail. The upper diagram on the right in Figure 1 illustrates an example of the comparison between the measured (blue) and nominal (red) rail profile. Vertical rail wear can be derived from the measurement data which is important when deciding whether a worn-out rail should be re-profiled or replaced. The two bottom diagrams in Figure 1 provide an example of the vertical rail wear determination.

Corrugation plays a significant role in ride quality and the length of rail and vehicle life. Corrugations are detected using acceleration sensors mounted on the axleboxes, as part of an extensive measuring system designed by PJ Messtechnik. Corrugations lead to measurable vibrations on the vehicle, and this type of detection is highly efficient due to a high measuring rate combined with a conveniently small amount of data. A Campbell diagram of the accelerations illustrates the results. An example of this for an entire line is shown in Figure 2. The localisation of the measuring data is mainly achieved by using signals from hall effect sensors combined with a pole wheel.

Short pitch corrugations typically occur between 25mm and 80mm, with an amplitude of up to 100µm. Segments with strong vibrations and possible occurrence of corrugation are indicated in red. On the analysed line in Figure 2, this becomes particularly clear in the curves between Kilometer 4 and 6.

The PJ Messtechnik measurement concept installed on a maintenance vehicle together with the rail profile measurement system contains many more sensors, for example to determine track twist or superelevation, which can be used for future applications.

Due to the special conditions in metros, tailor-made approaches for rail maintenance are required. To meet these demands, rail milling provides an optimal solution. In contrast with conventional rail grinding, the milling process introduces a much lower amount of energy into the rail itself and the rail heats up only to a small extent, thereby avoiding material transformation in the rail surface. In addition, milling does not produce either dust or sparks thereby reducing the fire hazard to a minimum which is especially relevant in metro tunnels.

Voestalpine Railway Systems is using its MG11 rail milling machine, built by Linsinger, in Barcelona. This machine is well suited for use in metros due to its compact design that enables it to fit into even the smallest profile tunnels. It is possible to remove between 0.3mm and 1mm of rail material per pass and to reach a track milling speed of up to 600m/h. The waste product of the milling process are chips that are collected and stored on the machine for subsequent recycling.

The machine can be transported to the customer by truck or inside a 40ft container. The MG11 can be self-propelled on the metro network at speeds up to 50km/h. The track gauge is adjustable and can be varied between 1000mm and 1668mm. The MG11 includes a cross play limitation which also makes it possible to mill in superelevated tracks. Additionally, a special module allows rail milling in turnouts (see photo above).

During deployment in Barcelona, milling was executed on around 50km of track and several turnouts. The effectiveness of the milling is shown by an example of transversal (Figure 3) and longitudinal rail profile (Figure 4) before and after milling.

As the diagrams illustrate, milling achieves a nearly complete removal of rail defects in the transversal and longitudinal directions and establishes a “like new” rail condition. This creation of a precisely defined rail condition regardless of the initial state is called regenerative maintenance. This is quite different from the classic approach of corrective maintenance, where the initial rail quality plays an elementary role and, in most cases, residual rail damage remains. A failure-free rail is also the basis for a successful application of a cyclic-preventive maintenance regime. This approach retains an accurate rail condition for as long as possible to maximise rail service life (Figure 5) and can also be applied optimally with the milling technology.

This measuring concept makes it possible to determine the rail condition of the entire network in a short time and with manageable effort. The results form an optimal basis for rail maintenance planning and checking the effectiveness of maintenance actions.