The replacement of life-expired trams on established light rail networks and continued investment in new lines helped to fuel a 43% increase in the sale of light rail vehicles last year, according to data from IRJ Pro. Jonny Dearden, market researcher for IRJ Pro, explores the factors driving growth and looks ahead to the prospects for 2017. 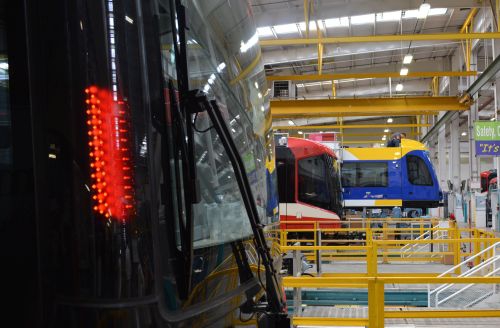 THE global market for light rail vehicles grew substantially in 2016, according to research carried out by IRJ Pro for the Fleet Monitor online portal for rolling stock market data.

2016 saw a 43% year-on-year increase in orders for LRVs and growth was mainly driven by activity in Europe and North America, where substantial orders propelled the global ordered vehicle count to 1454.

Substantial LRV orders for 2016 included a Roubles 56bn ($US 877m) contract for 300 vehicles for Moscow tram operator Mosgortrans, which was awarded to a Russian joint venture of Transmashholding subsidiary Metrowagonmash and PK Transport Systems. Outside the capital, government policy has helped to drive the renewal of ageing fleets in other cities. Under the urban transport decree, the state agreed to refund fixed amounts including Roubles 8m per single-section tram and Roubles 15m for a 100% low-floor articulated tram. To be eligible for the subsidies, the manufacturer had to be based in the Eurasian Economic Space and the LRVs had to be manufactured in 2016. The combination of large domestic orders and subsidies indicates a desire to strengthen the position of domestic suppliers. This would help to circumvent any problems caused by any future fluctuation in the value of the rouble, which has previously caused difficulties for orders with international suppliers.

Elsewhere, CAF continued to expand its orderbook throughout 2016. De Lijn, Belgium, placed its largest ever tram order when it awarded the Spanish supplier a e320m contract for 146 LRVs. The order will enable the replacement of the coastal fleet and PCC trams in Antwerp and Ghent, while increasing fleet capacity for new lines. CAF was also selected by Amsterdam Municipal Transport (GVB) for a contract to supply 63 low-floor bi-directional LRVs with an option for a further 60 vehicles.

CAF also performed well outside Europe, with orders for LRVs coming from Maryland (26 vehicles) Canberra (14 vehicles) and Sydney (six vehicles). CAF will view its success in the international market with increasing importance following the lack of domestic orders in Spain.

Alstom’s new vehicle orders slowed significantly from 229 in 2015 to 106 in 2016. Algeria accounted for almost half of these vehicles, with orders for Citadis LRVs from Sétif (26 vehicles) and Mostaganem (25 vehicles). These will be supplied as kits, which will be assembled locally by the Cital joint venture (JV) of Alstom, Algiers Metro Company (EMA), Ferrovial and Algerian National Railways (SNTF). Alstom also maintained its dominance of the French LRV market with orders from Caen (23 vehicles), Paris (22 vehicles) and Bordeaux (10 vehicles).

Bombardier’s orders for new vehicles were also slightly down, falling from 196 in 2015 to 142 in 2016. Despite losing out to CAF on the De Lijn order, Bombardier secured a contract from Zürich City Council for 70 Flexity 2 LRVs, which will be delivered from 2018 onwards. Another key win came from Gothenburg, where a consortium of Bombardier and Vossloh Kiepe clinched a contract for 40 low-floor vehicles. Bombardier also agreed orders for 20 Flexity Freedoms for Edmonton and 12 Flexity Swift ETs for Karlsruhe.

Stadler received orders for 63 LRVs in 2016, compared with 42 vehicles in 2015. These included the first order for the Stadler Minsk Metelitsa tram, with a contract for 23 units from Transportnaya Koncessionnaya Kompanya (TKK), a consortium of Lider Group and LSR Group, in St Petersburg. Stadler’s second order for the Metelitsa and first order in the Czech Republic, came from Ostrava which ordered 40 uni-directional vehicles.

Orders for the Polish LRV suppliers (Pesa, Modertrans and Solaris) held steady at 37 vehicles in 2016, down from 41 in 2015. Modertrans received an further orders for its Moderus Beta tram from Poznan (10 vehicles) and Wroclaw (three vehicles). Pesa meanwhile, secured international orders from Kiev (10 vehicles) and Sofia (five vehicles). Solaris received an order for five extra Tramino vehicles from Leipzig City Transport (LVB) as part of a framework contract for up to 41 vehicles, which was awarded in March 2015.

Siemens continued to dominate the LRV market in the United States, with new vehicle orders increasing from 123 in 2015 to 200 in 2016. Sound Transit placed a $US 554m order for 122 vehicles to support the expansion of Seattle’s light rail network. Other orders included S70s for San Diego (45 vehicles), Minneapolis (27 vehicles) and Charlotte (six vehicles).

The prospects for the US market are uncertain. According to IRJ Pro Project Monitor, there are 65 light rail projects at differing levels of progress throughout the United States, 15 of which are currently under construction. However, with the Trump administration’s 2017 budget threatening the abolition of the popular Transportation Investment Generating Economic Recovery (Tiger) grant programme, many light rail projects may be left unfunded.

By the end of March IRJ Pro had recorded orders for 177 LRVs since the start of 2017, but while business looks set to remain brisk through the remainder of the year, volumes are unlikely to reach the levels seen in 2016.

In January, CAF clinched a contract to supply 22 seven-section Urbos 100 vehicles for the Utrecht - Nieuwegein/ IJsselstein fast tram line, which will give the Dutch city a standardised fleet of CAF LRVs. Strasbourg Transport Company exercised an option with Alstom for 10 additional Citadis LRVs, and the manufacturer also secured an order for 15 Citadis X05 low-floor vehicles for the second phase of the Circular Line in Kaohsiung, Taiwan. Berlin Transport Authority (BVG) exercised an option with Bombardier for 21 additional Flexity low-floor LRVs.

The Polish market continues to generate business for domestic suppliers. Since the start of the year Pesa has secured orders for additional LRVs from Bydgoszcz (18 vehicles), Gorzów (14 vehicles) and Lodz (12 vehicles), while Modertrans achieved a breakthrough for its new Moderus Gamma low-floor LRV, with an order for 23 vehicles from MPK Poznan.

In February, Ukrainian supplier Tatra-Yug broke new ground when it received an order for 15 high-floor trams from the Egyptian city of Alexandria.

CRRC Qingdao Sifang announced in March that it has been awarded a contract to supply eight hydrogen fuel-cell trams for the Gaoming Line in Foshan.

Several much larger procurements are also underway. Warsaw launched tenders on February 8 for a contract to supply up to 213 LRVs from 2019 onwards. The order will comprise a firm order for 123 vehicles with a single option for 90 more. Tendering is underway in Manila for 120 vehicles for Line LRT1 and Oslo is expected to finalise an order for 87 vehicles later in the year. In Germany, Bremen Tramways will conclude a contract for 67 vehicles.

With further major orders in the pipeline for established networks in Brussels, Bucharest and Philadelphia, and smaller orders for new lines planned in many cities around the world, the LRV market looks set to remain buoyant in 2018 and beyond.