Making the case for rail at COP26

The International Union of Railways (UIC) and International Association of Public Transport (UITP) will lead the rail and public transport lobby at this month’s COP26 in Glasgow. Philip Turner and Lucie Anderton, the UITP and UIC’s respective heads of sustainability, explain to Kevin Smith what they hope to achieve. 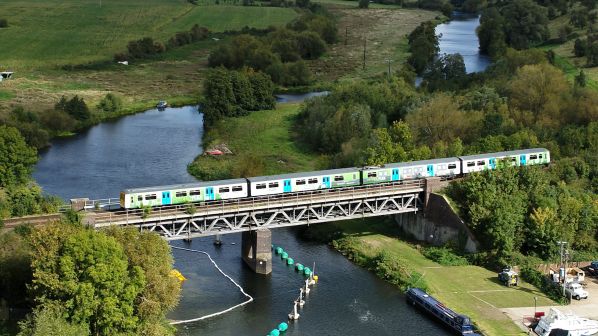 THIS month’s COP26 in Glasgow comes at a critical time for the earth’s climate and the future of humanity. Five years after the Paris Agreement, each country that signed up is now required to update their climate strategy and Nationally Determined Contribution (NDC) to limit carbon emissions and reduce global temperatures to well below 2˚C and ideally 1.5˚C.

Unfortunately, if reports leading up to the event are anything to go by, many people are likely to be disappointed. Reductions of carbon emissions of 40% by 2050 are projected under current policies, alarmingly short of the net zero target. However, for Mr Philip Turner, head of sustainability at the International Association of Public Transport (UITP), as disheartening as this is, it is also an opportunity for public transport.

“The transport sector is a significant source of emissions, 23-25% depending on where you are, so sustainable transport has to be a fundamental part of every single National Climate Strategy,” Turner says.

He says a three-pronged approach to reducing transport emissions is favoured: avoid, shift and improve. “These three things do not feature in all these climate strategies,” Turner says. “One area that is typically under-utilised is the shift [to more sustainable modes.] I think it is currently in less than half of the strategies, and this is where public transport and rail have a significant role to play. There is a great opportunity to scale up that ambition, which do not forget, is in a country’s economic interest.”

UITP will be joined at COP by the International Union of Railways (UIC). Both associations are official observers of COP recognised by the United Nations as global voices for rail and public transport. Alongside their members, they will make the case for greater support and recognition for rail and public transport as a solution to the climate crisis.

“Rail travel makes up 10% of global mobility but only 0.3% of greenhouse gas emissions.”

Ms Lucie Anderton, head of the sustainability unit at UIC, who is currently on secondment from Network Rail, says a successful COP would offer a broad agreement on how to achieve the shift and decarbonise transport quickly this decade. Unlike electric cars and hydrogen planes, which were dominating the conversation in the lead up to the event, Anderton says much of the railway is already electrified and this point must be heard.

“Rail travel makes up 10% of global mobility but only 0.3% of greenhouse gas emissions,” Anderton says. “If we want to achieve net zero by 2050 we have to double rail’s modal share. There is so much focus on electric cars but we’re forgetting that three-quarters of railway journeys globally for passenger and freight are already made under wires. There is already electric mobility.”

“The quickest and most cost-effective way to decarbonise people’s mobility - and we’re talking about people who cannot afford an electric car - is to get them onto public transport,” Turner says. “The behavioural change factors are so important but are often overlooked, including by the UK presidency. This is where UITP and UIC are bringing that important message, that you are missing this opportunity as many of the solutions you are talking about are not necessarily applicable for the rest of the world.”

In its Vision 2030 document, which was set to be published on October 29, the UIC describes rail as the only viable option to significantly reverse increasing emissions from transport while improving equity and quality of life. Anderton says the UIC wants “real targets” that set “real ambition” for modal shift as well as “real fiscal policies” that incentivise rail use.

“We’re talking about carbon taxation methods and removing subsidies from highly polluting modes,” she says. “Aviation gets away with a lot of taxation. It is really easy to drive a truck across Europe but there’s so much more paperwork and cross-border difficulties with driving a train.”

Turner says as well as affordable, public transport must also be attractive to secure the required modal shift. However, encouraging people to make this step is difficult and he thinks there should be a greater role for local decision makers as they tend to have a better understanding of their citizens. He adds that it is important to recognise the human element and the fact that investing in public transport opens up social and economic opportunities.

A variety of side and fringe events are planned for Glasgow, the most visible of which are demonstrations of the Hydroflex hydrogen train while Vivarail will show its battery-powered D-Train.

Turner says that COP is taking place at all is a major achievement in the context of the Covid-19 pandemic. He says it is critically important that people are in Glasgow in person to discuss the issues as this presents the best chance of achieving anything meaningful. And with less people expected to be present in general, this is a great opportunity for rail and public transport, which will be heavily represented, to get its message through.

“This is the decade for action,” Anderton says. “There are short and medium-term actions that we can take now in public transport - talking about 2050 is irrelevant if we do nothing for 10 years. If we wait for the hydrogen plane to arrive in 2045, we have missed out.”