The Malaysian government is undertaking a substantial investment programme to improve the KTM network. Paul Bigland reports from Kuala Lumpur on the latest developments. 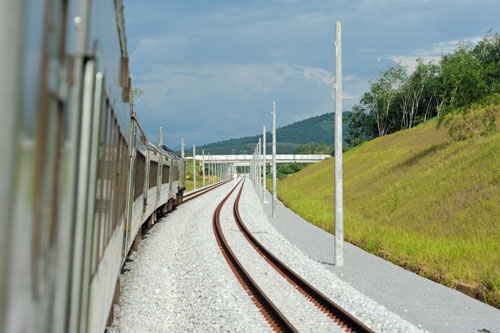 MALAYAN Railway (KTM) has suffered a hard time recently, running up large debts, suffering poor reliability, a drop in freight receipts, losing 10% of its passengers on the KL commuter network and suffering problems with its inter-city services.

However, the tide appears to be turning, and the Malaysian government has instituted a substantial investment programme. The management team has also been shaken up with the appointment in 2009 of Dr Aminuddin Adnan who was charged with turning the railway around.

Aminuddin was brought in from Express Rail Link (ERL), the owner and operator of the successful Kuala Lumpur International Airport (KLIA) Express train service, and three years into his job at KTM, he says he considers cultural changes within the organisation to be just as important as government investment. "If you don't change the acumen of the people the investment the government is putting in won't pay dividends," he says.

A good example of this is the new Electric Train Service (ETS) from Kuala Lumpur to Ipoh. Aminuddin says this was set up as a separate business unit under the leadership of CEO Mr Azizullah Kinayatullah, a dynamic former lawyer who built ETS into an award-winning and profitable operation.

Their modern regional emus, staffed by enthusiastic young people, offer a premium service which far exceeds the old inter-city brand in terms of speed, quality and comfort. The journey time has also been slashed from 5h to 3h, with one train even completing the 206km trip in 2h.

This new strategy is already paying dividends. Replacing the old Kuala Lumpur - Ipoh shuttle with ETS generated Ringgits 24m ($US 7.8m) in revenues in 2010 compared with only Ringgits 8m a year from the shuttle service. It is results like this which make Aminuddin believe he can return KTM to profitability by 2015.

Now Azizullah has been given the challenge of achieving the same transformation with inter-city, where he took over as the chief operating officer in March, and he is already overseeing some major changes.

"We are introducing 14 new inter-city coaches which are being built by PT Inka in Indonesia right now," he says.

"I visited their facilities in April and when we have the stock ready I want to introduce a new daily service from Kuala Lumpur to Singapore. Long term I want to see the inter-city services offer the same level of quality as ETS and attract more business travellers by offering better meals and also Wi-Fi."

He also plans to target the tourist market where he feels there is tremendous untapped potential to offer similar premium-fare services which might even be served by steam locomotives. "I'm looking at options for dining trains. And even though we cannot serve alcohol, I believe we can attract people from the cruise ships docking at Port Klang," he says.

A similar turnaround is required on KTM Komuter services which have lost 10,000 daily passengers due to poor reliability and train frequency. KTM has subsequently received a lot of complaints and negative media coverage as its overstretched emu fleet struggles to maintain services.

"The full fleet will be in service by the end of the year," Aminuddin says. "Then we will gradually refurbish some of the older emus which will be used with the six-car trains to increase capacity and improve frequency, with trains running every 10 minutes instead of every 30."

It is hoped that the revamped services will increase ridership from 90,000 to 300,000 passengers per day. The Chinese trains have capacity for 1100 passengers and will be maintained at KTM's main depot at Batu Gajah which opened in 2010 replacing the former Sentul workshop. However, this involves moving the new trains a substantial distance from their core route so a new depot will be built at Seremban, south of Kuala Lumpur within the next two years.

Despite introducing a 'Landbridge' service, which sees 40 container trains crossing the Thai border each week, freight volumes have declined significantly in recent years. Freight revenue fell by 50% in 2009 following the withdrawal of services to and from Singapore and the failure of State Railway of Thailand to provide adequate train capacity to support KTM's cross-border services. Locomotive failures and problems with poor-quality Chinese-made wagon bogies have been all too common.

Aminuddin says that setting up a joint-venture company between the two operators will tackle these problems enabling freight revenue to grow. KTM Kargo also plans to expand its range of freight facilities with a new container terminal at Mentakab which will bring freight back to the east coast line for the first time in many years.

These efforts are being aided by the programme to transform Malaysia's single-track colonial-era West Railway, which runs the length of the mainland from Johor Bahru to Kuala Lumpur, Ipoh and Padang Besar, into a modern, 160km/h, high-capacity electrified route for both passengers and freight.

It is an ambitious and expensive project. The 329km northern section from Ipoh to Butterworth and on to the Thai border includes some impressive civil engineering. For example the new 3.3km Berapit tunnel avoids the steep incline around Bukit Berapit, while 28.8km of viaducts which span ground prone to flooding will improve rainy-season reliability.

This section is due to open by 2013 with the simpler 97km southern section from Seremban to Gemas, which is the junction of the east coast line, due to open this year. Contracts for the 197km third and final phase south from Gemas to Johor Bahru have yet to be awarded although the plan is for the work to be completed by 2016.

Plans for a dedicated high-speed line from Kuala Lumpur to Singapore are also still firmly on the agenda with a feasibility study into the route getting underway in February. This will take 6-12 months to complete, and with the high-speed line considered a high-impact project in the government's Economic Transformation programme, the omens for further development look encouraging.

However, Malaysia's Land Transport Commission (Spad) says the emphasis on improving links to Singapore for now is on extending the city state's existing metro to Johor Bahru. Iskandar Regional Development Authority (Irda) CEO Mr Ismail Ibrahim says that work on the extension of the Thomson Line would have to begin this year or next to meet the aim of opening the link between 2018 and 2020.

In addition to the metro extension, the Malaysian government is currently considering proposals for the multi-billion Ringgit commuter network in the Iskandar region centred on Johor Bahru which would also improve links to Singapore.

Metropolitan Commuter Network (MCN), a joint venture between Kub Malaysia and Malaysia Steel Works, is so far the only bidder to have submitted a development plan. MCN proposes developing a Ringgits 1.23bn network consisting of 100km of lines that would serve all the major suburbs and include seven new stations. A shuttle service from Johor Bahru Central to Woodlands in Singapore is also included in the plans.

However, contrary to reports, Ismail told Malaysia's StarBizWeek at the end of March that the project is still open to other prospective bidders. "Although one company has submitted the proposal for this date, it doesn't mean that the project is exclusive for that company," Ismail says.

With major improvement work already underway, there is likely to be significant demand for new rolling stock. Aminuddin says that new electric locomotives will be purchased, although he was unable to give an indication of what their specification might be.

He added that while an environmentally-friendly agenda does not yet feature highly in Malaysian life, he feels that having an efficient electrified railway will be useful to the government because it could lead to a reduction in the huge subsidies that underpin diesel fuel prices, saving money and supporting the policy to increase public transport usage by 50% by 2020. The Malaysian government spent around Ringgits 20 billion on fuel and cooking gas subsidies last year, almost double the amount spent in 2010.

Rebuilt locomotives might also ease the strain on KTM's fleet. SMH Rail has extensively rebuilt and re-engineered a redundant KTM class 24 diesel locomotive, fitting it with a GE power unit. The locomotive is currently being tested by KTM and if successful, could potentially lead to an extensive rebuild programme.

In addition to locomotives, Aminuddin says that a further 20 emus will be ordered for inter-city services, replacing locomotive-hauled coaches on all services on the new main line apart from the international train. No details are available yet, with Aminuddin stating that the contract would be decided by the Ministry of Finance, although KTM will have input into the technical specification.

With such significant sums being spent on network improvements, rumours have resurfaced about a potential re-privatisation of KTM following a failed effort between 1997 and 2002. Malaysian company MMC is currently carrying out due diligence studies into KTM to establish whether a workable proposal can be brought forward. MMC is already involved with the railway as a contractor on the track-doubling projects, and last year the company confirmed it is interested in taking over, offering to invest Ringgits 1bn in KTM.

Aminuddin is tight-lipped about any suggestion of a future privatisation, saying only that such a proposal would depend on the government's response if a bid from MMC was forthcoming following the completion of their feasibility study.

The private sector is already involved in other areas of the railway; SMH Rail holds contracts to overhaul and maintain the modern class 26 and 29 diesel locomotives as well as parts of the wagon fleet, and Aminuddin does admit that there is a need for change.

He believes that franchising the services for 30-year terms would be a logical way forward for Malaysian railways, which would certainly be a practical solution. For example, as the ETS service is a separate business unit from inter-city, it would be relatively easy to float it as a franchise. And as a profitable service it would be attractive to prospective bidders.

The government and the Finance Ministry, which owns KTM, may also see privatisation as a way to tackle the company's debts; KTM had Ringgits 1.45 billion in cumulative net losses up until 2008. Another attempt at privatisation will inevitably be met with fierce opposition from the Railwaymen's Union of Malaya (RUM) due to fears over the future of the railway's 5500 staff. Yet with the substantial investment programme going ahead to improve services and increase passenger numbers, both on the mainline network and on transit services in Kuala Lumpur, private investment in Malaysian rail services could be a logical next step for a railway that has suffered its fair share of hits in the past few years.