Severe rolling contact fatigue was identified across the Auckland Metro Rail Network in 2019, necessitating the implementation of a temporary speed restriction the following year. David Burroughs analyses the report commissioned to determine the causes of the track issues and its recommendations for how it can be avoided in future. 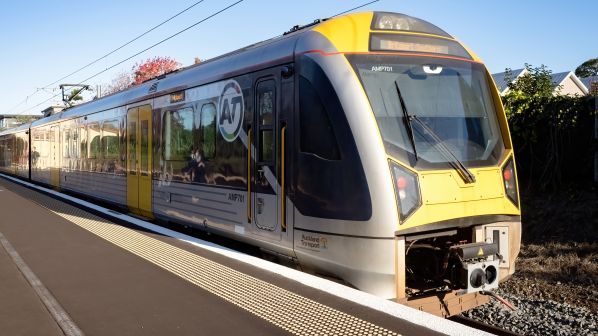 New CAF EMUs, operating on track that was not fit for purpose, combined to exacerbate the rolling contact fatigue issue on the Auckland network.
Photo Credit: Shutterstock/Emagnetic

THE identification of rolling contact fatigue (RCF) across the Auckland Metro Rail Network (AMRN) in 2019 prompted the implementation of a blanket 40km/h temporary speed restriction in 2020 and the establishment of a working group to determine the cause of the issue and to make recommendations of how this could be avoided.
The group found it was a combination of the sub-optimal condition of the infrastructure and the introduction of new EMUs across the network, which contributed to the propagation of RCF.

RCF is the damage created in rails and wheels due to high contact stresses. In the rail, this damage usually appears first on the surface with cracks forming in the direction of travel. If untreated, the cracks then dip downwards as they propagate, eventually creating a risk of sudden failure, although they can be removed through grinding before they reach this stage.

The requirement to bring the AMRN infrastructure up to standard was identified in 2014, when Auckland Transport (AT), which is granted rights to the network by national railway KiwiRail (KR), engaged Network Rail Consulting to evaluate the overall state of the infrastructure. The study was commissioned prior to the introduction of AM class EMUs delivered by CAF, which are operated by Transdev Auckland under a concession from AT. A small number of DMUs operate on the 19km non-electrified section of the passenger network between Papakura and Pukekohe, although these are due to be phased out from September 2022 and replaced with buses until the second half of 2024 while the line is electrified.

The 2014 evaluation concluded that an investment of $NZ 100m ($US 71.1m) was required in the AMRN’s track assets to ensure they were fit for purpose ahead of the introduction of the EMUs. While there was significant investment in installing additional track, including track doubling and branch lines, stations, signalling, overhead lines, and the rolling stock, there had been no investment to upgrade the existing track and civil infrastructure.

However, the investment was not approved by the government and AT and KR instead decided to rely on increased inspections and speed restrictions for safety while accepting that the infrastructure would provide lower levels of service.

In March 2019 AT engaged consultants WSP to review the AMRN infrastructure prior to planned increases in services following the opening of the City Rail Link (CRL) in 2024. WSP concluded that following a 250% increase in rail patronage between 2010 and 2019, “the existing network infrastructure maintenance programmes, particularly those for track and civil assets, are struggling to support the level of traffic growth that has occurred on the network in recent years and are unlikely to be able to support forecast traffic growth.”

The WSP report concluded that the AMRN was not fit for purpose to deliver the planned increases in service and patronage, and noted emerging RCF and the accelerated spread of rail internal defects.

The rapid propagation of both early stage RCF and late-stage internal rail defects, initiated by RCF, in a significant percentage of the rails in the Auckland network necessitated the imposition of a network-wide 40km/h speed restriction on August 17 2020 while urgent rail replacement was undertaken. The accelerated growth of RCF and internal defects was found on all metro routes in Auckland, including:

The findings indicate that a significant underlying cause was most likely aged track on historic formation, which had high accumulated million gross tonne (MGT) passing with insufficient levels of maintenance, including grinding, and insufficient renewals. However, the presence of unusual wear on relatively new track in areas where only EMUs operate, as well as comparisons with the Wellington network which has a low occurrence of RCF despite similar track conditions and low levels of rail grinding, and New Zealand’s freight routes which also have low occurrences of RCF, also pointed to the likelihood of a vehicle-track interaction that is unique to Auckland’s EMUs.

A RCF working group was established in August 2020 to identify the root cause of the problems. The working group was led by Mr Ted Calvert, an independent coordinator with experience in managing multidisciplinary rail designs and projects, and included experts from KR, AT, CAF and Transdev. This was overseen by an oversight group including AT chief engineer, Mr Murray Burt, KR chief engineer, Mr John Skilton, KR executive general manager - rolling stock asset services, Mr Adam Williams, and CAF New Zealand general manager, Mr Israel Gomez.

In the Auckland RCF Working Group Root Cause Assessment Report released on August 16, the group said relying on inspect and manage “for a longer period than appears to be prudent” had necessitated the 40km/h speed limit and urgent rail replacement works.

There was no single outlier cause of the high propagation of RCG, but rather a widespread set of localised causes which stemmed from track that was not “fit for purpose” prior to the commencement of a more frequent, more demanding modern EMU operation.

Ultimately, there was no single outlier cause of the high propagation of RCF across the AMRN, but rather a widespread set of localised causes which stemmed from track that was not “fit for purpose” prior to the commencement of a more frequent, more demanding modern EMU operation.

The key track-related causes were identified as historic under-investment in the track asset between 2014 and September 2020, as well as insufficient rail grinding from 2015 to 2020. There were also multiple sites where the track condition was sub-optimal in engineering factors known to accelerate the growth of RCF, including:

Auckland’s wet climate was also likely a partial contributor to the accelerated growth.

“The closest single root cause could therefore be stated as a missed opportunity between 2014 and 2017 to implement the recommendations of the 2014 Network Rail Consulting report,” the report says.

The group found the EMUs operating on the network also contributed to the high incidences of RCF.

The AM class EMUs were designed with a high primary yaw stiffness to improve passenger ride comfort, which coincidently increases a vehicle’s propensity to cause RCF. The modelling commissioned when these were purchased did not fully assess the “RCF damage index” relating to this class of vehicle.

The wheel profile on the AM EMUs was also modified from KiwiRail’s standard profile, which is classified as TRA-1. Modelling shows that changing the AM unit wheel profile to TRA-1 would have reduced the vehicle’s propensity to cause rail RCF. However, the report says TRA-1 is unlikely to be the optimal profile and a change to TRA-1 would come at the expense of flange wear and rail side wear, requiring the use of existing on-board lubricators or trackside lubrication to mitigate this phenomenon. Modelling showed that in terms of RCF generation, the TRA-1 profile on the intermediate rail profile is preferred to the current AM class EMU wheel profile, but it is unlikely to be the optimal combination.

The report released by the working group outlines eight recommendations.

The group says that from a safety and TCO perspective it is unwise and unsafe to manage RCF and its consequential internal defects through monitoring and just-in-time removal. Instead it recommends that the strategy for RCF management in the AMRN be altered from management of internal defects to prevention. This is best achieved through planned RCF grinding at sufficient frequency to remove defects at their planer stage before they reach the downward stage.

The report also recommended that by December 2021, the entire AMRN should be free of internal rail defects, all emerging RCF should have been removed, and the intermediate profile should have been established on all wheel-rail interface (WRI) surfaces.

A KR spokesperson told IRJ that KR and AT are making good progress in addressing the recommendations in the report, including securing the funding needed to address the historic under investment which led to the poor track condition across the wider network.

As part of the Rail Network Growth Impact Management (RNGIM) project, KR replaced 130km of rail in seven months, and is now working through the progressive remediation and replacement of turnouts, sleepers, ballast and drainage across the network.

A minimum rail grinding capability should be established in New Zealand, which needs to include:

The fourth recommendation is that the AMRN grinding programme should be managed to a formal plan that at a minimum should include:

In order to reposition the AMRN to reduce RCF, the report recommends removing the key localised track contributors to accelerated RCF in the AMRN, including:

The report also recommends that the AMRN infrastructure asset is managed to a formal asset management plan (AMP), which should sit alongside the AMP for transport assets owned by AT. This will enable the exchange of knowledge and transparency of asset management and performance between KR and AT.

Recommendation seven is optimisation of the AM class vehicle wheel and the AMRN rail profile along the lines of recommendations of an inter-stakeholder technical WRI group. These profiles might be unique to AMRN. The group will also agree wear limits. Finally, the report recommends that the AM class vehicles be progressively modified to reduce their primary yaw stiffness, balanced against ride quality for customers.

KR says the recommendations have been taken onboard, and it has already begun to implement the changes required to address the issues raised in the report.

“How KiwiRail undertakes its inspection and maintenance regime is under constant review as and when new technology becomes available and this will continue,” the KR spokesperson says. “In the case of RCF, KR in conjunction with the regulator and other stakeholders, will continue to develop and fine tune its response to the identified root and contributing causes.

“KiwiRail and AT are also developing a long-term, 30-year asset management plan for the Auckland metro network, to ensure the situation that led to RCF is not repeated. A wheel-rail interface technical group continues to establish the best methods to optimise the interaction between the EMU wheels and the track.”

A rail grinding programme is underway in Auckland to mitigate the potential of RCF reoccurring on the replaced assets, and to remediate turnouts. This has been in operation since 2018 and will continue until well into 2024.

To ensure it has the required rail grinding capacity, KR is currently leasing two Speno hi-rail rail grinders, one of which has been solely operating on the Auckland network for the past 14 months. A procurement process is also underway to lease a mainline grinder.