Managing passenger flows at stations, especially at peak times, is a significant challenge for metro operators. Kevin Smith looks at the use of a system developed by Alstom and deployed on Panama metro, which by predicting future demand, is informing operational decision making and, in the era of coronavirus, supporting effective social distancing. 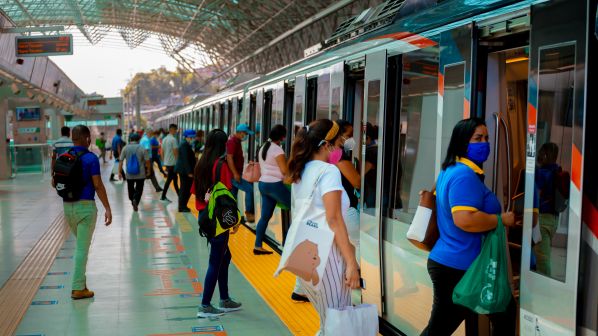 To improve its response to surges in demand, Panama Metro initiated a pilot project with Alstom’s Mastria multimodal traffic orchestrator.

PANAMA metro is Central America’s first mass transit system, and since Line 1 opened in April 2014, the network has carried more than 400 million passengers.

The popularity of the service, however, is a potential headache for operator Panama Metro. The network often becomes overwhelmed at peak times, particularly at San Miguelito station, where lines 1 and 2 interchange.
To improve its response to surges in demand, Panama Metro initiated a pilot project with Alstom’s Mastria multimodal traffic orchestrator in mid-2019.

The initial focus of the pilot was on optimising passenger flow. Mastria aggregates a variety of data of activity across the network - from operational data on the use and performance of rolling stock, to passenger activity at stations - to help support the operator’s decision-making process. For example, by foreseeing an upcoming surge in demand at a particular station up to 30 minutes before it occurs, the operator is able to release an additional train into operation to meet this need and improve operating conditions across the network.

In Panama, Mastria is collecting operational data, including the weight of the coaches, which is useful in understanding how loaded an individual vehicle is, performance data from the signalling system, as well data from tickets. Metro passengers use their ticket to enter and exit the system, providing a clear understanding of demand and use of the network, including how long someone is in the system and which specific exit they will use. Cameras are also used to monitor passenger movement while exogenous data from telecoms and the weather, which is a factor in use of public transport, are also considered.

“We are able to help them to adjust the offer in real-time to demand,” says Mr Bruno Gutierres, head of urban mobility orchestration at Alstom. “This is quite difficult when you are talking about a multi-line system, but that is what we have done. And in Panama this has helped to save three minutes for travellers at peak hours. When you transfer that to the operator, they have saved one train per day at peak hours, which is significant.”

“What we give them is a set of tools and KPIs to make the right decision at the right moment.”

The system itself relies on Artificial Intelligence to monitor and learn patterns, which optimises the suggested response to a specific situation.

Gutierres says that together with the operator, the supplier simulated various possible scenarios from which the system could learn and recommend the best response. This process does, however, take time. Mastria is not likely to accurately predict a certain situation 30 minutes before it occurs after three weeks of simulations. Yet after six months, the suggestions have a high level of accuracy due to the quantity of data retrieved, although Gutierres is keen to emphasise that the responses are recommended, with the final decision always left to the operator.

“What we give them is a set of tools and KPIs to make the right decision at the right moment,” Gutierres says. “Most of the time this will improve anticipation. What we are able to do with them - this really is collaborative work - is to build some best case scenarios, so that in the event of an incident they are able to react based on the scenarios that we have already simulated.

“After six months, you start to have good anticipation capability. By then you have collected enough data and have enough data history. But the more time you have, the more accurate your system and platform will be.”

Mastria displays its recommendations via a monitor installed in the operations control centre. While Alstom had the advantage of integrating with its own railway technology in Panama, the system is compatible with and can interface with devices provided by other suppliers via standard GTFS or BMP connections.

“Obviously it is easier if we are connected to an existing Alstom system, because we know it, but as soon as the data is available and the operator makes it available, we can connect to any system,” Gutierres says.

“After six months, you start to have good anticipation capability. By then you have collected enough data and have enough data history.”

Alstom had hoped to integrate data from bus operation into the platform as the next stage of the project. However, the coronavirus crisis and restrictions on use of the metro have presented new challenges for Panama Metro and new opportunities for Mastria.

With passengers required to maintain a 2m distance, limiting the capacity of stations and trains to 80 per car and 400 per train, 40% of the usual capacity, Mastria is helping Panama metro staff enforce the new regulations by providing data on use of the network. For example, the weight of the train provides an accurate indication of the number of people onboard. If a specific coach has already reached capacity, operators can keep the door to that vehicle closed to prevent more passengers from boarding the train. Similarly, information retrieved from cameras can inform station staff of locations where there is space for passengers to assemble so they can instruct them to move accordingly.

Elsewhere, Mastria is supporting operation of the Zaragoza bus network, a potentially more difficult application according to Gutierres due to the “surprising” nature of driver behaviour. Here, he says Mastria was able to standardise the driver’s role and the bus network in order to improve the predictability of services and offer real-time passenger information.

The flexibility of the platform to support bus operations reflects Alstom’s ultimate goal for the system: to support decision making at major transport interchanges in large cities. Gutierres says discussions over one such project are underway.

Mastria is designed to facilitate a future Mobility as a Service (MaaS) and will provide the foundation for Alstom’s offer in this area. However, Gutierres says this is not a service that one single player can offer. Instead he says Alstom’s approach is to work as part of a larger consortium with each partner supplying their own expertise to provide a comprehensive offer.

With networks under pressure to accommodate more passengers, Mastria is showing that data aggregation and Artificial Intelligence can help rail network operators to squeeze more out of what they already have. This is proving both beneficial to operators and passengers as they navigate their way from A to B.

“If you want to avoid big investments to increase capacity you have to optimise the current system,” Gutierres says. “That is what Mastria is doing: increasing and optimising the capacity of the transport network.”